Gaza health officials put the Palestinian death toll at 212, including 61 children and 36 women

Smoke rises following an Israeli air strike on a building, amid a flare-up of Israeli-Palestinian fighting, in Gaza City May 18. PHOTO: REUTERS
GAZA/JERUSALEM:

Israel bombarded Gaza with air strikes and Hamas resumed cross-border rocket fire on Tuesday after a brief overnight lull during which the UN sent a small fuel convoy into the enclave, where it says 52,000 people are now displaced.

Israeli leaders said they would press on, for now, with an offensive to destroy the capabilities of the armed factions Hamas amid calls by the United States and other world powers for an end to the conflict.

Two Thai workers were killed and seven people were wounded in a rocket strike on an Israeli farm just over the Gaza border, police said. Hamas claimed responsibility

The bombardments between Israel and Hamas in the Gaza Strip lit up the skies and sent civilians running for cover as the conflict entered its second week. More photos: https://t.co/hvexb2KuIf pic.twitter.com/zecOaDPfiT

Amid seemingly fruitless diplomatic efforts to stop the violence, the top US military officer, Army General Mark Milley, warned that the violence could spread.

“My assessment is that you risk broader destabilization and you risk a whole series of negative consequences if the fighting continues,” Milley, chairman of the Joint Chiefs of Staff, told reporters before landing in Brussels on Monday for talks with NATO allies. “It’s in no one’s interest to continue fighting.” 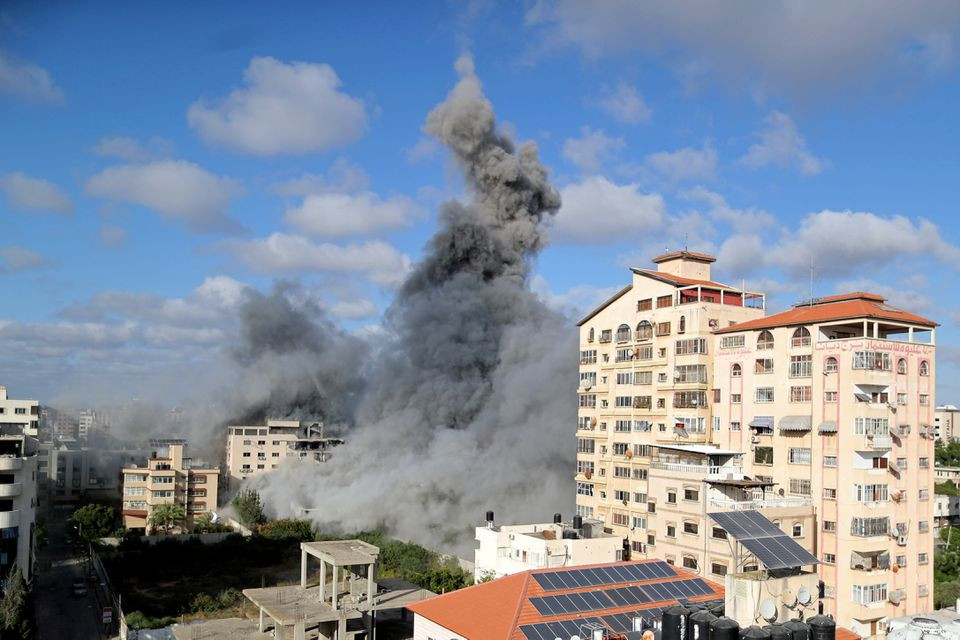 Smoke rises following an Israeli air strike, amid a flare-up of Israeli-Palestinian fighting, in Gaza City May 17, 2021. PHOTO: REUTERS

Hamas in the strip fired rockets early on Tuesday that set off sirens in southern Israeli cities.

There were no immediate reports of injuries on either side.

The overnight rocket fire from Gaza appeared to be less than in previous nights. There was a six-hour lull in rocket fire overnight before they again began being launched at dawn, according to rocket siren information from the Israeli military.

A Reuters correspondent also reported a lull in overnight rocket fire from Gaza, an enclave home to two million Palestinians.

US President Joe Biden expressed his support for a ceasefire during a call with Israeli Prime Minister Benjamin Netanyahu on Monday, the White House said in a statement. 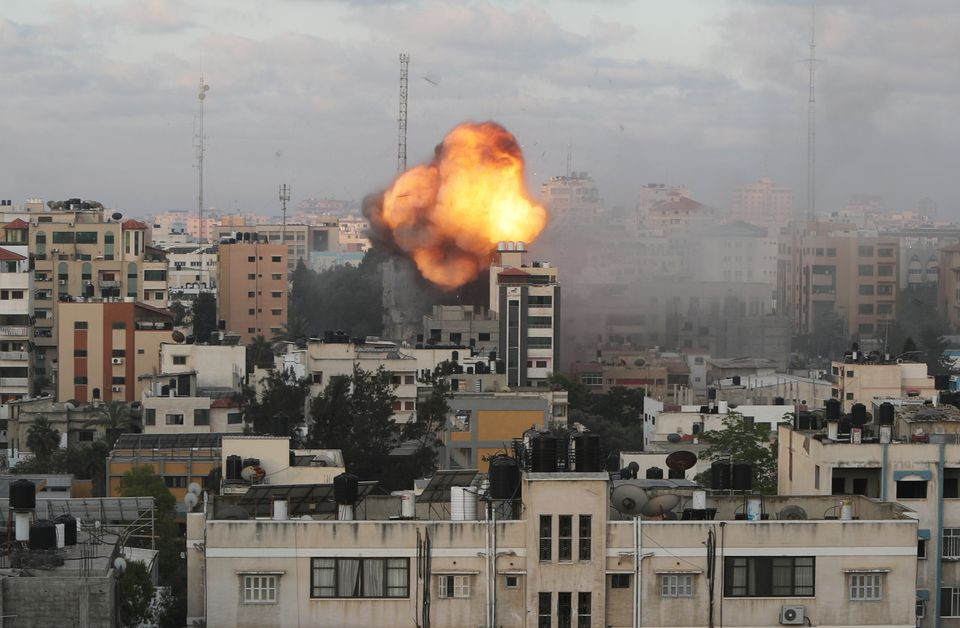 Smoke and flames are seen following an Israeli air strike on a building, amid a flare-up of Israeli-Palestinian fighting, in Gaza City May 18, 2021. PHOTO: REUTERS

But Netanyahu told Israelis earlier that strikes against sites and leaders in Gaza would carry on.

"The directive is to continue to strike at terror targets," he said in a televised speech, after meeting with military and intelligence chiefs. "We will continue to act as necessary to restore peace and security to all residents of Israel."

The armed wing of Hamas promised more rockets in return: “The criminal Zionist enemy intensified its bombing of homes and residential apartments in the recent hours, and therefore, we warn the enemy that if it did not stop that immediately, we would resume rocketing Tel Aviv,” said spokesman Abu Ubaida. 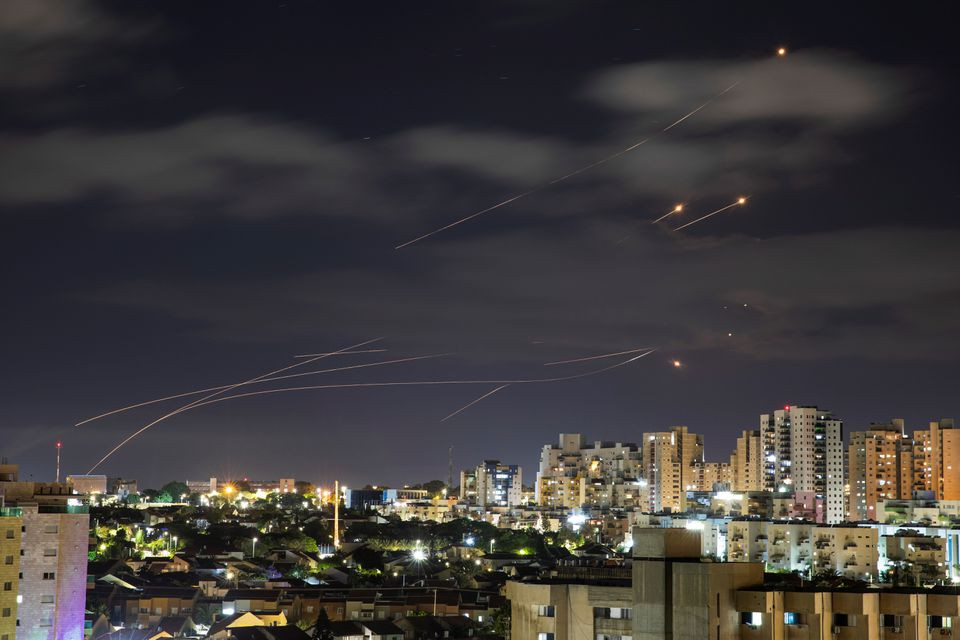 Streaks of light are seen as Israel's Iron Dome anti-missile system intercepts rockets launched from the Gaza Strip towards Israel, as seen from Ashkelon, Israel May 17. PHOTO: REUTERS

US Secretary of State Antony Blinken urged all sides to protect civilians.

Spoke today with Israeli Foreign Minister @Gabi_Ashkenazi about the need to calm tensions in Israel and the West Bank and Gaza. We must find a way to halt the conflict that has claimed the lives of Israeli and Palestinian civilians.

Although stressing that Israel had the right to defend itself, Blinken said he had not seen any evidence from Israel about its suggestion that Hamas was operating out of a building housing media outlets - including the US-based Associated Press - which was destroyed in an Israeli missile strike at the weekend.

Hamas denied having offices in the building. "These are false allegations and an attempt to justify the crime of targeting a civilian tower," said Hamas spokesman Fawzi Barhoum.

Egypt and UN mediators also stepped up diplomatic efforts, while the UN General Assembly will meet to discuss the violence on Thursday. 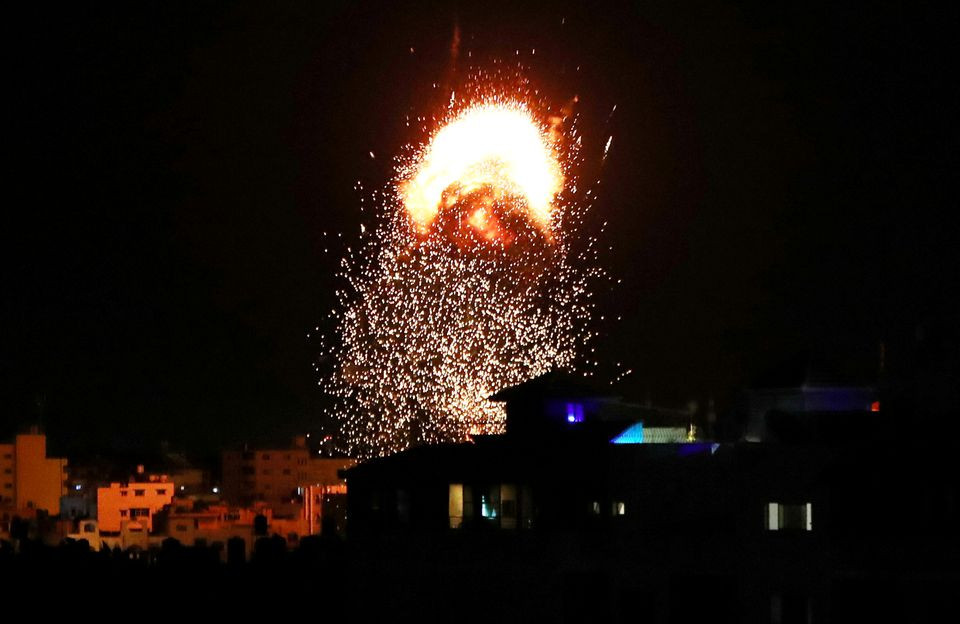 Smoke and flames rise above a building during Israeli air strikes, amid a flare-up of Israeli-Palestinian fighting, in Gaza City May 17, 2021. PHOTO: REUTERS

The Biden administration approved the potential sale of $735 million in precision-guided weapons to Israel, and congressional sources said on Monday that US lawmakers were not expected to object to the deal.

Hamas began its rocket assault last Monday in retaliation to Israeli police's violent aggression against Palestinians near the city's al-Aqsa Mosque, Islam's third-holiest site, during the Muslim holy month of Ramazan, after weeks of tensions over a court case to forcefully evict several Palestinian families in East Jerusalem.

The hostilities between Israel and Hamas-controlled Gaza have been accompanied by an uptick of violence in the West Bank, where the Palestinians have limited self-rule.

There have also been clashes between Israel's Jewish and Arab communities in mixed areas.

Israel's president has warned that tension between Jewish and Arab Israelis could devolve into "civil war".

General strikes are planned for Tuesday in Arab towns within Israel and Palestinian towns in the West Bank, with posts on social media urging solidarity “from the sea to the river.”