The documentary made by members of the Lyari Girls Cafe highlights the hazards of using plastic bags. As part of the initia-tive, the girls have also distributed roughly 11,000 handmade bags and aim to distribute 4,000 more in coming days. PHOTOS: EXPRESS
KARACHI:

Lyari may be one of the more impoverished areas of the metropolis, but that does not mean its women are any less concerned about the environment. In fact, their latest documentary on environmental protection has been nominated among seven other films for the Greenit campaign of the German Embassy in Pakistan.

The documentary, titled ‘Environment on the Frontline’, has been created by the Lyari Girls Cafe. It highlights the hazards of using plastic and its impact on the environment. It also shows young girls of Lyari distributing handmade bags among locals and asking the masses to avoid using plastic bags.

The voting process for the best documentary will continue till May 15. LGC members have taken photography and civil journalism courses and used these skills to the fullest when highlighting pollution in Lyari and Karachi.

The team comprises its head Sehrish Turk and other members including Bisma Soomro, Shazia, Tasweer Fatima Khatri, Urooj and Amjad Hussain - all of whom are residents of Lyari. Turk tells The Express Tribune that they worked on street photography to show a better image of Lyari. She adds the documentary features activities carried out by LGC which aims to raise environmental protection on a public level.

Turk says promos for the documentary were posted on social media two months ago by the German Embassy, Islamabad. She outlines that all the team members agreed to shoot a short documentary based on LGC’s environment-related activities.

Read A house of love, a sanctuary for peace in Lyari

According to Turk, her team has been affiliated with the LGC since 2017 and has been participating in awareness campaigns for women empowerment, children’s rights and environmental protection. “LGC is promoting the trend of cycling among women and providing technical training to aspiring female boxers, among other activities,” claims Turk.

She says that it took them over a month to complete the documentary and all six members of her team participated in shooting and editing the videos, while some others helped them voluntarily. The social activist hopes their participation in the documentary contest will bring the role of Lyari’s women environmentalists to the fore.

“Climate change is a global issue and we want to urge every sensible person to participate in such activities,” says Turk.

“We will be more assured of our positive work if people encourage us and vote for our video to be selected for the award,” she adds. She says their participation in this contest has instilled confidence among other women of the area and many are now willing to work on such projects.

“This experience has boosted our spirit and we want to make more documentaries to highlight the positive image of Pakistan.” 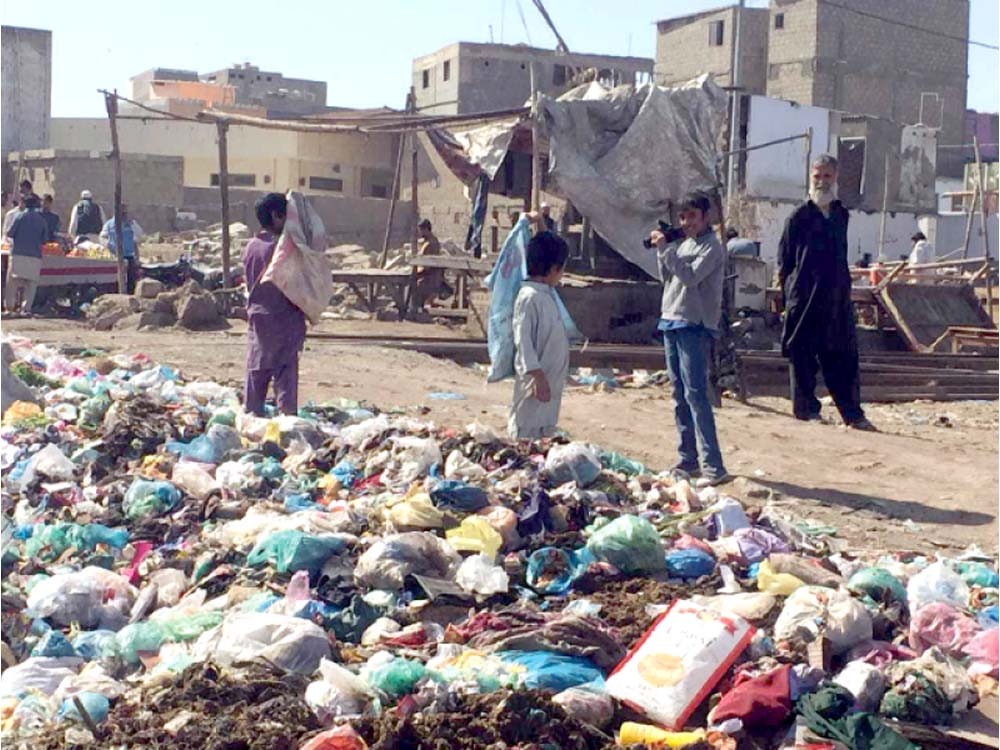 According to Turk, cycling used to be a difficult activity for women, but LGC has now made it possible. She boasts that women are now cycling and filming videos in a place where it was once difficult for them to even travel alone. She reveals that local women are also making and distributing paper and cloth bags in markets to eliminate the use of plastic.

The pandemic, lockdown and restricted moment have hampered the promotion of their documentary. “It is a challenge for us to approach and ask communities to watch the film and support our goals,” says Shazia Jameel, one of the filmmakers and the members of the LGC.

“The film seems to have gained the attention of thousands of people,” Jameel says. “We have been receiving messages and support from different corners of the country,” she adds, saying supporters of her organisation have sent encouraging messages from all over the world.

The documentary, titled “Environment on the Frontline’, highlights hazards of using plastic and its impact on the environment. It also shows young girls of Lyari distributing handmade bags among locals and asking the masses to avoid using plastic bags.

The LGC launched the Say No To Plastic Bags campaign in August 2019. “The girls have distributed roughly 11,000 handmade bags. We have to distribute 4,000 more in the coming days,” reveals Urooj Bisma, another member of the LGC.

The film also shows young girls cycling in different busy neighbourhoods and on roads of the city. “We need a pollution-free Karachi and Pakistan,” urges Bisma Soomro. She and other team members have visited different to boost their environmental movement.

Around 60 girls cyclists regularly go for a ride on Sunday and over 150 girls have learnt cycling since 2017 when LGC launched the activity.

*With additional reporting by Sameer Mandhro

Lyari residents take to the streets