Consumers queue up for hours to get 2kg of sugar 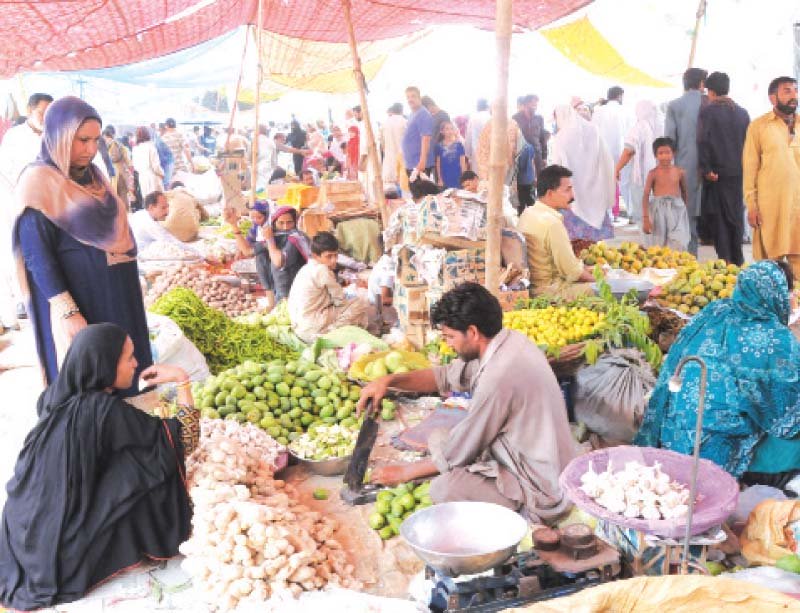 As profiteers increased the prices of essential commodities, Punjab government's Ramazan Bazaars could not provide relief to the people on Thursday as the stalls ran out of supplies within a couple of hours.

The price of sugar in the city's markets rose to Rs110 per kg. The rates of all commodities, including potatos, onion, tomatos, green chilli's, and poultry went up. Despite all its claims, the government failed to enforce the official prices and the shopkeepers started charging exorbitant rates for essential commodities with the start of the holy month.

The profiteers also raised the prices of flour, pulses, fruits and vegetables along with other food items.

The Punjab government has given a Ramazan package of Rs5.5 billion to provide relief to the people during the month. Under the package, as many as 313 Ramazan Bazaars have been set up across the province for providing essential items at subsidised prices to the people.

All vegetables are 25 percent cheaper in the special bazaars. The price of ghee has been reduced by Rs10 per kg and eggs Rs5 per dozen.

Punjab government claims that food items are being sold at three years old rates. However, due to insufficient supply fruits and vegetables were not available in the Ramazan Bazaars in the afternoon.

Consumers formed long queues at the outlets to buy subsidised sugar at Rs65 per kg as the price in the open market rose to Rs110.

They protested that after standing in queues for hours, they got two kilogrammes of sugar. A customer said each buyer should be provided at least 5kg of sugar.

Talking to The Express Tribune, a senior citizen, Mohammad Akram, said, "We stood in the queue for three hours and now we have received 2kgs of sugar."

He also complained about the quality of packing and said there should be a special counter for the elderly and each buyer should be given 5kg of sugar.

Mehwish, a buyer visiting a special bazaar, said the prices of vegetables and fruits were low but their quality was poor. If you complain to the shopkeepers, they say that they would sell the goods that they had received.

According to Punjab government sources, about 1.52 million bags of 10kg of flour have been supplied to Ramazan Bazaars across the province so far. Out of 10.22 million kg of sugar taken from the mills, over 1.15 million kg has been sold.

As many as 1,201 price control magistrates are monitoring the bazaars.

However, despite all the measures, the administration has failed to ensure the sale of goods at the official prices. According to the official rate list, the price of potatoes is Rs48 per kg, in the Ramazan Bazaar it is being sold for Rs36, while in the open market the price is Rs60. Similarly, the official price of tomatoes is Rs 65 per kg and subsidised price for the special bazaars Rs49 per kg, while the rate in the city markets remained Rs100 per kg.

Gram flour was sold for Rs160 per kg, despite the official rate of Rs145 and subsidised price of Rs109 per kg.

Similarly, the official price of dates is Rs225 and that in the Ramazan Bazaars Rs169.

The price of poultry meat went up by Rs6 per kg after declining in the past few days.

Talking to The Express Tribune, Punjab Chief Secretary Jawad Rafique Malik said there was a big difference in the prices of sugar in the open market and Ramazan Bazaars, so there was a rush on the stalls.

"Last year, we bought 14,000 tonnes of sugar for Ramazan Bazaars and now we have 30,000 tonnes. There is plenty of sugar available," he said.

"We are improving the arrangements but every buyer will get only 2kg of sugar," he added.