Eid to be celebrated on same day in country 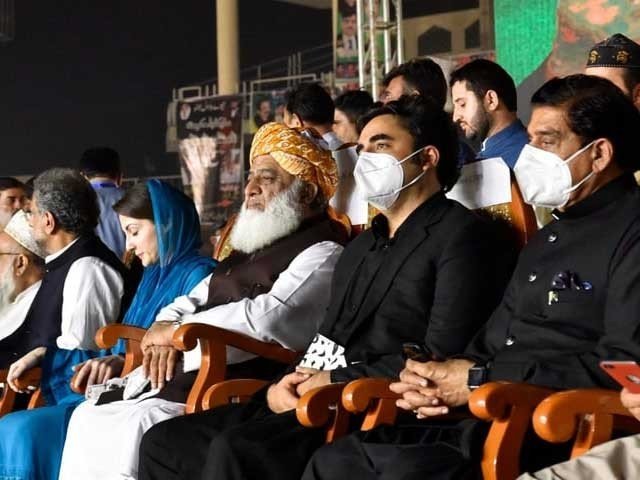 The opposition parties which had come together under the banner of the Pakistan Democratic Movement (PDM) to oust the PTI government — especially the PML-N and the PPP — are now engaged in an internal fight over petty issues, many think.

The PDM insiders, however, say that the issues they are fighting about may be petty but their apparent rift has more to it than meets the eye.

Two assumptions were formed when the two biggest opposition parties decided to join forces along with nine others in September last year to dislodge the “selected PTI government”: Some had claimed that 90s’ politics is over and that young leaders of the PPP and the PML-N — Bilawal Bhutto Zardari and Maryam Nawaz — have now a new approach.

However, six months into the alliance, the two parties are trading barbs, reverting to 90-style politics with the so-called new approach of their new leadership vanishing into thin air.

“The PDM has suffered a miscarriage within six months or rather it has given birth to a stillborn child,” a PML-N leader said on condition of anonymity.“The political class of the 90s managed to maintain relationships longer than the younger leaders,” he quipped.

He admitted that it was the first time in his long political career that the opposition parties had been divided into two camps and that too after they came out to oust the government.“Actually things have devolved to a political civil war of sorts,” the PML-N stalwart said.

Talking with reference to the tussle between the PML-N and the PPP over the office of Senate leader of the opposition, the lawmaker sided with the PPP.

He said PML-N’ leader Ishaq Dar has admitted that PPP Co-chairman Asif Ali Zardari had called him asking to convince PML-N supreme leader Nawaz Sharif to give the office to PPP’s Yusuf Raza Gilani but he turned down the request on his own, say- ing a decision in this regard had already been made.

“Dar Sahib should have communicated Zardari Sahib’s message to Mian [Nawaz Sharif] Sahib instead of blocking the channel of communication,” he said.

He, however, did not fully blame the PML-N and recalled what had happened in April 1993, during the first PML-N government led by Nawaz Sharif

Back then, he said, Nawaz Sharif had made it clear that as a prime minister he would not take dictation from the establishment, taking the line that winning in the eyes of people mattered more.

“Soon, the PML-N government was sent packing because the PPP fully supported the establishment back then and Asif Ali Zardari was sworn in, in the next cabinet by president Ghulam Ishaq Khan [who had terminated Sharif ’s government],” he added.

Despite Dar’s admission, he said, Zardari has once again “outsmarted” Sharif because he believes that “rules inside the ring are different”.

The leader admitted that the first cracks in the alliance emerged when Nawaz Sharif in Gujranwala rally named the top army brass. He said PPP Chairman Bilawal reacted to the speech by stating that the PDM was not a person-specific movement but was against the establishment’s role in politics.

He said the show was presented as a do-or-die rally but it did not come up to anyone’s expectation especially when it was compared with the funeral of TLP chief Maulana Khadim Hussain Rizvi that took place weeks back in the same city.

“This made one think that either there was some issue with the PDM’s narrative or its policy was wrong and needed a review. People were also confused if the PDM was against the system or if it wanted to be a part of the system because sometimes it said it is after those who had brought the PTI into power while, on other occasions, it said it was after the prime minister and gave him ultimatums.”

The Gilgit-Baltistan elections, he said, should have been fought under the PDM’s banner instead of in individual capacities. “It was a test case and the defeat in it demoralized the alliance before it won by-elections and Gillani defeated ex-finance minister Abdul Hafeez Shaikh in Senate elections.”

“Mixed signals confused people; there should have been a clear cut policy instead of telling people Alif Laila [The Thousand and One Nights] over and over again,” he said.

According to the lawmaker, lack of clarity and mixed signals gave people the impression that the opposition was not on the same page while the government and the establishment stood united.

Another leader of PML-N, however, said the PDM’s objective was clear from day one but there was disagreement on the strategy, adding the PML-N and the PPP were at odds over the question of resigning from the legislature right from the start.

He, however, ruled out that the split in the PDM would give any edge to the ruling party “as things are still difficult for them and they are making more mistakes almost every day”.

For him, the biggest triumph for the PDM came when Gilani won the coveted Senate seat from Islamabad and there emerged an impression that the establishment had distanced itself from the PTI.

Commenting on Zardari’s March 16 speech in which the PPP leader had asked PML-N supreme leader Nawaz Sharif to return to Pakistan, he said, “Zardari is not a kid. His speech was aimed at embarrassing the PML-N and his real intention was not to seek Nawaz’s return.”

“We felt that Zardari made the speech at someone else’s behest because he demanded Mian Sahib’s return so casually. Interestingly, news channels were running the tickers of this statement while he was making the speech.”

He said Nawaz Sharif’s re-turn to Pakistan is a non-negotiable issue at the moment. It must be remembered that Mian Sahib did not hesitate to return to the country in 2017 after being convicted by an ac- countability court,” he added.

He said the PPP was initially “uneasy” with the “extreme narrative” adopted by the PML-N but it stood by the PDM platform. There were not many in the PML-N, he added, who openly criticized generals but “it is the PML-N which made it easy for every- one to name and shame.”

“There was a time when no one could openly criticize the Taliban [insurgents] or [MQM founder] Altaf Hussain but then it became easy. Similarly, it was difficult to even call out the establishment but now it has become easy,” he said.

He said the PPP doesn’t have the guts to take the establishment head-on and that is why it has presented itself as an alternative to the PTI. He suggested that the protests and public mobilization have not entirely gone in vain as the PDM parties’ struggle has led to claiming some territorial gain in the political sphere.

Discussing the disintegration of the PDM with The Express Tribune, some PPP leaders said the PPP did not criticize the PML-N when there was suddenly an unopposed walkover in the Punjab provincial assembly for the PML-N candidates during the Senate elections.

A PPP lawmaker declared the PDM’s tendency to im- pose decisions one of the reasons for its failure. He said the PDM was an alliance in which all parties needed to be treated on equal terms.

The lawmaker revealed that the establishment is separately in touch with the PPP, the PML-N and the JUI-F. He did not hesitate to admit that a deal between the PML-N and establishment could not be finalized because of former PM Nawaz Sharif and his daughter Maryam Nawaz.

He admitted that the PPP felt uneasy when the PML-N started criticizing army officials by name.

“However, what made the PPP rethink its strategy were the Senate elections in Punjab in which the PML-N, the PML-Q and the PTI managed to get their lawmakers elected unopposed.

“This was something really unusual. Later, Zardari Sahib held a discussion with PML-Q’s Chaudhrys and the PPP assessed as to how much it could trust the PML-N,” he said. The lawmaker admitted that the PPP has presented itself to the establishment as an alternate to the PTI.

The lawmaker said Nawaz Sharif is abroad; JUI-F chief Maulana Fazlur Rehman and Maryam are not yet elected and PML-N President Shehbaz Sharif is “comfortable” in jail and in this situation it is only the PPP which has a lot at stake if it decides to confront with the establishment.

In the 90s, he said, there were only two mainstream parties but now there are three and that even makes it difficult for the establishment to choose one.

On differences over resigning from assemblies, he said, the experiment of bringing PTI in power did not go well and resigning en mass would only make the ruling party emerge stronger in and outside the parliament. Also, he questioned, what's the point of resigning from the assemblies and then contesting by-elections on the same seats. “If PTI wins by-elections, there will be no 18th amendment,” he said.

For this reason, he said, Zardari Sahib repeatedly asked PDM parties to either give a solid plan or allow him to present one but in vain. Naming top army brass or the issue of the leader of the opposition in Senate are important issues but, first, there should be clarity about the overall strategy. Right now, he said, establishment and PPP are in favour of a change in Punjab but PML-N is opposing it.

In G-B elections, it was clear that PDM is not an electoral alliance and PPP did not see any benefit in Punjab or KP in the long run.

Hinting that PPP was busy reorganizing itself in Punjab, he claimed that several PTI lawmakers were in contact with PPP but they are in favour of contesting on PPP ticket the next time instead of leaving PTI right now.

He put the number of lawmakers at 45, claiming Jahangir Tareen was among those. About PDM, the leader said that the PPP leadership felt that PML-N and JUIF were supporting each other and often it seemed that their members had already discussed the issue before presenting it before PDM.

To the question if public perception mattered, the lawmaker said that people forget too soon, asking if they remember Sharifs’ agreement with Musharraf before going abroad; do they remember how Nawaz left for London in 2019?

“No,” he said, adding the slate is once again clean. “Noon takes advantage whenever it feels like it,” he said. He agreed with the example given by PML-N lawmaker that the rules inside the ring are different than the outside and Zardari Sahib has “outsmarted” everyone just like he did in the past – in 1993 as well. He, however, said that things can change if Sharif once again decides to come back.