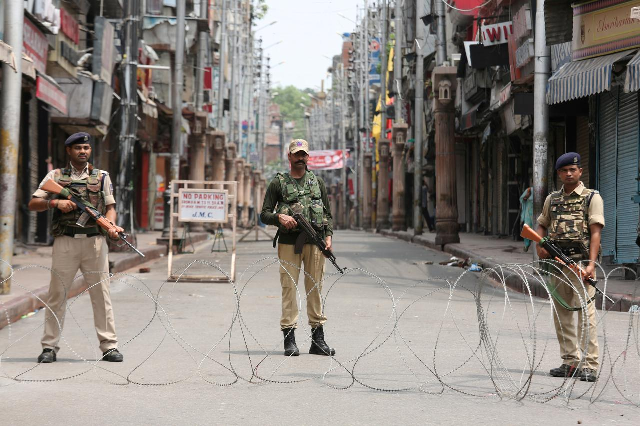 Despite Covid-19 wrecking havoc across the country, India continued to clamp down on civil liberties and restrictions on communications services in Indian Illegally Occupied Jammu and Kashmir (IIOJK), a new report by the Amnesty International revealed on Wednesday.

"Political leaders such as Farooq Abdullah, Omar Abdullah and Mehbooba Mufti, who were administratively detained in 2019, were released in 2020. However, the union government continued to silence those who demanded accountability and imposed a harsh media blackout," the report added.

On August 5, 2019, the Modi-led Bharatiya Janata Party (BJP) stripped Kashmiris of the special autonomy they had for seven decades through a rushed presidential order. By repealing Article 370 of the constitution, people from the rest of India now have the right to acquire property in the occupied territory and settle there permanently.

It said that at least 18 journalists in IIOJK were physically attacked by the police or summoned to police stations. "Dissent was further suppressed when a new media policy was introduced by the IIOJK government to create a sustained narrative on the functioning of the government in media' by checking 'anti-national activities."

The human rights group said that India's National Investigation Agency (NIA) also raided offices and residences of civil society activists including Khurram Parvez and three of his associates, and Parveena Ahanger, who had reported extensively on human rights abuses in IIOJK.

The report said that during the nationwide lockdown imposed after the Covid-19 outbreak, more than 50 journalists were arrested or charged under emergency laws for spreading “misinformation” or “fake news”.

'Over 160 farmers died after farming laws passed by Indian parliament'

The Amnesty International said that more than 160 farmers died after three laws on farming were passed by the Indian parliament in August with minimal consultation.

"The causes of death included suicides, as well as heart attacks and road accidents during protests."

It said that in November, as the farmers marched towards Delhi to protest against the laws, the Delhi police indiscriminately used water cannons and fired tear gas shells, injuring protesters.

'US human rights deteriorated in 2020'

The report stated that the situation of human rights in the United States deteriorated further in 2020 as the Covid-19 pandemic and the presidency of Donald Trump exacerbated pre-existing rights concerns.

The report lists 15 human rights areas of concern in the US, including unlawful killings of civilians, LGBTQ rights and the right to peaceful assembly.

'Russia may be slowly killing Navalny'

Alexei Navalny, the prominent opponent of Russian President Vladimir Putin, is incarcerated in conditions that amount to torture and may slowly be killing him, human rights group said.

The Amnesty International said that Navalny, who last year was poisoned with a military-grade nerve agent, was now being subjected to sleep deprivation and did not have access to a doctor he could trust in jail.

The rights watchdog said that conflicts between states and armed groups are either continuing or even escalating in most parts of Sub-Sahara Africa and the situation has made the Covid-19 onslaught even worse.

“Conflicts between states and armed groups and attacks on civilians have continued or escalated in most parts of Sub-Saharan Africa. In Southern Africa, the long-simmering violent tensions in Mozambique’s Cabo Delgado province intensified into full-blown armed conflict,” the report said. “The Horn of Africa region saw an outbreak of conflict in Ethiopia’s Tigray region.”

The report added that Covid-19 worsened the already precarious situation of refugees, asylum seekers and migrants in many countries, trapping some in squalid camps, cutting off vital supplies, or precipitating border controls that left many stranded.

(With additional input from Reuters and Anadolu Agency)