For this, an environment of trust, devoid of terrorism and hostility, is imperative, says Indian premier

"For this, an environment of trust, devoid of terrorism and hostility, is imperative," Modi said in a letter written to his Pakistani counterpart. The letter was handed over to the Foreign Office by the Indian High Commission.

The statement suggests that the Indian government has attached preconditions to any normalisation of ties after recent developments indicated a possible thaw in the ties between the two neighbours.

"On the occasion of the National Day of Pakistan, I extend my greetings to the people of Pakistan," he wrote.

"As a neighboring country, India desires cordial relationship with the people of Pakistan. For this, an environment of trust, devoid of terrorism and hostility, is imperative," he maintained.

"Excellency, at this difficult time for humanity, I would like to convey my best wishes to you and the people of Pakistan for dealing with the challenges of the Covid-19 pandemic." 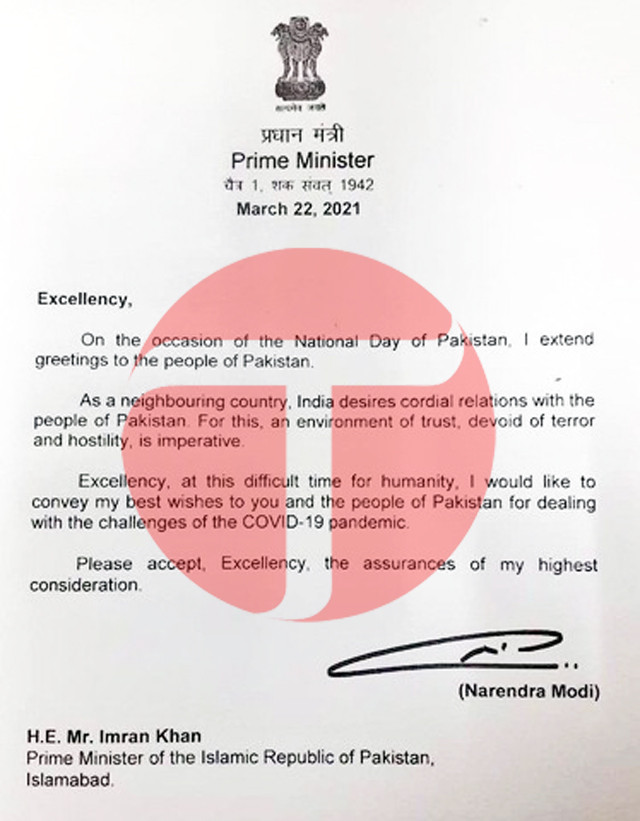 Earlier in the day, Pakistan's acting high commissioner to New Delhi had said Islamabad wants friendly relations with all its neighbours including India, in yet another sign of thawing of relationship. He added that peace was inevitable in the South Asia region.

"For the larger interest of the region peace within South Asia is inevitable," said Pakistani Charge d’ Affairs Aftab Hasan Khan while addressing the event in New Delhi to mark the Pakistan Day.

According to the statement issued by the Pakistani mission in New Delhi, khan said that Pakistan wants to have friendly relations with all countries including India.

"To achieve peace between Pakistan and India both countries shall resolve all outstanding issues including IIOJK through dialogue," he stressed.

His statement appears to suggest that both countries are trying to lower the rhetoric in order to create a conducive environment for further engagement.

The relations between the two neighbours have been on the mend since the two countries in an unexpected move announced to restore the 2003 ceasefire on February 25.

Since then both sides have been visibly trying to send positive signals. While the Pakistani leadership is giving conciliatory statements, India also opted to avoid giving hostile statements against Islamabad.

Another sign the two countries are willing to re-engage is the holding of the meeting of permanent Indus Commission in New Delhi. The two-day meeting kicked off in New Delhi on Tuesday and was taking place after a gap of two and half years.

There are reports that the UAE is trying to mediate between the two countries.

Meanwhile, Charge d’ Affairs Aftab Hasan Khan in his remarks extended warm felicitations on Pakistan National Day and lauded the zeal with which the broader Pakistan High Commission family participated in the event.

The Charge d’ Affaires said that on 23rd March 1940, Muslims of India under the dynamic leadership of Quaid-e-Azam Muhammad Ali Jinnah made a resolve to make a separate home land for themselves.

He said every year on this day we renew our resolve, to make Pakistan a modern Islamic and democratic welfare state in the light of the guiding principles of Quaid Muhamamd Ali Jinnah.

In the end, he stressed the importance of each successive generation to contribute its own part with honesty, hard work and dedication toward the realization of the Quaid’s vision.

Students of the Pakistan High Commission School presented national songs and tableau on the occasion. Erum Aftab gave away prizes and gifts to the teachers and students of the school.

‘Jinnah-Gandhi trophy didn't take place due to extremists like Modi’