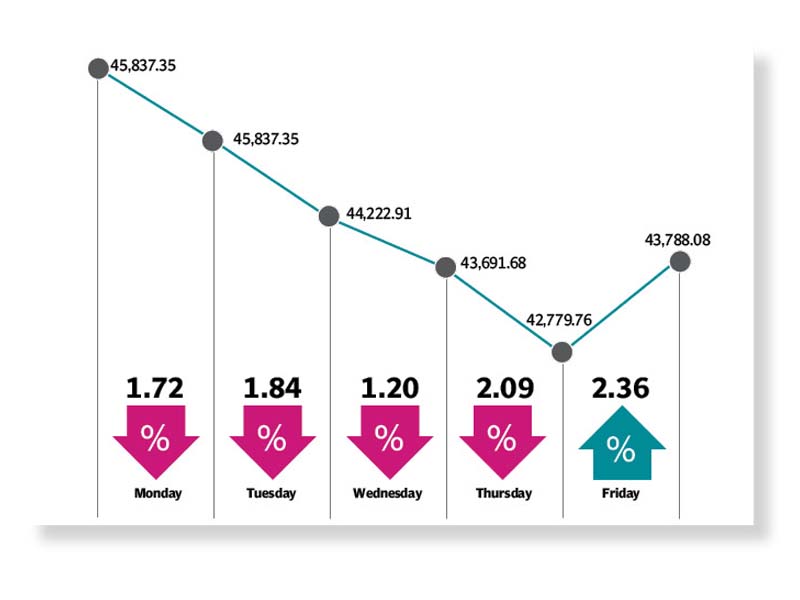 The Pakistan stock market saw a massive sell-off in the outgoing week as the benchmark KSE-100 index nosedived 2,049 points, or 4.5%, in the worst weekly rout in the past one year.

It was the biggest weekly decline since the week ended March 27, 2020 when the market plunged 8.34%.

The KSE-100 index settled at 43,788.08 at the end of trading week on Friday, March 12, 2021, following a bear rampage that dented investor sentiment. The sell-off continued for four successive sessions as panic and uncertainty reigned.

Mainly the growing fear of a third wave of Covid-19, political uncertainty amid the Senate chairman election and Pakistan’s efforts to meet pending conditions of the International Monetary Fund (IMF) loan programme took their toll on the bourse, which lost significant ground.

At the beginning of the week, trading kicked off with a dip as investors paid no heed to the news of Prime Minister Imran Khan winning the vote of confidence in the National Assembly, and offloaded their stockholdings.

In addition, the absence of positive triggers that could provide direction to the market sparked volatility, which continued till the end of the week.

Bears maintained their grip on the stock market on Tuesday, with inflation concerns emerging in the wake of soaring commodity prices and rising yields of government papers, which shattered investor confidence.

Things fared no better in the next two sessions and the index lost over 3,000 points in the first four days of the week under review.

News about expected withdrawal of tax relief by the government, hike in electricity tariff by Rs0.89 per unit announced by the National Electric Power Regulatory Authority, increase in coronavirus cases and a gradual rise in crude oil prices in the international market played the role of catalysts in the market meltdown.

A robust recovery was, however, on the cards after the constant battering. As expected, the market on Friday seemed to shrug off the prevailing political uncertainty as investors were optimistic about the Senate chairman election.

According to the election result, announced after the trading session, the incumbent Senate Chairman, Sadiq Sanjrani, was re-elected to the chair of the upper house, defeating Pakistan Democratic Movement (PDM) candidate Yousuf Raza Gilani. In addition to that, the flow of workers’ remittances into Pakistan remained strong above $2 billion for the ninth successive month in February 2021. According to data released by the State Bank of Pakistan, the country received remittances worth $2.26 billion in February, which was 24% higher than $1.82 billion in the same month of previous year.

“With the government’s candidate successfully retaining his position as the Senate chairman, we view this as a major political sigh of relief for the ruling party,” stated Arif Habib Limited in its report.

“We expect this to create renewed confidence and stability in the political climate, which should help the bourse recover.”

Foreigners turned buyers during the week as they bought shares worth $3.6 million compared to net selling of $10.7 million in the previous week.

Buying was witnessed in commercial banks ($2.3 million) and food and personal care products ($0.4 million). On the domestic front, major selling was reported by mutual funds ($9.1 million) and insurance companies ($5.6 million).

Among other major news of the week were downward revision in FBR’s tax collection target by Rs246 billion for FY21, start of production by Lucky Cement’s Iraq facility, announcement by Ghani Global about the manufacturing of sophisticated technology, planned IPO of Adamjee Life and directives to banks to digitise payments and financial services.