Is PTI above the law, ask ministers 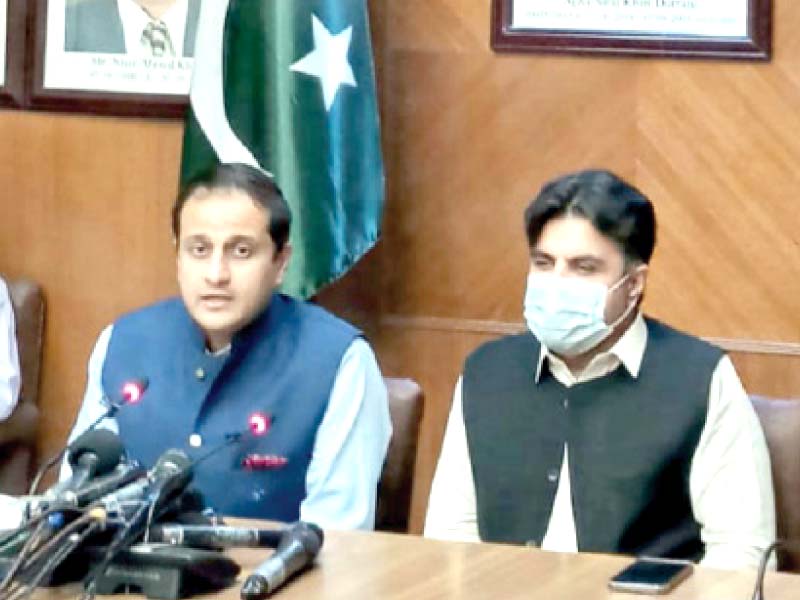 Interfering in the election process is a crime for the common man, said Sindh government spokesperson Murtaza Wahab on Monday. “So, is it not a law for the Pakistan Tehreek-e-Insaf?” he asked.

Addressing a press conference on the day, Wahab censured the PTI, which leads the federal government, for its reaction to Opposition Leader in Sindh Assembly Haleem Adil Shaikh’s arrest following violence during by-polls in Malir’s PS-88.

“We have tried so many times to avoid answering them,” said Wahab, who was flanked by Sindh Information and Local Government Minister Nasir Hussain Shah. “The PTI’s attitude towards government officials is threatening.”

Referring to the Election Commission of Pakistan’s letter to the Malir SSP, Wahab said Haleem was roaming about in the constituency with a group of armed persons.

According to Wahab, Federal Minister Asad Umar had first flouted the by-election rules of the ECP by inaugurating the polling camp in Malir and then Haleem violated the rules on polling day.

Wahab held up pictures of PTI’s armed men purportedly taken on election day and reminded that Haleem was expelled from the constituency on the ECP’s directives.

Had the police been biased they would not have permitted Haleem to have visitors, he said.

With regards to the snake, the spokesperson said that members of the provincial cabinet had condemned the incident on the day it came to light. “I am surprised that the four-foot snake was immediately killed by Haleem. It is also important to investigate whether the snake came itself or it was brought [in],” he added, however.

The spokesperson of the Pakistan Peoples Party-led provincial government categorically denied allegations that Haleem was subjected to violence in prison. Some people had shouted slogans, said Wahab, refuting claims of Haleem being tortured.

Responding to Sindh Governor Imran Ismail’s tirade against the Sindh IGP, Wahab censured the federal government and said that a person holding the office of the governor should not threaten the police.

He appealed to the PTI leaders to let the law take its course and not interfere with the police or court’s proceedings. In response to a question, the spokesperson said that province’s consultation is necessary for both the removal and the appointment of the IGP.

At a press conference held earlier, Ismail had said that while there was no likelihood of governor’s rule being imposed in the province, he has written to the premier regarding lawlessness in the province.

“Sindh IGP Mushtaq Ahmed Mahar has failed to perform his duties and is a biased officer,” said Ismail, adding that he has requested the premier to change the IGP.

The governor accused the provincial police department of taking illegal action against members and workers of opposition parties in Sindh. “The officers must remember they are the servants of the state not of any political party,” said Ismail, accusing Mahar of discrimination.

Ismail alleged that the Sindh Police was controlling the city in a similar fashion as the founder of the Muttahida Qaumi Movement - like “goons”. He warned the Sindh Police to amend its ways or the federal government would fulfill its duties.