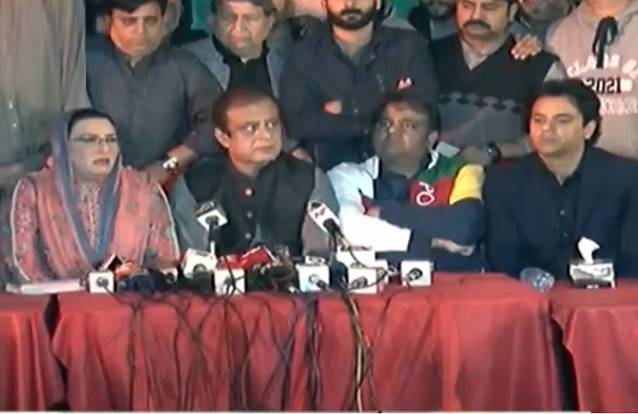 Once again claiming victory in the by-election at the NA-75 Daska constituency of Sialkot, the ruling PTI on Sunday urged the polls supervisory body – the Election Commission of Pakistan (ECP) – to announce the result of the by-polls that were marred by violence.

“PTI candidate Ali Asjad Malhi has won the by-election at NA-75 Daska and the ECP should announce the results,” Minister for Information Shibli Faraz said while addressing a press conference at Daska.

The ECP on Saturday said results of 20 polling stations in the Sialkot-VI constituency were "feared compromised” and restrained authorities from announcing unofficial results as both the ruling party and PML-N claimed victory in the constituency.

The minister said the difference between the votes polled for the PTI and the PML-N in Wazirabad had narrowed from 33,000 to only 4,000. “The lead of the PML-N [at Daska constituency] was 40,000 in 2018 but they are now defeated in Daska,” he added.

At least two people were killed and a dozen injured in a firing incident at a polling station on Friday during Daska by-polls. One of the victims was reportedly a member of the ruling PTI while the other belonged to the PML-N.

Taking with reference to the incident, Shibli said the PML-N always resorts to politics of intimidation, hooliganism and bribery. “The PML-N leadership repeated that practice by sending Rana Sanaullah, Javed Latif and others, who are specialists in vandalism, to create law and order situation in Daska,” he said.

He said now the PML-N leaders are shedding crocodile tears over the killing of the two workers.

“This incident has refreshed the memories of the 2014 Model Town massacre in which innocent women and children were brutally killed.

“The killing of workers on the polling day took place under the patronage of Rana Sanaullah, the man responsible for the Model Town killings. PML-N leaders during their election campaign in Daska said they would win the elections with the power of guns,” he added.

Ali Asjad Malhi strongly denied the claim that he was defeated in his own village and said his family had never lost elections from their village since 1947.

Condemning the PML-N’s celebrations, he said the PTI did not celebrate the win due to the Friday tragedy. “I will share the names of the murders with the media,” he added.

Minister for Science Fawad Chaudhry said his ministry has developed a technology for electronic voting which would be transferred to the ECP soon.

Chaudhry said the government has also presented an election reform bill for adopting electronic voting system in elections to end malpractices. The minister said the opposition complained about rigging in the by-polls only in the constituency where the PTI candidate won.

The PTI leaders later also visited the residence of the PTI worker killed on Friday and condoled with the family. The ministers also inquired about the health of the injured workers.  In a tweet, Shibli said heart breaking scenes were witnessed during the meeting with the family of slain PTI worker.

Shibli, in today’s presser, said PML-N had resorted to such tactics after failure of their supreme leader Nawaz Sharif’s narrative.

“PML-N sent Rana Sanaullah, Mian Javed Latif and others in Daska for rigging and create unrest in the area,” he said, adding that Daska firing incident was reminiscent of Model Town incident that took place during PML-N’s last tenure in Punjab.

He said Prime Minister Imran Khan has called for open ballot in Senate election because he wanted to make election process transparent and credible in the country.

Speaking on the occasion, Science and Technology Minister Fawad Chaudhry said PTI candidate Ali Asjad Malhi has clearly won the Daska by-boll and they will celebrate the election victory after the official announcement.

He said PTI did not hurl rigging allegations after it was defeated in Karachi, Nowshera and Wazirabad by-election while asking PML-N to accept its defeat.

Fawad said there is no point of holding re-election in Daska but added that his party is obliged to accept ECP’s decision in this connection.

“ECP should immediately announce the results,” he demanded.

She said their candidate had consecutively been winning elections in the same constituency since 2013.

Firdous said PTI has secured the victory by a clear margin and urged the ECP to announce the result ‘immediately’.

Earlier on Saturday, Shibli – the chief government spokesperson – had admitted that there were internal rifts in the ruling party due to which it suffered a setback in Friday’s by-elections.

According to party insiders, the ruling party in reality is in a state of shock and searching for answers for an unexpected defeat notwithstanding the congratulatory messages by PTI leaders claiming victory in the controversial by-polls in Daska.

Shibli Faraz admitted that “internal rifts between two brothers” damaged the party in Nowshera by-election but PTI’s vote bank has not shrunk, adding that that is why Khyber-Pakhtunkhwa Irrigation Minister Liaquat Khattak — the brother of Defence Minister Pervaiz Khattak — was removed from his post for allegedly supporting the victorious candidate belonging to the Pakistan Muslim League-Nawaz.