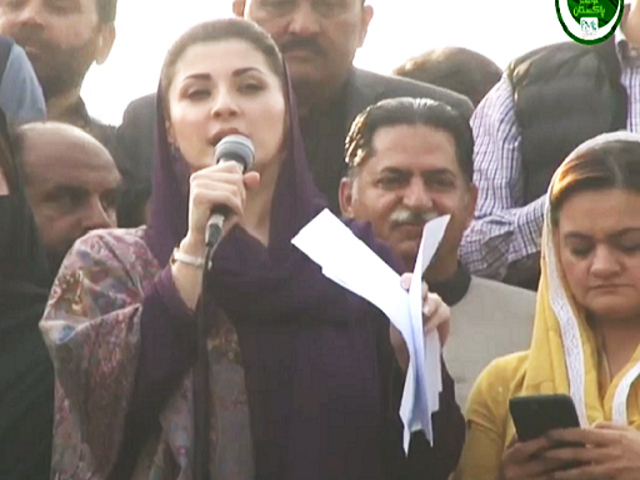 Maryam while addressing the public gathering in Daska. SCREENGRAB
DASKA:

Pakistan Muslim League-Nawaz (PML-N) Vice President Maryam Nawaz on Sunday demanded the Election Commission of Pakistan (ECP) to hold re-election in Sialkot’s NA-75 constituency, saying that the results of Friday’s by-poll were manipulated at the behest of ruling PTI.

Maryam alleged that the results of 20 polling stations were changed after their “staff members were taken hostage”.

“It is incumbent upon the ECP to order re-election on all polling stations of [NA-75 constituency] and expose and register case against those found involved in rigging,” she said while addressing a public gathering in Daska.

Maryam said the ruling PTI was defeated in NA-75 by-polls even after resorting to every tactic to manipulate the polls.

"When the PTI noticed that the PML-N supporters had queued outside the polling stations in large numbers, they closed the gates of the stations," Maryam said.

“But when they realised they couldn’t defeat the PML-N by shutting the polling stations’ doors on its voters, they opened fire to have the voting process slowed down,” the PML-N leader claimed.

"Nawaz Sharif has defeated you in your own stronghold," she added.

The PML-N leader said that the staff of the Election Commission were whisked away and couldn't be found until morning.

"The ruling party has no narrative and, even if there was one, it has failed."

Maryam told the ECP that it has a huge responsibility on its shoulders as it represents the voice of the people. "We ask you to not only expose the thieves but also ensure that they are arrested and booked."

"The government will be held accountable for all of its suppression and tyranny," the PML-N leader maintained.

"We also demand a re-election in the affected areas," she said, adding, "But we will accept a re-election only after it has been ensured that there will be no vote-theft in the polls."

Earlier today, while talking to media persons in Jati Umra, the PML-N leader said the government stands exposed following the by-polls, adding that the rulers now know their true worth.

"The people of Daska fought the war of democracy and honored their votes," Maryam said, adding that "people have rejected the flour and sugar thieves and now they should know their worth among the masses."

The PML-N leader further said that the rulers stand exposed in the by-polls. She said the people now know how their votes were stolen in the 2018 general elections, and how "Imran Khan was enforced" on them through manipulation of the polling process.

Maryam accused the PTI of resorting to firing during the elections and taking two lives.She said, "When they didn't gain anything, they abducted the presiding officer who had refused to sell his loyalties."

"The results of 20 polling stations were changed but the government failed despite resorting to all such tactics," the PML-N VP stated.

She maintained that the people of all four provinces have clearly rejected the rulers, saying the incumbent government was defeated despite all its "state terrorism".

"The PTI will soon shatter as it has no future," she maintained.