The claim is false as his family confirmed that no headway has been made in finding the climbers who have been missing for over a week now. Contact with Sadpara, along with two other foreign climbers, Iceland's John Snorri and Chile's Juan Pablo Mohr, was lost as they tried to climb K2 on February 5.

The world's second highest peak at 8,611m (28,251 feet) and also reputedly the deadliest, is notoriously difficult to climb in the winter season. Pakistan military has used a high-altitude C-130 aircraft and infrared technology to spot possible shelters on the peak, but to no avail so far.

On February 15, a UAE-based media organisation Soch Media tweeted a picture of Sadpara with a caption:"Muhammad Ali Sadpara has been rescued alive by the Pakistan Army after 216 hours." 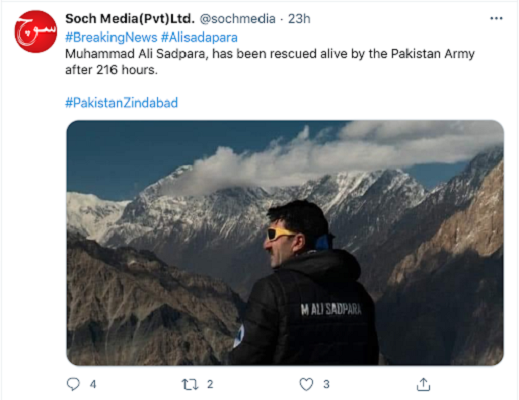 Gurualpha, a local news outlet, also published an article claiming that Sadpara had been saved by Pakistan Army.

A YouTube video posted by New Global Facts, which has been viewed over 88,000 times, claimed that the mountaineer had miraculously been found.

A similar video posted on the video sharing platforn by Historical Facts also made the same claim outlining details of the operation to find him..

The alpinist's official Twitter account came out and dispelled all these assertions on social media. His management team said that the :"fake news" had caused immense "distress to everyone".

They also reiterated the need to avoid making such baseless claims.