WHO, UNICEF-backed drive to continue till next Saturday 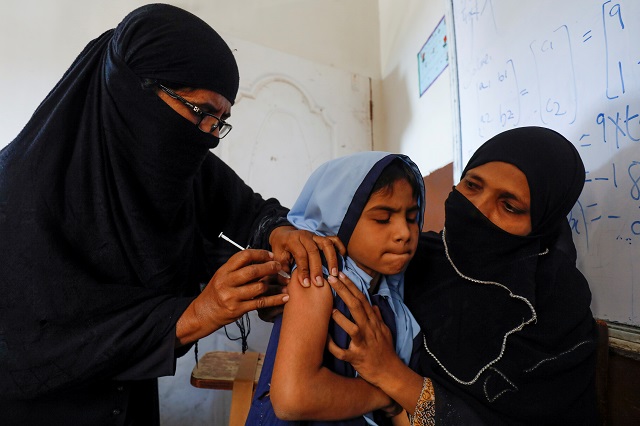 Over a million children have been vaccinated against typhoid till Saturday, the fifth day of the campaign in Rawalpindi district, officials said on Sunday.

The anti-typhoid campaign in the district would restart from Monday (today) after Sunday break, they said adding that the drive initiated on February 1 with the collaboration of the World Health Organisation (WHO) and UNICEF would continue without breaks until next Saturday.

During the immunisation drive, children aged from nine months to 15 years would be vaccinated against typhoid in different districts of Punjab.

Punjab Health Services Director Dr Bahseer Ahmed said that the target for the fifth day of the campaign was 995,635 children. Some 105,101 children were vaccinated during the campaign, he said adding the success rate remained almost 100 per cent.

Ahmed appreciated immunisation teams for meeting the target and said that the success of the campaign reflected people’s interest.

The health services directors (EPI Punjab) said the anti-typhoid vaccines would be included in the EPI programme from March, 2021 under which every child at the age of nine months would be vaccinated. The anti-typhoid vaccination campaign will last for 15 days while public awareness drive is also being carried out in collaboration with UNICEF along with the campaign.

Sources told The Express Tribune that in 63 per cent of the cases of typhoid in the country, 70 per cent of the deaths were of children under the age of 15. Due to this, the Ministry of Health has decided to include typhoid vaccine in the official vaccination of children.

Rawalpindi Deputy Commissioner (DC) Anwarul Haq appealed to the people to play their role in making immunisation drives against polio and typhoid successful.

The official was addressing a meeting on Sunday in which Additional Deputy Commissioner (ADC) Headquarters Muhammad Abdullah was also present.

District Registering Authority Private Schools (DPAPS) Member Irfan Muzaffar Kiyani assured Rawalpindi DC of full cooperation in this regard. He told that they were running a sensitisation campaign to create awareness among the parents and teachers.

He added that all resources would be utilised to make both campaigns successful. Kiyani appealed to private school owners to cooperate with the immunisation teams.