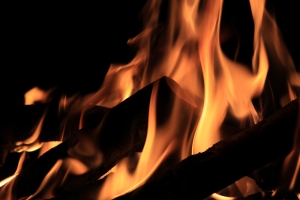 A fire broke out in a freight train wagon, stationed at Karachi City Station, on Friday afternoon, and soon spread to another one beside it.

When the fire department was informed of the incident, a fire tender from Bolton Market fire station was dispatched to the site.

According to fire department officials, they received information about the incident at 3.15pm and the fire tender was sent to the site at 3.18pm.

However, the fire tender couldn't find the way to reach the spot where the train was stationed, and hence, firefighters climbed a nearby bridge, from where they threw water on the wagons to put out the flames.

It took them an hour to extinguish the fire.

Sources in the railway department told The Express Tribune that as soon as the fire erupted, the flaming wagons were separated from the freight train.

They were moved to the washing line, where efforts were made to douse the fire.

The cause of the fire couldn't be determined till the filing of this report.