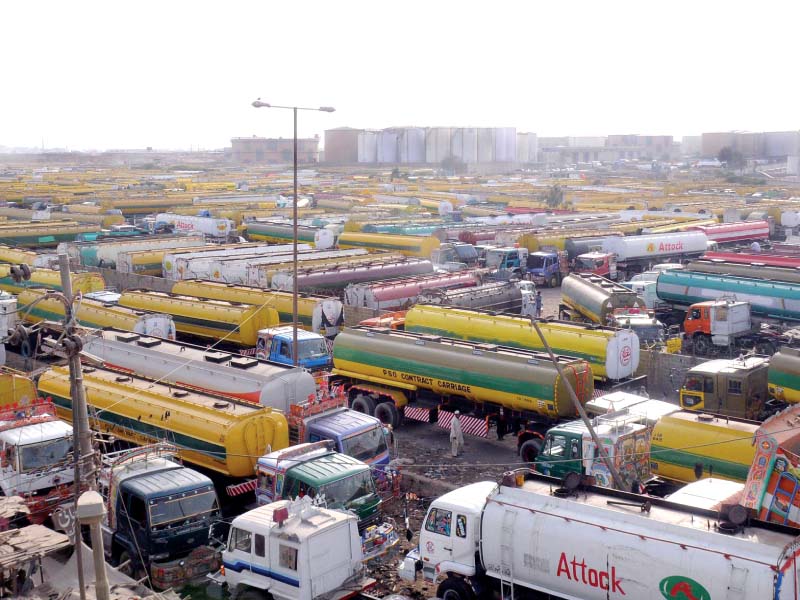 The Zulfikarabad Oil Tankers Terminal will be operational with effect from December 12. PHOTO: FILE
LAHORE:

Pakistan Customs has launched a crackdown against smuggled, substandard petroleum products being sold across the country, identifying and sealing 476 out of a total 2,224 petrol pumps so far.

In the nationwide raids, officials have seized more than 1.73 million litres of petrol and more than 1.87million litres of diesel, informed sources. The total value of the confiscated petroleum products is said to be Rs497.37 million, while the tally is susceptible to rise in the coming days.

According to sources, the Federal Board of Revenue earlier reported to Prime Minister Imran Khan that petroleum products worth more than $2 billion were being smuggled into Pakistan.

The illicit petroleum trade is causing a whopping loss of Rs150-240 billion to the national exchequer. Sources said that people are getting their hands on petrol that is Rs20 per litre cheaper in price.

The smuggled petrol is sneaked into southwestern province of Balochistan from Iran, following which it is transported via trucks, rickshaws, passenger buses and tankers to the other parts of the country.

Sources said that due to the slackened security measures at the border openings between Balochistan and Iran, smuggling of petroleum products is routinely carried out by an organised gang. Pakistan is fencing its border with Iran to mitigate the prevalent issues.

Chief Collector Customs Lahore Faiz Ahmed Chadhar said that according to an estimate, these smuggled petroleum products cause a dent of Rs100-150 billion annually in duties and taxes.

“As the government is focusing on road infrastructure in Balochistan, there is an imminent demand for anti-smuggling operations as well.”

The chief collector customs said that the problem is a double-edged sword as the government has to promote trade while putting a lid on illicit movement of goods.

“In a first, PM Imran Khan has taken the initiative to open 2,000 jobs for anti-smuggling measures.”

In addition to the Frontier Corps and other security personnel in Balochistan, customs officials would also be deployed, added Chadhar.

Speaking on the detrimental impact of these faulty products, the Customs official apprised that these smuggled petroleum products cause damage to the engines of vehicles.

Meanwhile during the raids, the customs officials identified 1,505 petrol pumps in Punjab that were selling smuggled products. The tally is 374 in Khyber Pakhtunkhwa, while Sindh has 345 petrol pumps selling defective petroleum products at cheaper rates.

At present, the owners of these petrol pumps are being given time to prove innocence, otherwise they will be sealed by the officials.

Officials have so far sealed 298 petrol pumps in Punjab, 108 in KP and 70 in Sindh, while Punjab Customs has initiated a widespread action across 23 districts.

Vowing to intensify the crackdown, the customs department has launched action in four districts of KP and five districts of Sindh.

Sources said that the FBR is initially trying to curb the smuggling process and in the next phase will tighten the noose around profiteers who became a part of this organised crime.

According to sources, officials are monitoring activities around the clock from the control room to prevent smuggling of petroleum products into the country.

PM Imran Khan has been provided a report on the basis of the data from the FBR control room, said sources.

Speaking to The Express Tribune, Pakistan Petroleum Dealers Association Information Secretary Khawaja Asif said that the group had time and again alerted the government about the substandard petrol being smuggled into the country, highlighting its adverse effects on the economy, environment and vehicles.

Lamenting the delay in the necessary action, Asif said that those petrol pump owners who are not doing anything illegal are also being pestered and their stations are being sealed.

“The move will spread fear and panic,” he said.

Former president Lahore Chamber of Commerce Basit Ali welcomed the action, saying the crackdown on the substandard petroleum products will put an end to the revenue theft.

“The government should ensure that there is no shortage of petrol in the country,” said Ali in the same vein.