Kumail Nanjiani accused of 'taking steroids' for being 'too muscular'

5 nutrition myths we’ve all come across 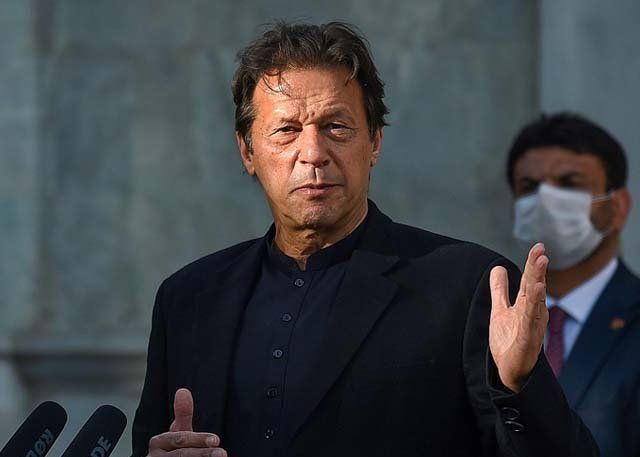 Prime Minister Imran Khan on Wednesday urged the families of Mach massacre victims to bury their loved ones as Balochistan and federal governments failed to convince the protestors to end their Quetta sit-in that has been continuing for four days amid extreme cold weather.

The prime minister took to micro-blogging site Twitter to reassure the Hazara families that he is “cognizant of their suffering and their demands” after the protest leaders refused to end their protest until PM Imran Khan himself visits them and listens to their demands.

“I share your pain and have come to you before also to stand with you in your time of suffering. I will come again very soon to offer prayers and condole with all the families personally. I will never betray my people's trust. Please bury your loved ones so their souls find peace,” the PM said in a series of tweets.

I share your pain & have come to you before also to stand with you in your time of suffering. I will come again very soon to offer prayers and condole with all the families personally. I will never betray my people's trust. Please bury your loved ones so their souls find peace.

Members of the Hazara community have blockaded a highway in Quetta with the bodies of slain coal miners since Sunday demanding that they will not withdraw until Prime Minister Imran Khan meets them and the killers are brought to justice.

Without mentioning any particular country, the premier stated that the government is well aware that Pakistan’s “neighbour was instigating this sectarian terrorism”.

I want to reassure the Hazara families who lost their loved ones in a brutal terrorist attack in Machh that I am cogniscant of their suffering & their demands. We are taking steps to prevent such attacks in the future & know our neighbour is instigating this sectarian terrorism.

Thousands of protestors blocked the Quetta’s key western bypass on Sunday after 11 coalminers belonging to Hazara community were brutally executed by the Islamic State terrorists at a residential compound near a mine site in Mach area of Bolan, some 100km away from the provincial capital.

While the Quetta protestors are staging a protest along with dead bodies of the victims in freezing cold, protests have also spread to other parts of the country and life was disrupted in Karachi on Wednesday after members of Hazara community blocked at least three key roads of the country’s economic hub.

On Tuesday, Federal Interior Minister Sheikh Rashid and National Assembly Deputy Speaker Qasim Khan Suri, who hails from Quetta, held a meeting with the Quetta protestors who made a number of demands including resignation by Balochistan government and face-to-face meeting with the PM.

Talking to the media, Rashid on Wednesday said the federal government had accepted seven out of the eight demands but added that he did not know if PM Imran Khan will be visiting Quetta or not.

“The protestors also demand the constitution of a judicial commission to probe into the incident. We accepted the demand but they have refused to end the protest until all demands are accepted,” he said.

“They [protestors] need to understand it is a global conspiracy. We are taking steps to prevent such attacks in the future and know our neighbour is instigating this sectarian terrorism,” he added.

After, Rashid and Suri, another delegation comprising Minister for Maritime Affairs Ali Zaidi and Special Assistant to the Prime Minister Zulfi Bukhari also held talks with the protestors in the early hours of Wednesday. However, the protestors refused to end their sit-in.

Later addressing a press conference together with Ali Zaidi, Balochistan Chief Minister Jam Kamal said Prime Minister Imran Khan will meet the Hazara community leaders but the burial of the coalminers should not be conditional on his arrival.

“President Dr Arif Alvi and Prime Minister Imran Khan will visit the Hazara community but the people have elected me as their chief minister and the responsibility rests on me," he said.

Kamal said efforts are under way to improve the security situation in the province. “The provincial government is striving for peace and development in the region, despite all the challenges.”

The CM said the incident took place on January 3 when he was in Dubai, but he returned after he heard the news. "The purpose of all of us coming here is to highlight the seriousness of the issue."

He said the enemy forces do not want the province to progress. “People will acknowledge that the law and order situation in the province has improved drastically.”

Federal Minister for Maritime Affairs Ali Zaidi said Pakistan's enemy is attempting to disrupt peace in the country. He reiterated that the burial of the bodies should not be associated with the premier's arrival.

Earlier, while charring a high-level meeting on the province’s law and order situation, Jam Kamal reaffirmed his support for the victims of Mach. He asserted that the barbarians responsible for the Mach massacre would be held accountable.

The Consulate General of Afghanistan has written a letter to the Ministry of Foreign Affairs requesting it to return the bodies of three Afghan citizens, who were among the 11 Mach victims, to Afghanistan.

"As you know, in the terrorist incident that took place in the Mach area of Bolan district of Balochistan province by the anti-governments and joint terrorists of the two countries, seven Afghan citizens are among the victims."

The heirs of three martyrs have requested that their dead bodies be transferred to Afghanistan, the letter said. "Therefore, your esteemed office is kindly requested to contact the relevant authorities to grant permission for transferring the mentioned three corpses via the Chaman-Spin Boldak Corridor."