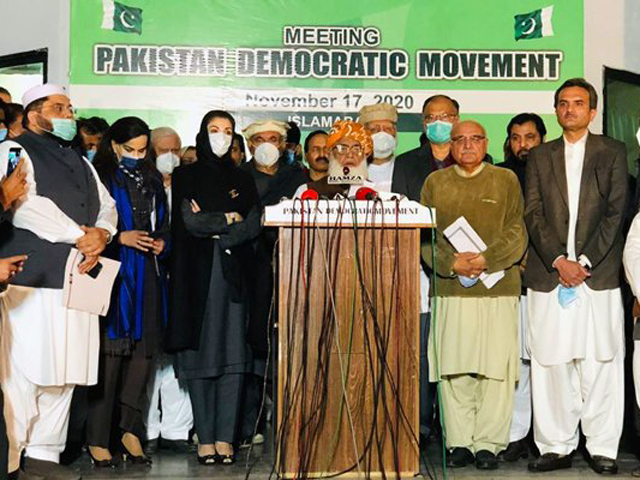 The 11-party opposition alliance – the Pakistan Democratic Movement (PDM) – has reiterated its resolve to hold its December 13 rally in Lahore according to its schedule, warning that it will resist any attempts by the government to stop or sabotage the power show.

The PTI-led Punjab government, however, made it clear that the opposition parties would not be given permission to hold any rally in Punjab’s provincial capital in view of a court order.

Speaking on the occasion, PML-N Punjab President Rana Sanaullah said the PDM will hold a rally as per plan at the Greater Iqbal Park come what may.

He hoped that the government had learnt its lesson from the ‘Multan fiasco’ and would put no hurdles in holding the rally. “If any measures are taken to stop the rally, the PDM would respond to them in a befitting manner,” he said.

“The upcoming PDM rally would be a referendum against the selected and puppet government of the PTI. People from all across the province would take to the streets on December 13 to demand free and fair elections,” he added.

JUI-F leader Abdul Ghafoor Haideri said there is a consensus among the opposition parties that the PTI government is “a selected and puppet government”.

“We hoped that powers that be would learn some lessons from the July 2018 election experiment. However, they have apparently not learned anything as they once again installed a puppet government in Gilgit-Baltistan region after a rigged election,” he said.

He said the JUI-F had taken out fifteen Azadi marches throughout the country before the establishment of the PDM whereas after formation of the PDM they have organized five mega rallies. “We have not taken the law into our own hands in any of their events.”

PPP leader Chaudary Manzoor said if the government tried to stop the Lahore rally then the reaction from opposition parties would be hundred times bigger. “The PPP workers are not ready to back down anymore,” he said.

Addressing a joint press conference, Dr Firdous Ashiq Awan and Punjab Law Minister Raja Basharat said the government cannot give permission to any political party to hold a rally in view of a court order.

“We advise the opposition not to play with public lives. Coronavirus cases are increasing with every passing day,” Basharat said. He said the opposition has not yet submitted any application seeking permission for holding the public gathering.

Dr Firdous said the opposition has yet to nominate convener of the public gathering.

“The government is very clear that law will take its course if anyone tries to violate the coronavirus safety SOPs which impose embargo on all kinds of public gatherings,” she added.