'Trump advisers must tell him when it's time to go'

Jill Biden: a chance to transform the role of US first lady

She becomes the first woman, first Black American and first Asian American to win the second-highest US office 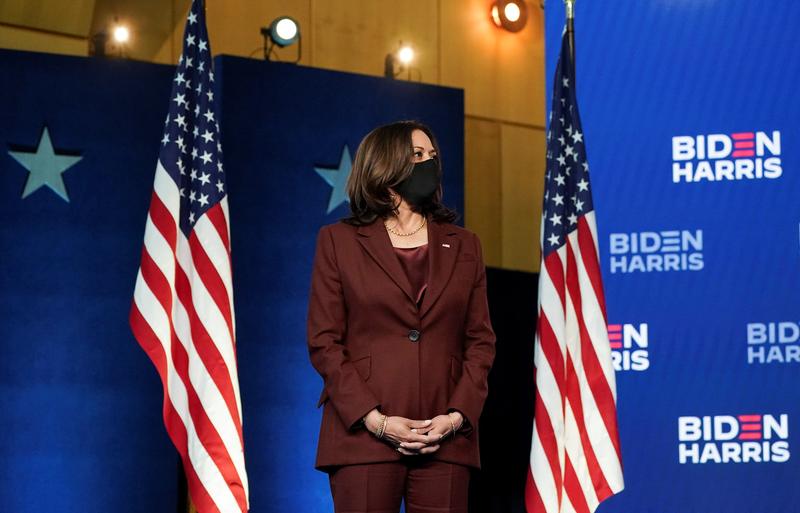 Kamala Harris made history on Saturday with her election as Joe Biden’s vice president, becoming the first woman, first Black American and first Asian American to win the second-highest US office.

Harris, 56, is widely seen as an obvious candidate for the Democratic Party nomination in 2024 should Biden, who will be 78 at their inauguration on Jan. 20, decide not to seek a second term. She hasn’t weighed in publicly on such speculation.

Edison Research and the major US television networks on Saturday projected their victory, based on unofficial final results, even though the incumbent president, Republican Donald Trump, vowed to continue fighting in courts.

A US senator from California, Harris has a track record of shattering glass ceilings. She served as San Francisco’s first female district attorney and was California’s first woman of colour to be elected attorney general.

Her background in criminal justice could help a Biden administration tackle the issues of racial equality and policing after the country was swept by protests this year. She is expected to be a top adviser on judicial nominations.

Harris, whose mother and father emigrated from India and Jamaica, respectively, had her sights set on becoming the first woman US president when she competed against Biden and others for their party’s 2020 nomination.

She dropped out of the race last December after a campaign hurt by her wavering views on healthcare and indecision about embracing her past as a prosecutor.

Biden looked beyond some of the harsh words Harris had for him in that campaign to name her his running mate in August. She has proven to be a valuable and polished stand-in, appealing especially to women, progressives and voters of colour, all critical to the party’s election hopes.

Harris, who developed a deep fundraising network during her Senate and White House bids, has been instrumental to Biden’s raking in record sums of money in the closing months of the campaign. Her selection sparked a burst of excitement in the Democratic base and among the party’s donors.

“Harris always made the most sense as a running mate for Biden because she had the ability to help him unify the Democratic coalition across racial and generational lines and was able to spike base enthusiasm,” said Joel Payne, a Democratic strategist who worked for Hillary Clinton’s 2016 presidential campaign.

Accusations from progressives that Harris did not do enough to investigate police shootings and wrongful conviction cases when she was California’s attorney general helped doom her own presidential run but surfaced little during her time as Biden’s running mate.

Harris has often defended her record, saying as she did in a town hall event last year that she had worked her whole career “to reform the criminal justice system with the understanding that it is deeply flawed and in need of repair.”

Trump and his re-election campaign had sought to paint Harris instead as a tool of the Democratic left who would wield power and influence behind the scenes in a Biden presidency.

Prior to her selection, several Biden aides say that Harris was able to put to rest concerns among some in the former vice president’s camp that she would be too personally ambitious to make a trustworthy partner.

Harris has shown herself to be a team player, taking on a lower-profile role and holding virtual and in-person political events that sometimes drew little news coverage, while often speaking in terms of what Biden would do for the country if elected and making an impassioned case against Trump.

“Joe and I were raised in a very similar way,” Harris said of Biden at her October debate against Vice President Mike Pence. “We were raised with values that are about hard work, about the value and the dignity of public service and about the importance of fighting for the dignity of all people.”

Harris juggled her running mate duties with her day job in the Senate. Befitting her background as a prosecutor, she was a deft cross-examiner of US Supreme Court Justice Amy Coney Barrett at Barrett’s Senate confirmation hearing in October, weaving Biden’s campaign message on healthcare and climate change into her line of questioning.

As the Senate’s only Black woman, Harris emerged this year as a leading voice on racial justice and police reform after Minneapolis police killed African-American man George Floyd in May. She marched with protesters on the streets of Washington and won over some liberal sceptics.

Asked on “60 Minutes” last month why, given Biden’s age, he believed Harris would be ready to step into the presidency if something happened to him, the presidential candidate rapidly fired off five reasons.

“Number one, her values. Number two, she is smart as a devil, and number three, she has a backbone like a ramrod. Number four, she is really principled. And number five, she has had significant experience in the largest state in the Union in running the justice department that’s only second in size to the United States Justice Department. And obviously, I hope that never becomes a question,” he said.

Harris is married to attorney Douglas Emhoff, who has been a fixture on the campaign trail. His two children from a previous marriage refer to their stepmother as “Momala.”