The Federal Board of Revenue (FBR) has achieved its first quarter tax collection target and pooled Rs1 trillion but it needs to pull up its socks as the monthly target has been missed for the second successive time.

Contrary to an overall good performance in the July-September quarter of fiscal year 2020-21, the FBR could not mobilise taxpayers to file their annual income tax returns.

Till the statutory deadline of September 30, around 325,000 people and companies submitted their annual returns, which were 28% less than the same period of last year. Till September 30 last year, about 450,000 people had filed the returns.

As compared to total returns of nearly 2.8 million filed by individuals and companies last year, the filing of returns was many times lower, also because of late finalisation of the income tax return. The FBR is going to officially announce an extension in the last date for submitting the returns.

As against the first quarter target of Rs970 billion, the FBR provisionally collected nearly Rs1 trillion, according to officials. The collection was also higher by Rs40 billion or 4.1% when compared with Rs959 billion collected in the first quarter of last fiscal year. The Rs1 trillion worth of collection may further increase by Rs10 billion, once the reconciliation of figures is done at all levels.

However, the 4.1% growth rate is not sufficient to achieve the annual tax collection target of Rs4.963 trillion, which needs a pace of over 22%.

The 4% revenue growth is also less than half the inflation rate, which means the FBR has not been able to fully capture the impact of increase in prices and there are revenue leakages in field formations. 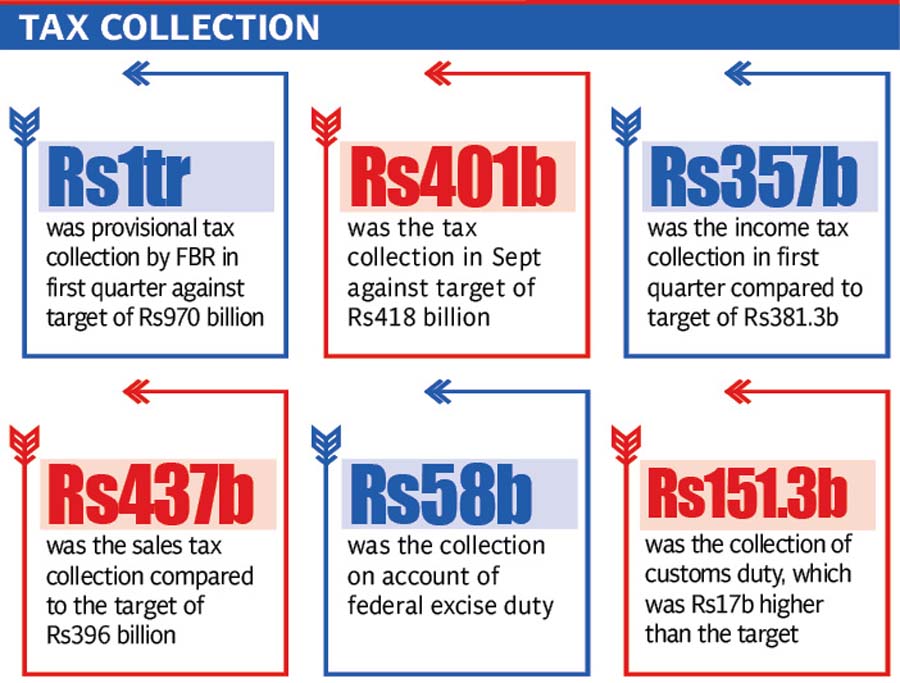 The share of income tax in total tax collection further shrank to 35.8% and the government is burdening the economy and people with more indirect taxes, which are regressive in nature and hurt the poor more than the rich. Out of Rs1 trillion, the income tax collection was just Rs357 billion.

For the second successive month, the FBR missed the tax collection target by Rs17 billion in September. The FBR provisionally pooled Rs401 billion in the month as against the target of Rs418 billion.

However, the monthly collection was still 4.7% better than September 2019, when the FBR collected Rs383 billion. The sole reason for missing the monthly target was low collection of income tax and federal excise duty.

The three-month federal excise duty collection amounted to Rs58 billion, up by Rs8 billion or 7.3%. Customs duty collection stood at Rs151.3 billion as against collection of Rs155 billion in the same period of last fiscal year, showing a decline of 2.6%. But the collection was Rs17 billion higher than the target.

The customs duty collection has been impacted by the reduction in imports and the government’s decision to exempt over 1,600 tariff lines from the duty. However, it has imposed additional customs duty to recoup some of the losses.

Pakistan Customs said it exceeded the target despite adverse impact of Covid-19 on the economy and reduction in imports as part of the government policy. It added that the monthly target was exceeded by Rs7 billion in September.

Pakistan Customs said it also took extraordinary measures to resolve the issues faced by transit trade by realigning the process at Torkham and Chaman borders and clearing the backlog at Karachi ports.

The en route time of containers from the port to Afghanistan was reduced from 28 days to five days in the past three weeks, it added.

Almost 12,000 containers had been stuck up at ports and on the way to Afghanistan due to enhanced scanning requirements, which increased the hardship faced by Afghan importers and Pakistani exporters.

There was a 56% increase in the value of seized goods as compared to confiscation of Rs4 billion worth of goods in September last year.

Overall, the Customs seized Rs14.4 billion worth of goods in the first quarter as compared to Rs8.5 billion in the same period of last year.

However, there is a need to check smuggling on borders, particularly the role of some elements in the law enforcement agencies, according to sources in the FBR.

Balochistan's flood -- not so natural a disaster