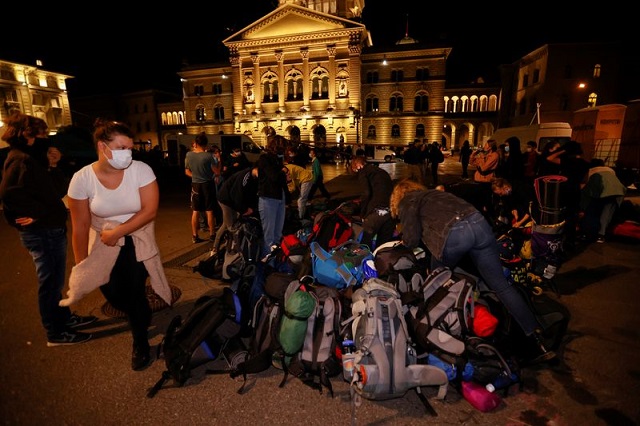 Up to 400 protesters occupied a square near the Swiss National Bank and parliament in Bern on Monday, as leaders of a group that has also targeted banks including Credit Suisse said they sought to highlight government inaction on climate change.

A spokeswoman for the protesters, from various environmental campaign organisations, said they were building a camp at the so-called Federal Square in the heart of Bern’s political centre to highlight demands to reduce net carbon emissions to zero by 2030.

About 40 protesters chained themselves to objects or to each other to prevent them from being removed easily by police, should authorities object, a Reuters witness said.

How successful has Pakistan’s climate change fight been?

“We woke up quite early and came here to the Federal Square to...demand net zero by 2030 and climate justice now,” said Frida Kohlmann, the spokeswoman. “We will be here from today until Friday. The crisis is so much more urgent, many people don’t know that, and we really hope this is going to help toward this.”

The groups were also involved in demonstrations in Zurich and Basel in June 2019, in which dozens of activists were eventually arrested after blocking entrances to Swiss banks Credit Suisse and UBS as they demanded an end to financing of fossil fuel activities.

Police in Bern, location of Switzerland’s federal government, sent officers to the protest who had made contact with those involved in the demonstration, a spokeswoman said, adding that the situation, including authorities’ response, was still developing.