Should we re-open schools? 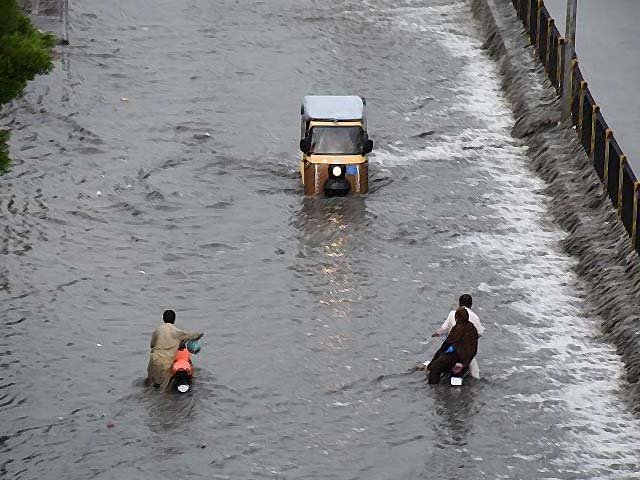 A view of a flooded road after heavy monsoon rains in Karachi. PHOTO: AFP/FILE
KARACHI:

As the exasperated, irate citizens of the port city took to the inundated streets and complained of the absence of provincial and local authorities on Sunday, little effort was seen on the latter’s part to salvage the situation, with the Sindh rehabilitation minister pointing only to the provision of a handful of dewatering pumps to some districts.

The weekend’s downpour laid bare the lack of planning by the authorities, and the hollowness of their promises of making preparatory measures to combat rain inspired confidence in few Karachiites, with some once again accusing the government of corruption.

In some areas of the city, the rain left the roads resembling rivers or cracked in several places.

To identify a few, the track of Manghopir Road between Banaras and Garam Chasham, Post Office Road, the Liaquatabad flyover, many arteries in SITE Industrial Area, the road near Orangi nullah and several other newly constructed ones in Korangi Industrial Area have been damaged at many spots, while other roads remain submerged in a filthy mixture of rainwater and sewage.

Roads near Banaras Chowrangi, where standing rainwater has been adulterated by wastewater, had become a source of contamination, with dirty water seeping through the huge pits on it and entering water supply pipelines.

Adding to the misery is the emergence of a garbage dump under Banaras Bridge, mainly due to encroachments near Banaras Chowrangi. Trash from this dump has been making its way into a nearby rainwater drain.

Lamenting the situation, citizens said that while most roads in the city were already in bad shape, the rain only aggravated the problem. They attributed their misery to the authorities ignoring the basics of engineering during the construction of roads and improper sewerage systems.

Now, they fear travelling these roads, with safety hazards staring them in the face. However, the residents of Korangi are left with little option but to put their lives at stake.

Even as police placed barriers and authorities moved to block the inundated Korangi Causeway and Korangi Brige as a consequence of flooding in the Malir river, many from the locality continue to cross it.

According to them, the thoroughfares are submerged in rainwater every year during monsoon, forcing them to detour elsewhere. And as they did so on Sunday, the spill-over effect was visible on Sharae Faisal and other roads, choked by long queues of vehicles.

Irate, Korangi’s residents demanded the construction of a flyover across the Malir river.

Meanwhile, authorities claimed that water from the thoroughfares was being drained into the sea.

The city’s situation is despite multiple claims by the provincial and local governments of making preparatory measures since the first rain spell this year, and the cleaning of nullahs - an issue that came into the spotlight after the National Disaster Management Authority was called to clean three major nullahs in the city. The task was said to have been completed and the Sindh government, too, claimed that it had been cleaning nullahs.

Even then, Gujjar nullah, one of those cleaned by the NDMA, overflowed on Friday. Meanwhile, in Surjani, nearly 200mm of rain over the weekend left up to five feet of standing water, pushing residents to abandon their homes in search of safety.

Frustrated residents of Shadman Town staged a demonstration on Sunday and blocked the road leading to Nagan Chowrangi.

The protesters slammed the provincial and local government over the lack of a proper sewerage system in the area and failure to remove garbage. They decried that trash heaps, combined with overflowing sewers in the aftermath of the rain, had plagued them with an unbearable stench and health hazards.

Disrupting traffic, they refused to call off the protest even after police and Rangers personnel reportedly baton-charged them. They later dispersed after a round of negotiations with the law enforcers.

On Saturday, PMD director Abdul Qayyum Bhutto said the current monsoon system, earlier expected to end on Sunday, was being strengthened by the continuous appearance of low-pressure systems, under which up to 100mm rain could be recorded in a single day over the coming few days.

Consequently, Karachi is predicted to witness heavy rains today (Monday) and tomorrow (Tuesday), with some areas receiving more than 100mm of rain, as per the latest PMD forecast.

In light of the prediction, the PMD has issued a warning for urban flooding.