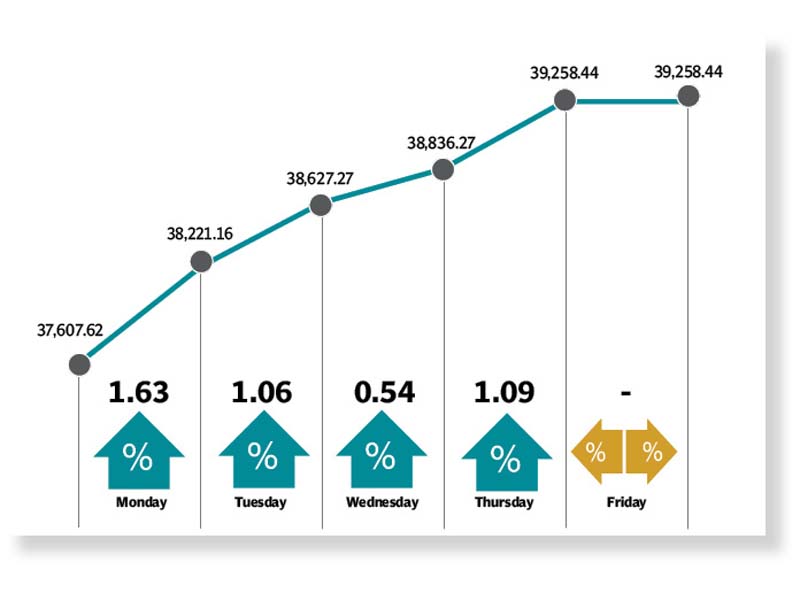 The bullish spell continued at the Pakistan stock market for the sixth successive week as the benchmark KSE-100 index closed all sessions in the green in the week ended on July 30, 2020 following a rapid decline in Covid-19 cases across the country.

“In 23 trading sessions out of the last 25 (starting June 26), the index has closed in the green zone, offering a cumulative return of 16.5% during this brief period,” said JS Global analyst Ahmed Lakhani.

At the start of the week on Monday, the trading kicked off on a bullish note and robust investor sentiment, buoyed by the State Bank of Pakistan’s decision to delay monetary policy announcement, helped the index climb over 600 points.

The announcement provided much-needed clarity to market players and encouraged them to build long positions.

The uptrend continued for the rest of the week owing to positive news flow, which kept investor sentiment on the stronger side. Midway through the week, the State Bank received $505 million from the World Bank, which aided the rupee and lifted pressure off foreign currency reserves.

Oil sector stocks came under pressure and traded sideways despite approval by the Economic Coordination Committee of a revision in petroleum product prices on a fortnightly basis to help the oil sector increase its profits. Global crude oil prices also staged a recovery during the week.

A drastic drop in Covid-19 cases across the country bolstered investor interest as market participants foresaw normalisation of economic activities over the coming days.

The banking sector remained in the limelight throughout the week on anticipation of robust financial results. Index-heavy sectors including automobile and cement also posted substantial gains.

“It seems that the market has already ignored Covid-19 as reflected in a continued across-the-board rally in stocks,” said Lakhani.

Foreign selling continued during the week under review, which stood at $9.7 million compared to net selling of $9.3 million in the previous week. Selling was witnessed in exploration and production ($5.1 million) and power distribution ($1 million) sectors.

On the domestic front, major buying was reported by mutual funds ($11.3 million) and individual companies ($2.2 million).

Among major news of the week were PSO commissioning the first electric vehicle charging station, State Bank expanding the scope of Shariah-compliant financial services and government setting aside Rs1.5 billion in subsidy for local tractors.