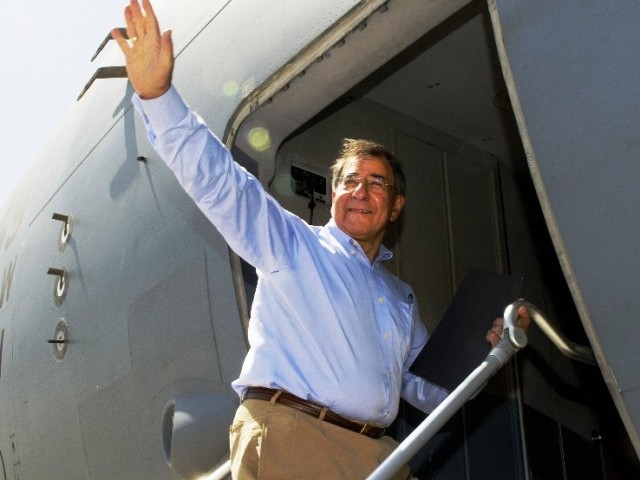 WASHINGTON: Defense Secretary Leon Panetta warned Thursday he would not accept large military cutbacks under a debt deal, charging the move would weaken the United States faced with rising powers.

Panetta, holding his first formal news conference since taking charge of the Pentagon a month ago, launched a pre-emptive strike as a special committee prepares to slash spending under a last-ditch deal to avert a US debt default.

Panetta, a veteran Democratic Party dealmaker who was once in charge of budgets, said that “God willing” the process would not trigger sweeping cuts under which the Pentagon could lose another $600 billion.

Such cuts “I believe would do real damage to our security, our troops and their families and our military’s ability to protect the nation,” Panetta said.

“It is an outcome that would be completely unacceptable to me as secretary of defense, to the president and, I believe, to our nation’s leaders,” he said.

Defense spending, which has nearly doubled since the September 11 attacks a decade ago, accounts for 20 percent of the federal budget. The United States spent some $700 billion last year on defense, far more than any other country.

President Barack Obama is planning to withdraw the last US troops from Iraq at the end of this year and pull combat troops from Afghanistan by the end of 2014. US forces killed terror leader Osama bin Laden in Pakistan in May and Panetta recently said a strategic defeat of al Qaeda is within reach.

Panetta insisted the United States still needed a robust defense to “bring those wars to a stable conclusion” and to face threats from Iran and North Korea which both have controversial nuclear programs.

In a likely allusion to China, Panetta said: “Then the responsibility is obviously to be able to project our power in the world in order to make sure rising powers understand that the United States still has a strong defense.”

But Mullen also voiced “growing concern” as China ramps up military spending, saying that when the United States asks questions of Beijing, “Typically the answer is defensive. We certainly see other capabilities that are not just defensive.”

Mullen, who once called the debt the biggest US challenge, said sweeping cuts would have a “devastating impact” for the military.

But Representative Mike Honda of California, a liberal Democrat who serves on the House Budget Committee, said the United States can “easily cut” $1 trillion in defense over the next 10-12 years “without compromising national security.”

If Mullen “is serious when he says that the national debt is the greatest threat to our national security, now is the time for Mullen and the Pentagon to start doing something about it,” Honda said.

The debt deal signed into law by Obama on Tuesday calls for at least $2.1 trillion in cuts in government spending over 10 years. The White House said military spending will fall by $350 billion in the first round of $917 billion in cuts, in line with Pentagon expectations.

A special congressional committee has been created to come up with a second round of $1.5 trillion in further cuts from all areas.

But if the bipartisan committee fails, then cuts of $1.2 trillion would automatically come into force, divided evenly between military and non-military spending.

Most observers believe the committee is unlikely to approve such major defense cuts on its own as Obama’s opponents in the Republican Party are eager to preserve military spending.