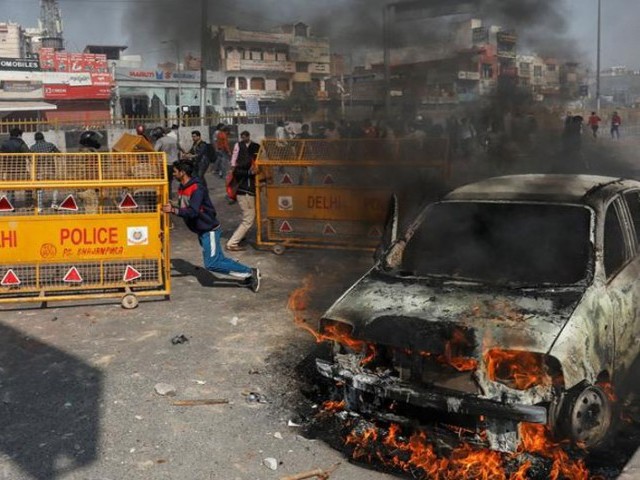 KARACHI: India’s capital New Delhi has been in the grip of the worst sectarian violence in decades as Hindutva mobs are on an anti-Muslim rampage.

The violence in Delhi has taken away the spotlight from the much-touted maiden visit by US President Donald Trump.

Through the Citizens Amendment Act 2019, the Indian government aims to fast-track citizenship for non-Muslims who arrived in India before December 31, 2014, from Afghanistan, Bangladesh and Pakistan.

The Modi-led government also plans to implement the National Register for Citizens nationwide – which would provide legal cover to expel Muslims who do not have sufficient citizenship documentation.

Brewing since December 2019, the unrest erupted in New Delhi over the weekend but turned deadly on Monday with Reuters reporting at least 19 deaths and hundreds with bullet wounds and head injuries in hospitals across New Delhi.

A day before the violence erupted, social media posts suggested Rashtriya Swayamsevak Sangh (RSS) workers marked the houses of Muslims with a saffron flag in different localities of Northeast Delhi.

Houses of Muslims marked and saffron flags put in the localities of Northeast Delhi. This whole episode of violence has been orchestrated by the RSS-BJP. pic.twitter.com/KMZpjMsPjs

A mosque was set on fire by the mob shouting “Jai Shri Ram” before they climbed to the top and planted a saffron flag on the minaret.

Re-posting this video after verifying its authenticity. It is from Delhi. Men marching on top of a mosque, vandalising it and placing a saffron flag over it. pic.twitter.com/bScgJMxKc3

Horrifying visuals emerged of Delhi Police and the mob beating wounded Muslim men laying on the ground and forcing them to sing the Indian national anthem.

When the protector turns perpetrator, where do we go?!
Shame on @DelhiPolice for disrespecting the value of human life. Is this how the Delhi Police fulfills its Constitutional duty to show respect to our National Anthem?
(Maujpur, 24 Feb)#ShameOnDelhiPolice #DelhiBurning pic.twitter.com/QVaxpfNyp5

In a video report by The Wire, a Hindutva mob boasted setting a Muslim religious site on fire. “How dare they protest the CAA and NRC? Is it their country? It is our country.”

Another video showed a RSS mob attempting to enter houses of Muslims.

While Delhi Police was seen providing security to the saffron mob.

Recieved this from Brijpuri in Delhi today. Police is escorting Hindu Mobs who are carrying rods and even guns to attack muslims.

Police is escorting the Hindu mobes while they're torching Muslim shopes. #Delhi pic.twitter.com/twmvLtBkAa

Police is escorting the Hindu mobes while they're torching Muslim shopes. #Delhi pic.twitter.com/twmvLtBkAa

I'm at Mustafabad, near the Loni Border, and new fires (set post-9pm) are burning in front of our eyes – Muslim jhuggis and tempos, according to onlookers – by masked men shouting JSR. Delhi Police are present saying they are unable to intervene. pic.twitter.com/tXT6k2qcXB

“It’s been over 24 hours, still you are outnumbered Delhi Police?” asked NDTV reporter Arvind Gunasekar who was also attacked by the mob while covering the clashes.  Your personnel standing at the entrance of Karawal Nagar as mute spectators, he added.

It’s been over 24 hours, still you are outnumbered @DelhiPolice ?
Your personnel standing at the entrance of Karawal Nagar being a mute spectator. Look what’s happening here
Literally none scared for rule of law ! pic.twitter.com/VsNZbQA1C1

Gunasekar along with Saurabh Shukla and News 18’s Runjhun Sharma were attacked for filming the mob demolish a religious site. Gunasekar said he went to record visuals when the mob came onto him. “They asked me my religion. It was completely baffling,” he told NDTV.

The reporter said they saw two policemen on two bikes escorting the mob to the religious site before vanishing.

Shukla said he rushed to rescue Gunasekar and it was only after the mob realised he belonged to their community that they stopped beating Gunasekar. “I told them my name… I had to show my Rudraksh [prayer beeds] to prove I’m a practising Brahmin. They said you’re from our community then why are you doing this [reporting].”

#Watch | NDTV reporters share how they were assaulted by armed mobs in violence in N-E Delhi today.#DelhiViolence #Delhi #DelhiCAAClashes

“We were reporting as a team,” Sharma narrated the incident to News18. “We saw a religious structure being demolished by a mob – group of 100-200 men – we saw bricks falling down and stopped the car on the main road – a flyover – and headed towards the religious structure.”

She said when Gunasekar began filming, within seconds a crowd rushed towards the reporters. “Before we could even think, they started beating Gunasekar. These men were armed with iron rods and hockey sticks. He was bleeding, he lost a tooth.”

Sharma said the men heckled Shukla and surrounded her. “They asked us for religious credentials. It wasn’t easy. We had to fold our hands in front of them and pleaded for several minutes before they let us go.”

“I had to take my press ID out and flash it. I said ‘Look I am Sharma. I belong to this community. Please let us go’. That worked for me. Had I been from another community, I don’t know what would have happened.”

#CitizenshipShowdown | @Runjhunsharmas narrates her ordeal as she was heckled by rioters in the affected area of north-east Delhi. pic.twitter.com/uZF3LH4Umt