At least 27 dead, over 200 injured in New Delhi sectarian riots

At least 27 dead, over 200 injured in New Delhi sectarian riots 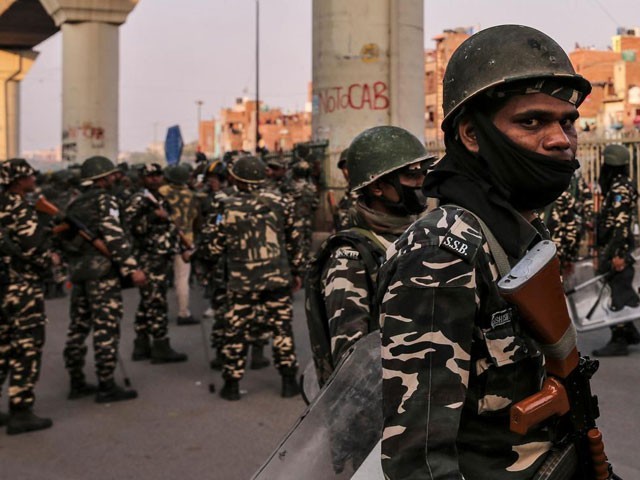 Paramilitary troops patrol in a riot affected area after clashes erupted between people demonstrating for and against a new citizenship law in New Delhi, India, February 25, 2020. PHOTO: REUTERS

NEW DELHI: At least 27 people have been killed and more than 200 injured in New Delhi during clashes between Hindutva mobs and anti-CAA protesters.

According to Indian media, 27 people died and nearly 200 others were wounded in the first two days of violence, the director of the hospital where people were taken, told AFP on Wednesday.

The hospital director added that at least 60 people had suffered gun shot wounds.

New Delhi’s Chief Minister Arvind Kejriwal has said the army should be called in and a curfew imposed in the affected areas of the capital to control the rampaging mobs.

I have been in touch wid large no of people whole nite. Situation alarming. Police, despite all its efforts, unable to control situation and instil confidence

Am writing to Hon’ble HM to this effect

The clashes, which coincided with a visit to India by US President Donald Trump, erupted early this week between thousands demonstrating for and against the new citizenship law introduced by Prime Minister Narendra Modi’s Hindu nationalist led government.

Critics say the law is biased against Muslims and undermines India’s secular constitution.

Kejriwal, who visited the Guru Teg Bahadur Hospital, earlier pleaded for the “madness to stop”, according to PTI.

Delhi Police spokesperson Mandeep Randhawa called on locals “not to take the law in their own hands”.

National Home Minister Amit Shah, whose ministry controls law and order in the capital region, met with senior Delhi government officials and promised to deploy more police if they were needed, Kejriwal added.

Broadcaster NDTV said three of its reporters and a cameraman were attacked by a mob on the northeastern fringe of the city of 20 million people.

“There is hardly any police presence in the area. Rioters are running around threatening people, vandalising shops,” said a resident of the poor, migrant neighbourhood of Maujpur.

At Jaffrabad, one of the poorest neighbourhoods on the fringes of Delhi and home to shanty colonies, an AFP reporter saw locals turn off their lights and lock their doors amid a massive police presence.

Police manning barricades said mobs in the area were threatening journalists and that their officers had come under attack.

“People are killing (each other). Bullets are being fired here,” said a tailor in Jaffrabad, adding that he was returning home to his village in northern Uttar Pradesh state.

“There is no work… It is better to leave than to stick around here. Why would we want to die here?”

The new citizenship law has raised worries abroad – including in Washington – that Modi wants to remould secular India into a Hindu nation while marginalising the country’s 200 million Muslims, a claim he denies.

After meetings with Modi, Trump said on Tuesday that the riots were an ‘internal matter’ for India.

As Air Force One flew President Trump and his delegation out of New Delhi late on Tuesday, Muslim families huddled in a mosque in a northeast corner of the city, praying Hindu mobs wouldn’t burn it down.

Global rights group Amnesty International tweeted that “political leaders in India who are fuelling hatred and creating a violent environment by making hate speeches must be immediately held accountable”.