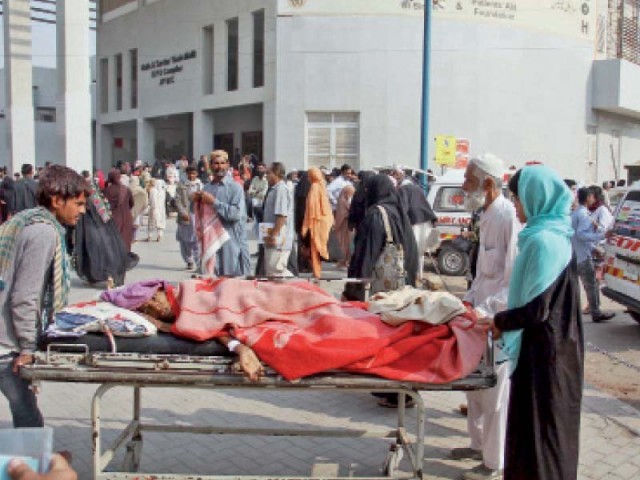 A patient lies on a stretcher outside JPMC as doctors at the hospital went on strike for two hours on Thursday. PHOTO: online

“It is not possible for the federal government to look after the hospitals’ affairs from Islamabad,” commented Dr Pechuho in a press conference at her office on Thursday, adding that the service delivery was a mandate of the provincial government after the 18th Amendment.

She pointed out that the federal government had not allocated funds for the hospitals, raising questions about its intentions. “If they allocate a budget for them, we will be assured that they are serious about taking charge of them,” she added. “They don’t talk to the Sindh government on the issue but [their delegations] visit the hospitals for photo sessions.”

Insisting that the Centre come up with a budget allocation by next month, she said that her department would formulate a plan if they did not do so. “We think the province [Sindh] can run the hospitals’ affairs smoothly,” she added.

Asked about the on-going doctors’ protest at JPMC, the minister said that the doctors were the staff of the Jinnah Sindh Medical College. “The college is provincial while the professors work at JPMC. Their fate is still undecided,” she maintained, adding that she had already held a meeting with the protestors. “I have asked them to wait until March; we do not want negative impacts on anyone linked to the hospitals.”

Responding to another question about protesting paramedics, Dr Pechuho said that their demands had been entertained. “We won’t be blackmailed by the staff. Come and discuss your issues with us,” she stated.

She added that the Sindh government had limited resources. “We cannot raise their salaries so frequently. I know there is inflation, but it has affected our budget too.”

Commenting that questions were being raised about increasing dog-bite cases in Sindh, she told reporters not to ask her about them. “It’s not my job to look after [stray] dogs. Ask the local government to control them. I do not feed dogs nor leave them on the roads,” she stated.

Claiming that the Sindh government was trying to provide the best possible treatment at district hospitals, she said that they were not just limiting themselves to uplifting hospitals in the metropolis.

“We are well aware of the burden on tertiary care hospitals,” she said, adding that officials were working on urban units around the city so the burden could be reduced.

Meanwhile, doctors at JPMC staged a protest against the possible transfer of the three hospitals to the federal government. They stopped attending to patients for about two hours, leaving hundreds of people going from one part of the hospital to another in search of treatment.

Shouting slogans and carrying banners and placards, the protestors maintained that the fate of JPMC, NICVD and NICH could not be decided without taking them into the loop.

If their demands were not heard, they warned, they would not attend to any patients in the outpatient departments in all three hospitals from Monday.

The staff will also observe a two-hour protest today (Friday).