Mushar­raf says he does not need to "reinve­nt the wheel" once he return­s to power in Pakist­an.
By Huma Imtiaz
Published: July 21, 2011
Tweet Email 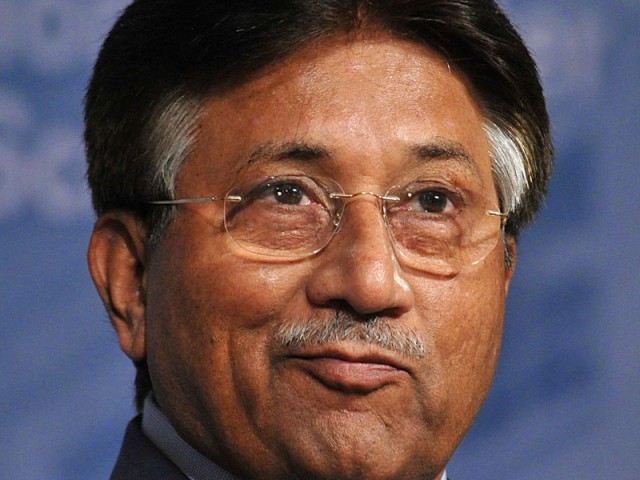 Former Pakistani President Pervez Musharraf delivers an address titled 'The State of the US-Pakistani Relationship' on July 21, 2011 at the Woodrow Wilson Center for Scholars in Washington, DC. PHOTO: AFP

WASHINGTON, DC: Twenty minutes before the event featuring former Pakistani president General (retd) Pervez Musharraf was due to begin, organizers at the Woodrow Wilson International Center for Scholars began redirecting people to move to an overflowing room – such was the rush to get a seat.

Fresh from his appearance at the Daily Show with Jon Stewart, General (retd) Musharraf walked in flanked by his aides and a few security officials and was introduced by WWCIS head and former Congresswoman Jane Harman.

Musharraf began his talk with a history lesson, maintaining the military narrative and its focus on India when he relayed the series of events that began from 1947. Musharraf said that militant groups spearheaded the fight against the Soviets in Afghanistan because the elite of Afghanistan had abandoned the country. Musharraf outlined the rise of militant groups in the late 80s and 90s of groups like Lashkare-Taiba and Jaish-e-Mohammad to fight against India in Kashmir.

Musharraf also talked at length of the US-Pak relationship and the trust deficit. He said that it pained him to see the state of affairs. He said that Pakistan has to explain its reasons for not conducting an operation in North Waziristan, whereas the US must be mindful of the sensitivities. Musharraf also mentioned the drone strikes, citing the indiscriminate civilian casualties as a point of concern.

When pressed on the issue of perhaps having done things differently, he said “whatever I did, I need to repeat it” if back in power. The only regret he has, he said, was on cutting a deal with BB and implementing the NRO, “Benazir violated the agreement with me to not return before the elections.”

When quizzed about whether he knew about Osama Bin Laden’s presence in Abbotabad since he was also COAS at the time that OBL allegedly moved there, Musharraf said that he was not aware, “whether anyone believes it or not”. He also said that he did not find the high walls of the Abbotabad compound to be unusual, and said that it was negligence, and not incompetence that led to no one knowing about OBL’s presence in the area.

Musharraf also criticized the “leadership vacuum”. Both the major political parties, he said, were not delivering. Citing his approval ratings of over 80 percent in early 2007 that suffered due to certain elements, adding that they were the events surrounding the judiciary – “I will not explain why I did what I did” – and the assassination of Benazir Bhutto. He said that he wouldn’t have to reinvent the wheel as he knew what worked, referring to his time when he assumed power in Pakistan in 1999 when the country was at the brink of default, but “performed admirably” after he took over.

Speaking to this correspondent after the event, the former President said that he would be returning to Pakistan on 23rd March 2012. Dubbing the case against him in the Benazir Bhutto murder case as politically motivated, Musharraf said he was willing to face it, including more political cases that he expected to come up once he returned. He said that there was a leadership vacuum in Pakistan and that his party would gain momentum once he returned.