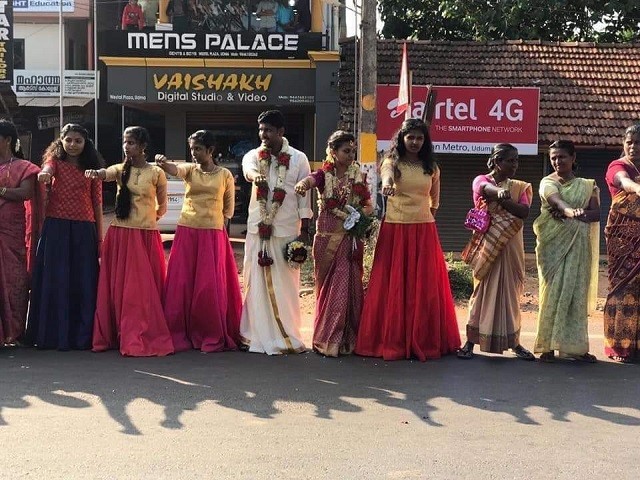 In a rare episode of staging protest against the controversial Citizenship Amendment Act (CAA), a 620km-long human chain was formed in India’s southwest state of Kerala when the country marked its 71st Republic Day on Sunday.

The protest was organised by Kerala’s ruling Left Democratic Front (LDF), where millions of people – including chief minister and several newly-weds– lined up from Kasargod in the north of Kerala to Thiruvananthapuram in the south to register their protest against the new controversial move, NDTV reported.

While protest was led by the Left party, it also witnesses people with opposing political views standing united in resistance against the anti-Muslim law.

What a moment. Lakhs of people out on the streets of Kerala on Republic Day to read out the preamble of the constitution, as a united resistance against Modi govt's oppressive #CAA_NRC

This was taken right outside the Kerala legislative assembly in Trivandrum.#CAA_NRCProtests pic.twitter.com/ai4vPjxBFe

“I believe I am here because it’s my duty to stand up for other citizens who are being sidelined on the basis of caste, creed or religion. This is our India and I stand united with everyone against the Citizenship Amendment Act,” Malayalam actress Sangeetha Mohan said.

A Muslim woman, wearing a hijab, said: “We are not here for politics. It’s not about party. We will live and die here in India.”

A man, next to her interrupted by saying that “they are trying to scare us. We are all Indians, we are all humans. That’s why we have joined the human chain”.

The new law does not extend the same protection to Muslim migrants as to six other religious minorities fleeing persecution, thereby undermining India’s commitment to equality before the law, enshrined in its constitution.

On December 31, Kerala passed an unanimous resolution in the state Assembly against the Citizenship Amendment Act, becoming the first state to urge New Delhi to repeal the law.

Congress-ruled Punjab and Rajasthan are the other two states to have passed such a resolution.

Not a chain, but an ocean. People from all the walks of life joined #KeralaHumanChain pic.twitter.com/LbtUxS3zRQ

The original story appeared on NDTV.