US ‘ready to assist’ Pakistan: Wells

US ‘ready to assist’ Pakistan: Wells 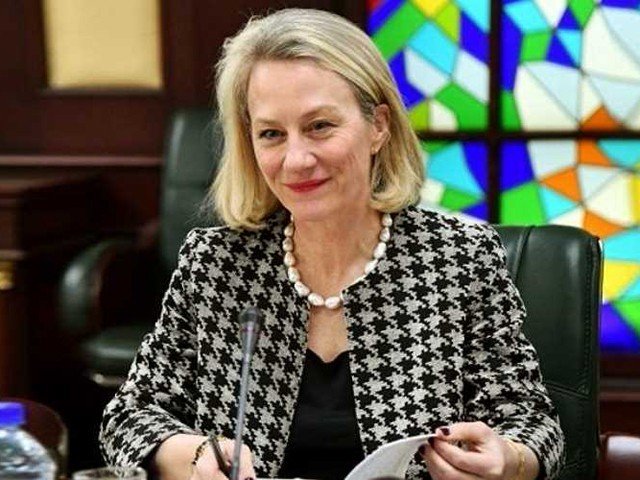 KARACHI: A senior aide of US President Donald Trump has acknowledged Pakistan’s efforts for fulfilling the obligations of the Financial Action Task Force (FATF), saying Washington stands ready to assist Islamabad in implementing them.

“We’ve been pleased to see progress by Pakistan towards fulfilling FATF obligations,” Alice Wells, the US principal deputy assistant secretary of state for South and Central Asian affairs, said while briefing the media in Washington about her recent trip to Pakistan, India and Sri Lanka.

Asked about Foreign Minister Shah Mahmood Qureshi’s request for US help to remove Pakistan from the global financial watchdog’s grey list, Wells noted that FATF was a technical process and an action plan had been presented to Islamabad.

“It’s a question of fulfilling the requirements that have been spelled out and that are asked of all countries in the international system. So it’s not a political process, but we certainly support and stand ready to assist Pakistan as it implements these obligations,” she added.

The US diplomat further said her country strongly encouraged Pakistan to work with the FATF and the international community to fully satisfy its action plan commitments.

“The completion of the FATF action plan is critical to Pakistan’s economic reform efforts, including its IMF programme, as well as for demonstrating sustained and irreversible action against all militant groups based in Pakistan without distinction.”

She noted that if Pakistan were not to meet the FATF obligations or to fail and be blacklisted, that would be devastating for Pakistan’s economic reform programme and for its ability to attract investors.

“The more evidence of Pakistan’s seriousness in both documenting its economy and in shrinking the space for militants to be able to take advantage of Pakistan’s either banking system or territory, the more confidence the international community and business community will have in working with Pakistan.”

Pakistan hopes to acquire US cooperation in next month’s FATF plenary to get off the ‘grey list’ after a meeting of the Asia-Pacific Joint Group in Beijing this week was informed that Islamabad had addressed 22 points of its action plan.

In Feb 2018, the FATF had found serious deficiencies in Pakistan’s anti-money laundering and combating financing of terrorism regimes and gave Islamabad a 27-point action plan to exit the grey list.

In Oct last year, it gave another warning to Islamabad to show full compliance by Feb 2020. Now, the FATF plenary will take place in Paris next month and take a decision about Pakistan’s status on the grey list.
Speaking on the issue of the lockdown in Occupied Jammu and Kashmir, Wells said the US was continuing to urge the Indian government to move swiftly to release political leaders detained without charge.

Wells added that the US was also pushing India to allow American diplomats regular access to the occupied region.

On India’s controversial anti-Muslim Citizenship Amendment Act, the US diplomat said the law was undergoing “a vigorous democratic scrutiny, whether it’s in the streets, by the political opposition, the media, and the courts”.

“We continue to underscore the importance of the principle of equal protection under the law,” she added.

The US diplomat also appreciated steps taken by Pakistan to advance the Afghan peace process. “Pakistan has important leverage to promote lasting security and stability in Afghanistan,” she observed. “I held meetings with government, military, civil society, and business leaders [in Islamabad]. At the top of the agenda was [an] understanding [on] how we can grow our bilateral relationship commensurate with the cooperation that we are achieving in promoting peace in Afghanistan and regional stability.”

Speaking about US-Pakistan ties, Wells said: “We’ve seen obvious progress in our relations with Pakistan, from the high-level engagement such as the President’s [Donald Trump] warm and constructive meeting with Prime Minister [Imran] Khan at Davos to the restoration of the International Military Education and Training programmes.”

She, during her visit, had “extensive conversations on how we can bolster our economic partnership where the US is Pakistan’s largest export market, largest trade partner, and historically one of its most significant investors”.

“There are obvious synergies in energy and agriculture, and opening Pakistan’s markets to American investments creates jobs and wealth without sacrificing standards or fuelling corruption,” she added. “We’re looking forward to welcoming 10 Pakistani buyer delegations to the US and five regional trade shows in 2020, which will build deeper relationships between the US and Pakistani firms. Prime Minister Khan’s economic reform efforts contributed to the World Bank identifying it as one of the top 10 reformers globally in 2019.”

On her controversial remarks about China-Pakistan Economic Corridor (CPEC) projects, Wells said: “The argument that I was making in Pakistan is that there are opportunities and should be opportunities for American investment, American energy firms, and manufacturers are interested in the Pakistani market. You have Exxon-Mobil, Excelerate, Cargill, Honeywell, all pursuing major new investments. You have Uber creating 80,000 jobs for Pakistani youth.”

The US diplomat said it was Pakistan’s sovereign right to decide what investment it sought and on what terms. “As a friend of Pakistan, we certainly urge that they take on investment projects that create wealth, generate employment, and are sustainable, and think we have great options for the Pakistani market,” she added.