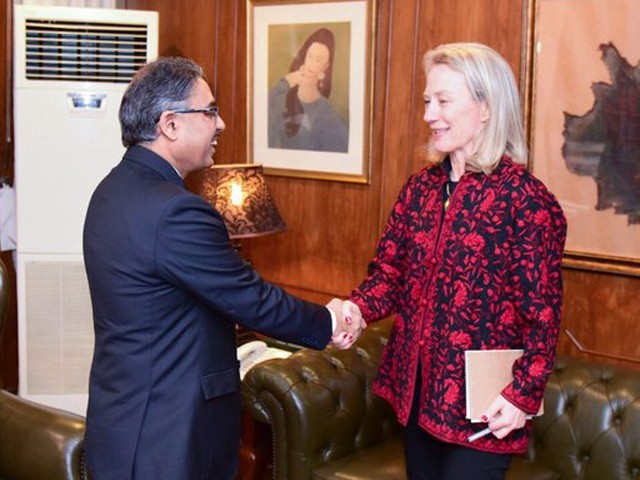 ISLAMABAD: Pakistan has assured the United States of its role seeking a political solution of the lingering conflict in Afghanistan amid reports that the US and Afghan Taliban are close to striking a peace deal after over yearlong painstaking process.

The Afghan peace process was one of the agenda items during a meeting between the visiting US chief diplomat for South Asia, Ambassador Alice Wells and Foreign Secretary Sohail Mahmood at the Foreign Office on Tuesday.

Ambassador Wells is on a four-day tour to Pakistan as part of ongoing consultations between the two countries on a wide-range of issues covering bilateral ties as well as other regional and international issues.

In September last year, the US and Taliban had almost agreed to sign the framework agreement but President Trump walked away from the deal at the last minute, citing Taliban’s continued attacks targeting the American servicemen. Since then the US has been pushing Taliban to agree on a ceasefire or at least reduce the level of violence in order to take the process forward.

Recently, the Afghan Taliban indicated that they were willing to reduce the level of violence, paving way for the much-awaited peace deal. However, it is believed that the US wants Taliban not to restrict the apparent truce only for few days. Efforts are being made to convince the insurgent group at least to announce a one month ceasefire.

Pakistan is thought to have been playing a key role in the negotiations.

Today’s meeting at the Foreign Office came just ahead of an interaction between Prime Minister Imran Khan and President Trump on the sidelines of World Economic Forum at the Davos. This would be their third meeting in less than a year and is seen as a significant move against the backdrop of imminent peace deal.

An official handout issued by the Foreign Office said the two sides discussed recent developments regarding the Afghan peace and reconciliation process. “The foreign secretary reaffirmed Pakistan’s resolve to continue to support the peace process and pursue positive development of Pakistan-Afghanistan relations,” the statement added.

Foreign Secretary Mahmood highlighted the grave human rights violations in Indian Occupied Jammu and Kashmir (IOJ&K), intensified ceasefire violations from the Indian side, belligerent rhetoric of the Indian civil and military figures, and India’s aggressive measures along the Line of Control (LoC). The importance of the international community’s role in peaceful resolution of the dispute was alsio emphasized during the meeting.

Referring to Foreign Minister Shah Mehmood Qureshi’s recent visits to Saudi Arabia, Iran and the United States, and his telephone conversations with other foreign ministers, Mahmood underscored that Pakistan remained committed to supporting the efforts for de-escalation of tensions and promoting the prospects of a diplomatic way forward on the differences and disputes in the Middle East.

A range of other bilateral issues, including political engagement and economic partnership, were also discussed, according to the FO statement. It was emphasised that a strong trade and investment relationship was key to advancing the shared vision of the leadership of both countries for a long term, broad-based and enduring partnership, it added.

Wells later called on Special Assistant to Prime Minister Nadeem Babar at the Petroleum Division. She was accompanied by US Ambassador to Pakistan Paul Jones.

Babar briefed the US Assistant Secretary of State for South and Central Asia on Pakistan’s energy sector. He highlighted recent reforms undertaken by the government, leading to improvement in ease of doing business in the country and new investment opportunities in the power sector.

Wells expressed satisfaction on her recent meetings in the country and the momentum in bilateral relations. She stressed the need to increase cooperation in renewable energy sector with a focus on wind energy.

Both sides agreed to maintain such contacts and cooperate on a mutually beneficial basis.