Fall from grace: A once famed college could turn into a ghost

Fall from grace: A once famed college could turn into a ghost 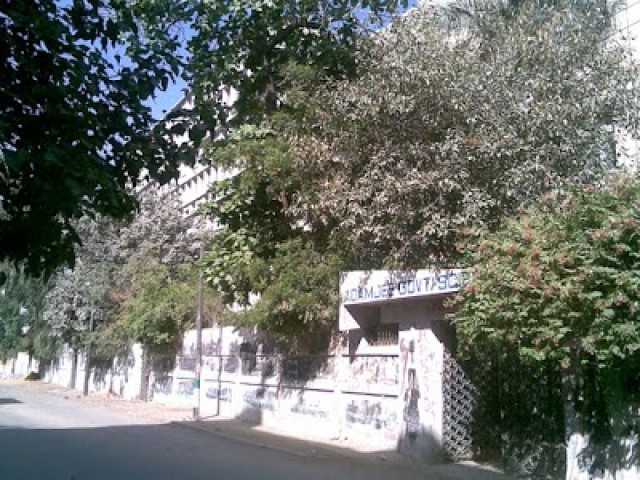 KARACHI: There was once a time, not so long ago in fact, that the Adamjee Government Science College (AGSC) was renowned as one of Karachi’s most prestigious public sector high schools.

Year after year, the college built its reputation by producing some of the best engineering and medical talent that would sweep admissions in the country’s top universities. Its alumni count among themselves some of the best doctors and engineers in Pakistan.

As recently as 2018, AGSC students secured both the second and third positions in pre-engineering and third position in computer science in Karachi. The result followed a long trend, recorded all the way back to 2011, of producing position-holders on the regular. In 2017, a student from AGSC secured first position in pre-medical. In 2011, all top three performers in pre-engineering were AGSC alumni.

Inaugurated by then president Ayub Khan in 1961, renowned scientist Dr Iqbal Chaudhry lauded AGSC’s long history of academic excellence in a message in the college’s magazine two years ago.

Of late, however, the once prestigious public college is not even a shadow of its former self. In the absence of a permanent head, academic activities at the college have virtually come to standstill, complain students and school staff. The former complained that most teachers either show up to classes late or not all, forcing them to look for alternate means to prepare for board exams. They also complained that the institute’s cleanliness and hygiene are not being looked after.

A visit to the school by The Express Tribune confirmed the students’ gripes with AGSC. Where its timetable dictates that classes must begin at 8:30 AM, only three members of the college’s 40-strong faculty were in premises till 10:30 AM.  The departments of statistics, chemistry and mathematics were locked, as were the offices of the administration department and the principal. Many classrooms were deserted, and the ones that were not had students left completely unsupervised.

“We were very excited to enroll in this college,” said one student from a group approached by The Express Tribune during the visit. “We thought Adamjee, given its reputation, would set us apart from other college students.”

“We spoke to our seniors and they told us the situation was completely different last year,” said another student. “Classes were punctual and they told us that teachers would also be available for extra help after hours. That was the promise that brought us here. But now that we are here, we find everything to be the opposite,” he added.

“All of us were eager to come to college on time till last semester because classes started on time,” said a second-year Inter student. “Now, most of us feel we are wasting our time if we come. Many just show up for practical classes, but even on those, teachers are often absent.”

“A chemistry teacher actually told me to attend the tuition centre he was running on the side if I was keen on learning something,” complained another.

Speaking to The Express Tribune on condition of anonymity, an AGSC teacher confessed that most of the faculty members spend their time sitting in their departments when they show up to college. However, he blamed the situation on college authorities’ negligence. “There is no one to inquire after teachers. I agree that this is gross injustice towards some of Karachi’s brightest and most talented students.”

Where did the principal go?

The move had the unfortunate consequence of leaving AGSC ‘headless’. In the absence of any Grade 19 or 20 associate professor to take up the vacant post, Urdu teacher Mohsin Sheikh was asked to step in as acting principal in the interim.

According to members of the school’s staff, that is where AGSC’s problems began. Mohsin, they complained, has habit of not coming in or coming in late. “We complained to him, that many teachers were taking advantage of his absence and neglecting their duties, and that maintenance was being ignored, but our concerns fell on deaf ears,” said one staff member.

When contacted, Mohsin said despite commitments with higher ups in education authorities, he was doing his level best to improve things at the college and ensure smooth running.

“Sometimes, there are pressing meetings I have to attend. The secretary or the director general calls me. Other times, it’s some other official commitment, like an event at the Khatoon-e-Pakistan College a few days back that prevents me from coming in on time,” he responded when asked about allegations of being late. “But even so, I come to the office every day and we do our level best to improve things at Adamjee,” he insisted.

Asked about teachers’ absences, Mohsin said the college faculty is currently understaffed. “There are a few teachers who are leaving the college due to promotions, which has thrown academic activities here into disarray. We are working on bringing in permanent replacements,” he said. Other teachers, he claimed, were on leave for various reasons.

At the same time, Mohsin also claimed the students themselves were responsible for some of the ‘disruption’. “Many of them leave mid-session to take tuitions. We have issued a circular calling them back. A similar circular has also been issued to teachers,” he said.