Youth was teachi­ng his friend's father how to drive when the lesson went awry
By ​ Our Correspondent
Published: January 19, 2020
Tweet Email 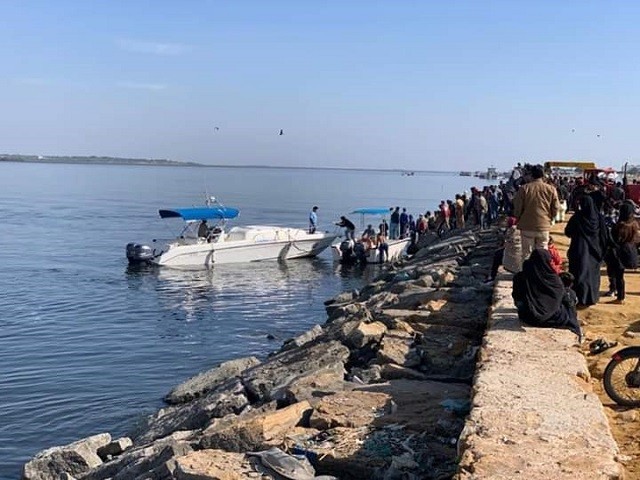 Youth was teaching his friend's father how to drive when the lesson went awry.PHOTO: TWITTER/Halaat Updates

KARACHI: Two men drowned after a car plunged into the sea during a driving lesson in Karachi’s Defence Housing Authority (DHA) Phase 8 on Sunday.

Although they were both alive when drawn out of the water by rescuers, they passed away before arriving at the Jinnah Postgraduate Medical Centre (JPMC).

The deceased were identified as 45-year-old Iftekhar, son of Allah Ditta, and 20-year-old Daniyal, son of Abdul Aziz. While initial reports stated that they were father and son, they appear to be unrelated.

The white Suzuki Alto drove into the water after the driver lost control of the car on an empty ground near Area 51, a private club. The car was immediately submerged, while a crowd gathered there, shouting for help.

Staff belonging to the club, police, Rangers, DHA security officials and other rescue teams arrived on the spot and launched an operation to find and rescue the men trapped in the car.

Two people were in the car when it plunged into the sea. South SSP Sheeraz Nazeer told The Express Tribune that while one of them was pulled out of the water during initial efforts and rushed to JPMC, it took longer to rescue his companion.

Divers from a private club situated nearby were able to locate the car after an hour and a half. Heavy machinery and a crane were also sought for the operation, and the car was lifted out of the water. The other man present in it was then shifted to the JPMC.

An eyewitness confirmed that there were two people in the car. “One of them was teaching the other how to drive when the driver lost control of the car and it plunged into the water,” he said. “The dirty water meant that nothing could be seen and rescue teams faced a lot of difficulty in getting them out.”

According to Darakhshan SHO Azam Ali Gopang, people visit the area in large numbers for picnics. He said that the police had received a report that a car had fallen into the sea. “The staff of a private club were already at the spot when they arrived while the DHA security force had also been summoned.

“The first person was drawn out of the water and shifted to the JPMC by the staff of the club in critical condition,” he related. The second passenger and the car, meanwhile, were taken out of the water under the SHO’s supervision.

SHO Gopang said that the second man was still breathing when he was pulled out of the water. “First aid was given to him immediately in the ambulance, due to which he started throwing up,” he said. “He was then shifted to the JPMC in critical condition too, but the hospital administration later confirmed the death of both men.”

Speaking to The Express Tribune, JPMC Executive Director Dr Seemin Jamali said that both the men were dead when brought to the hospital.

Muhammad Nawaz, a relative of Iftekhar, said that the deceased was a government employee at the General Post Office and a resident of Akhtar Colony. He said that Iftekhar had not known how to drive a car and Daniyal was trying to teach him.

Meanwhile, a relative of Daniyal told The Express Tribune that Daniyal, a resident of Punjab Colony, was a close friend of Iftekhar’s son, who had asked Daniyal to teach his father how to drive.