Railwa­ys minist­er says despit­e crises, nation has no other option but PM Imran
By Our Correspondent
Published: January 18, 2020
Tweet Email 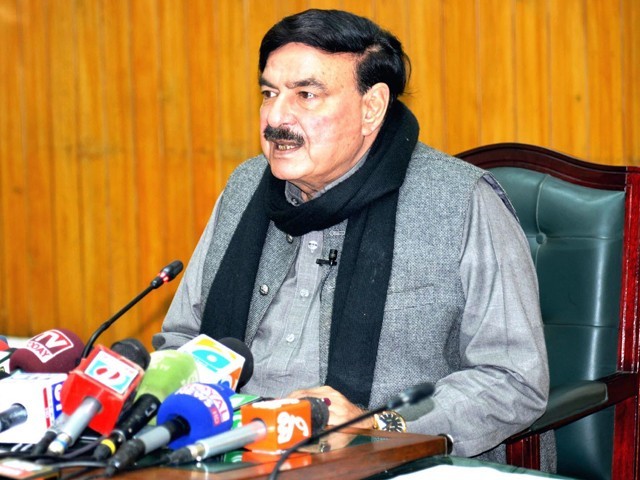 Railways minister says despite crises, nation has no other option but PM Imran. PHOTO: ONLINE

Addressing a new conference in Lahore, Rashid said he would only back Buzdar as long as Prime Minister Imran Khan wanted him to remain the chief minister.

“I am an ally of Imran Khan, not a spokesperson for the PTI,” he said in response to a query.

“But Fawad Chaudhry is a strong, brave man and that’s why he said it in front of everyone,” he added.

Conceding that the country was in the grip of a myriad of crises including shortage of gas and flour, the minister insisted that the nation had no other option but PM Imran.

“There will be gas, power and flour crises but we will overcome them under the leadership of Imran Khan,” he said. “The government needs at least another one and half years to overcome these challenges.”

The railways minister also predicted that former premier Nawaz Sharif would not return to the country. “Neither will Nawaz Sharif return, nor will Maryam [Nawaz] leave the country,” he said, adding that more cases would be filed against PML-N President Shehbaz Sharif and the daughter of the former prime minister in the coming days.

Speaking in riddles, Rashid maintained that Shehbaz must be allowed to achieve the purpose for which he had gone to London.

“Shehbaz belongs to my party. He should ask me before returning [to Pakistan] and even if he does, then Assalamalekum,” he said dropping hints in his usual manner.

The minister said despite rumours, he had predicted the PML-N and the PPP would support the passage of the Army Act amendments.

“Now they are backing the government behind the scenes on the NAB law and there will be consensus on the appointment of the chief election commissioner as well.”

At a recent meeting of the PTI’s core committee in Islamabad, Fawad was quoted as saying that the Punjab government was failing to deliver and that was piling pressure on the ruling party.

Fawad’s outburst wasn’t spontaneous. It shows shouldering grievances within the ruling coalition as well as within the ruling party are finally igniting. It became all the more evident in Wednesday’s sitting of the National Assembly where PTI lawmakers accused some federal ministers of selling jobs in their respective ministries.

“Twenty-one jobs were sold out in the railways ministry for Rs150,000 each. I can provide a list,” Sardar Riaz, a PTI MP from Rajanpur, alleged while speaking on the floor of the house. The allegation was dismissed by the parliamentary secretary, though.