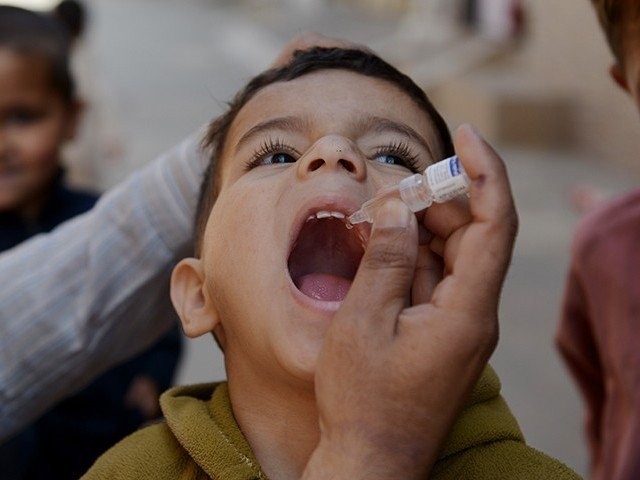 Around 400,000 polio markers from India costing $108,000 are lying at the Islamabad airport, according to the health ministry.

Pakistan has recently paid $0.4 million in advance to an Indian company for 1.42 million polio markers.

The government has granted one-time permission to import WHO pre-qualified finger markers from India amid the suspension of trade between the two countries since August this year.

Islamabad was unwilling to import the markers from India. However, China, which was the only other country that manufactured the markers, was blacklisted by the World Health Organisation in April 2018.

Officials told The Express Tribune that health ministry had approached the Commerce Division seeking permission to import WHO pre-qualified markers from India for polio campaigns.

A summary was sent to the prime minister seeking his approval for allowing the health ministry to import WHO pre-qualified polio markers through the WHO from India. Subsequently, the Prime Minister’s office intimated that the premier wanted the matter placed before the federal cabinet. A summary was presented in cabinet on November 26.

The cabinet had considered the summary and directed that under given current standoff with India, the required markers should be procured from any other WHO-certified source. In case it was not feasible to procure the product from any other source, the case should be submitted before the cabinet with cogent explanations.

The health ministry explained that polio finger markers were not ordinary ones and were essentially sensitive due to their indelibility keeping in view the safety of the children.

Pakistan imported the markers from China until April 2018 when it was blacklisted by the WHO. Since then, 3.2 million markers through 10 shipments were procured from India until the suspension of trade.

The WHO and UNICEF are the key implementing partners of Pakistan’s polio eradication programme assisting the government’s efforts to effectively reach and vaccinate children under five in Pakistan.

Last month, Prime Minister Imran Khan urged the nation to support his government’s anti-polio efforts to ensure uninterrupted journey of economic progress and building a positive image of the country.

“Unfortunately, Pakistan is among only two countries which still have traces of polio, despite numerous successes rendered by polio staff,” he added.

The prime minister said the eradication of the polio virus was vital for the future of the whole nation.

Pakistan must uphold national interests amid ME tensions: experts