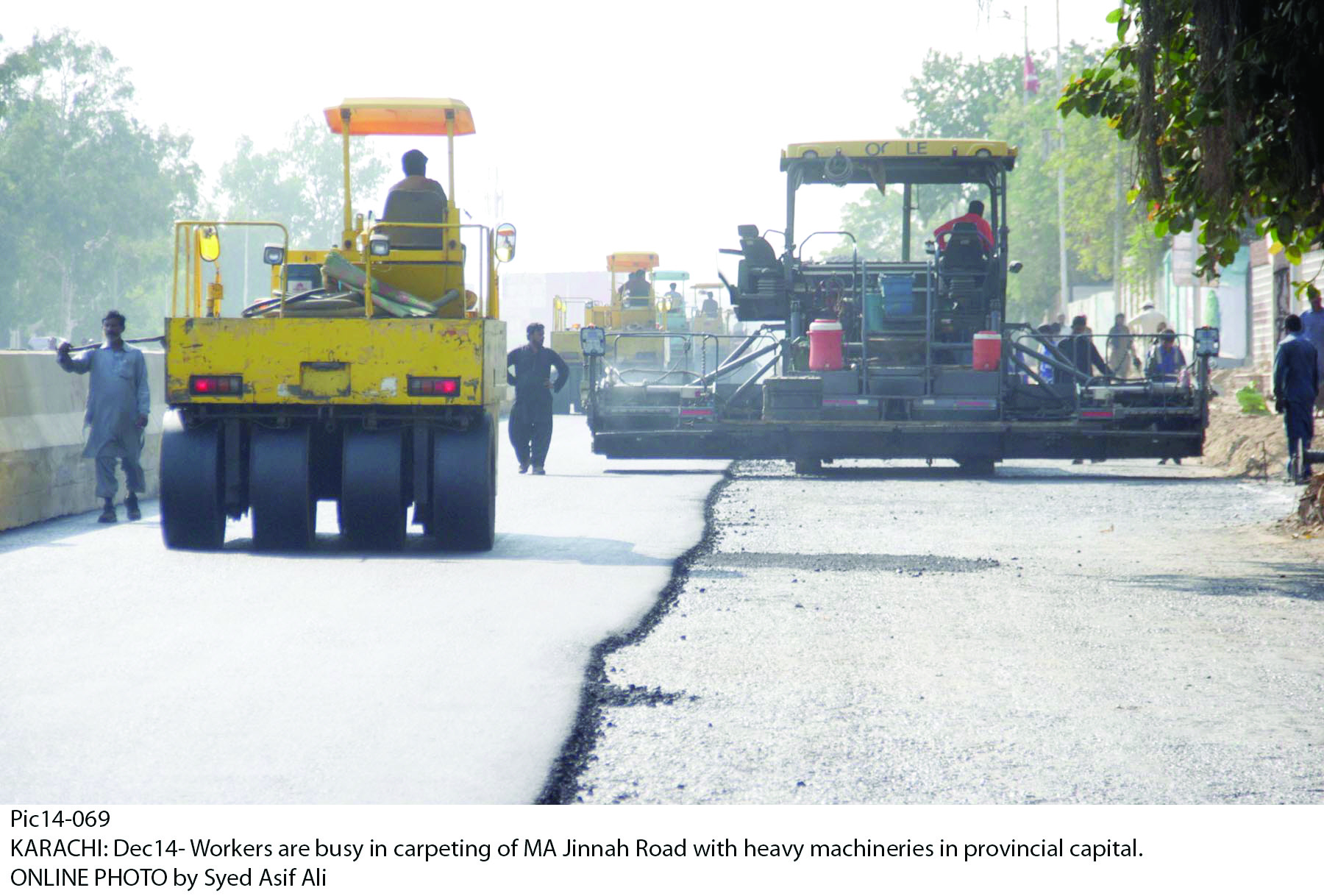 Carpeting work is being carried out on MA Jinnah Road. The busy thoroughfare and its connecting roads have been closed to traffic for months, making life difficult for motorists. However, some roads in the area are scheduled to partially open this week. photo: online

KARACHI: The upper part of the Numaish Chowrangi underpass, the construction of which was delayed for the past couple of years, is partially being opened for traffic next week. The move will give some relief to motorists as the incomplete structure had turned out to be a traffic nightmare for the citizens of Karachi.

Per sources, the two-way road between Britto Road and Shahrah-e-Quaideen and the road from Gurumandir to Numaish Chowrangi will be opened for traffic on December 20. Other routes connected to Numaish Chowrangi, however, will remain closed due to development work.

In February 2020, all roads leading from Numaish intersection, MA Jinnah Road and related roads will be opened for traffic, but the construction work under Numaish Chowrangi underpass will continue. The entire project of the underpass is scheduled to be completed by May 2020.

According to a survey conducted by The Express Tribune, the carpeting of road has been completed on both the tracks of Shahrah-e-Quaideen adjacent to Numaish Chowrangi. However, construction work is underway on Britto Road. The final carpeting of the road has been completed from Gurumandir to Mazar-e-Quaid at Numaish, while the track between Numaish Chowrangi and Gurumandir is under construction.

The track between Gurumandir and Imam Bargah Ali Raza has also been temporarily opened for traffic amid ongoing development work and parking issues. However, the narrow lane with the two-way traffic poses a serious risk of accidents. Alongside vehicles, trucks and dump loaders also continue to use the road to supply the material and machinery for construction. Meanwhile, the track from Capri Cinema to Numaish Chowrangi remains closed for traffic.

Phase I of the Green Line Project covers a 17-kilometre track from Surjani Town to Gurumandir. The civil works for Phase I are complete, while the construction of stations and depots is about to be finished. The second part of Phase I covers a track from Numaish Chowrangi to Taj Medical Complex but it has been delayed for the last three years.

On the other hand, phase II of the project, which extends from Taj Medical Complex to Municipal Park, has not even started yet. The development work on Numaish Chowrangi has been postponed several times. As per the original plan of the federal government, this part was supposed to have an elevated structure, but after an objection raised by the management board of the Quaid-e-Azam Mausoleum, the federal government decided to change the design and build an underpass.

By the end of 2017, when the tender award was given for the construction of the underpass, the Sindh government raised an objection that the land concerned had to be used for the Red Line Bus Project in future, while a Blue Line Bus Project was also planned in front of the Karachi Goan Association Ground. The provincial government contested that the federal government should also reserve some space alongside the underpass for provincial projects.

As a result, the construction work for the Green Line Project was halted for several months. At the request of the Sindh government, the federal government amended the design of the project again and awarded new contracts which took about eight months. Finally, in October 2018, the Numaish Chowrangi was completely closed for traffic for the construction of the underpass.

Due to the ongoing development works, all the roads linked with the MA Jinnah Road and the surrounding roads have been closed due to which citizens commuting to Saddar, Tower and II Chundrigar Road have been subject to much misery.

The Numaish Chowrangi has been the busiest intersection of the city as it links ten passages and lanes, including the busiest main roads and two small roads. MA Jinnah Road is the most important thoroughfare from Gurumandir, Numaish and Capri Cinema, while Shahrah-e-Quaideen and Britto Road near Numaish are also two-way roads. Moreover, there are two smaller roads originating from the Parsi Colony Road and Nizami Road from where the traffic flows towards Numaish Chowrangi.

According to sources, around 150,000 vehicles pass through the intersection every day. However, the construction work on the site has been forcing commuters to take alternate routes, including tracks from Soldier Bazar, Garden and Shahrah-e-Faisal.

Saleh Farooqi, the chief executive officer of Sindh Infrastructure Development Company Limited, told The Express Tribune that work on the underpass at Numaish Chowrangi is almost complete and development work on the sidewalks is also underway.

‘In the absence of gatekeepers, digital spaces have their own problems’