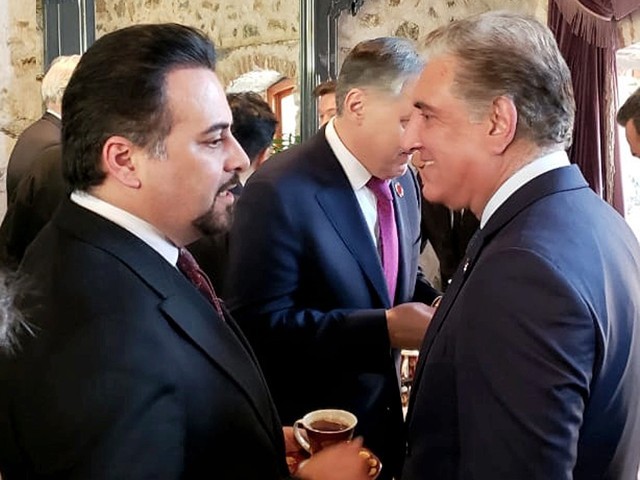 ISLAMABAD: Foreign Minister Shah Mehmood Qureshi cautioned against the “spoilers of peace”, even though he sounded optimistic about the ongoing peace talks between the US and Taliban at an Afghanistan-centric conference in Istanbul on Monday.

The 8th ministerial meeting of the Heart of Asia-Istanbul process was attended by host Turkey as well as immediate neighbours of Afghanistan and other regional and international players including the United States.

Qureshi, however, walked out of the conference hall the moment the Indian minister began his speech. He boycotted his speech to register protest over India’s grave human rights violations in Occupied Kashmir.

In September, Qureshi also boycotted the speech of Indian External Affairs Minister SJ Shankar during the meeting of SAARC foreign ministers at the sidelines of the UN General Assembly session.

A statement issued by the Foreign Office said Qureshi underscored the need for achieving the goal of a secure and stable Afghanistan for the economic progress and prosperity of the entire region.

He said that neither any nation could claim to have stronger and more historic bonds with Afghanistan nor any country was more desirous of peace, stability and prosperity in Afghanistan than Pakistan.

Pakistan continued to host over three million Afghan refugees for the last four decades and had been playing a critical role for the development and reconstruction of Afghanistan, including by committing over US$ 1 billion in development assistance, he added.

Qureshi highlighted the importance of the Afghanistan-Pakistan Action Plan for Peace and Solidarity (APAPPS) as an important institutional framework in strengthening bilateral relations between the two sides.

He also underlined that the recent resumption of efforts for reaching peace and stability in Afghanistan was a positive development, and expressed Pakistan’s wish to see the peace process lead to an all-inclusive intra-Afghan negotiations.

At the same time, he cautioned against the “spoilers” in view of their vested interests. He urged the international community to seize the opportunity for achieving lasting peace in Afghanistan by reaching a broad regional and international consensus.

His statement came as US and Taliban this week resumed talks in Doha after a break of three months. Pakistan is believed to have played a key role in bringing the two sides to the negotiating table.

The foreign minister also held a brief interaction with US Acting Assistant Secretary for South and Central Asia Alice Wells on the sidelines of the meeting during which matters relating to enhancing Pakistan-Afghanistan bilateral trade were discussed.

Qureshi also met his Turkish counterpart Mevlut Cavusoglu. During the meeting, the two sides expressed their desire to continue expanding their relations to new areas of mutual interest, in particular by expanding bilateral economic relations.