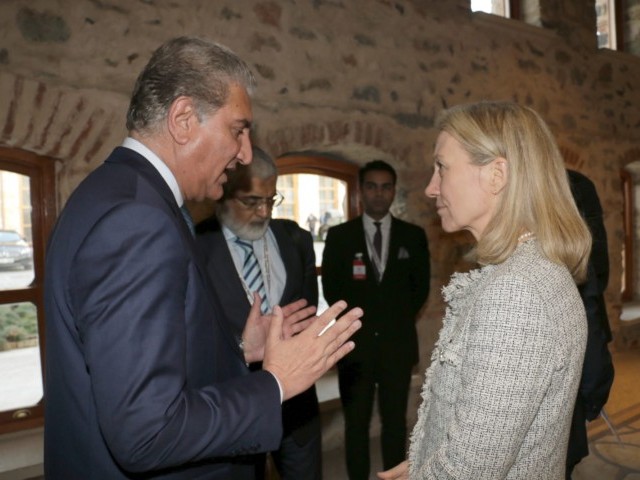 ISTANBUL: Foreign Minister Shah Mehmood Qureshi on Monday boycotted the speech of the Indian delegate at a regional conference in the Turkish city of Istanbul.

The 8th Ministerial Conference of Heart of Asia-Istanbul Process – which seeks to promote peace in Afghanistan – was convened on Monday at Dolmabahce Palace under ‘Peace, Partnership, Prosperity’ theme.

As soon as Indian Minister VK Singh opened his speech at the conference, Foreign Minister Qureshi rose in his seat and walked out of the hall.

The boycott was in protest against brutalities in Occupied Kashmir by India which has turned the disputed region into a “gigantic prison” for millions of Kashmiris, according to tweets posted by Pakistani officials from the venue.

Occupied Kashmir has been under siege since August 5 when Prime Minister Narendra Modi’s government revoked limited autonomy for the region and clamped a curfew to stop Kashmiris’ anger from spilling on the streets.

Pakistan has highlighted the Indian draconian step at every international forum, but the world community remains unmoved to the plight of Kashmiri people. Pakistan has scaled down diplomatic relations and snapped trade ties with India in protest against the move.

It wasn’t the first time Qureshi registered protest at international events. In September, Qureshi had boycotted the speech of Indian External Affairs Minister S Jaishankar at a SAARC ministerial meeting on the sidelines of the UN General Assembly in New York.

In his speech, Erdogan called on the international community to boost investments in Afghanistan during “sensitive” times the country has been going through.

“Afghanistan has been going through a sensitive period. As international community, we need to boost the investments we have been making for Afghanistan for the last 18 years,” he added.

Erdogan stressed that a significant number of the problems faced by the people in South Asia were arising from outside of their borders and said that people in this region had to struggle with the negative impacts of the developments that had “nothing to do with them”.

“I believe that the Heart of Asia-Istanbul Process is also very useful and effective in providing regional support for peace,” he said.

The Turkish leader said the Istanbul Process was providing an exemplary regional cooperation model which enables the regional problems to be dealt with in solidarity.

He noted the importance of supporting Afghanistan to prevent terror organisations from regrouping in the country. Turkey would do its best to eradicate Da’ish/ISIS terror group in Afghanistan, he added.

Underlining the significance of the private sector, Erdogan said it would play a key role in economic and social development of Afghanistan adding that Turkey welcomes the steps accordingly.

He recalled the NATO meeting in London last week and said the member states reiterated their commitments to continue contributing to security in Afghanistan.

Erdogan called on NATO countries to continue their support for Afghanistan, and vowed that Turkey would maintain its support for the country in economic, commercial and social fields as well as in increasing the capacity of the country’s army and the police forces.

Erdogan said while the international community was committed to its pledges to Afghanistan, it is important that the Afghan government also fulfills its obligations. “We welcome the positive steps taken by the Afghan government in the implementation of the Mutual Accountability Framework adopted in Geneva last year,” he added.

The Heart of Asia-Istanbul Process – a regional initiative of Afghanistan and Turkey launched in 2011 – has two chairs with Afghanistan as the permanent chair, and a co-chair from among the member states that shifts each year.

“The process aims to promote regional security, economic and political cooperation centered on Afghanistan through dialogue and confidence building measures,” according to the organization’s website.

At the ongoing conference, Turkey will hand over its co-chairmanship, which it assumed in 2017 at the 7th Ministerial Conference in Baku, to Tajikistan.