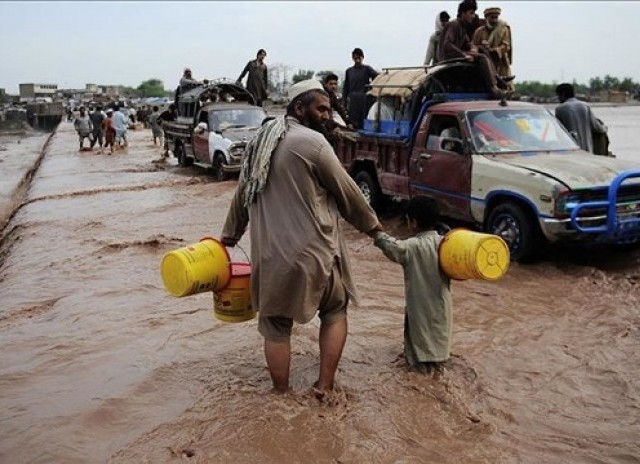 KARACHI  : Extreme weather patterns, shrinking agriculture, sea erosion, and lingering dry spells have caused widespread migration within Pakistan in the past decade, according to officials and local experts.

More than two million people were displaced by floods that inundated one-fifth of the country in 2010, triggering mass migration from rural to cities.

Of that figure, almost 70% did not go back to their hometowns and permanently settled in big cities to make a living because of the destruction to their homes and farmlands, Ministry of Climate Change spokesman Muhammad Saleem told Anadolu Agency.

He said seasonal, long-term and permanent migrations mainly due to drought and floods, had taken place in southern, southwestern, and northeastern Pakistan in the last 10 years.

About 700,000 people migrate to big cities from rural Pakistan annually on long-term, and permanent basis, he said, citing international surveys.

Pakistan recently has been placed fifth on the list of countries vulnerable to climate change by the Global Climate Risk Index for 2020.

Pakistan lost 9,989 lives, suffered economic losses worth $3.8 billion and witnessed 152 extreme weather events from 1999 to 2018, according to the Global Climate Risk Index.

The data also indicates the government, as well as the world, is not taking enough measures to cope with challenges and risks climate change poses to Pakistan.

Pakistan is annually losing more than $4 billion due to climate change disasters.

According to a report from the Climate Change Ministry, the country lost $80 billion from 1996 to 2016 because of climate change calamities.

The alarming fact is that climate migration is taking place in all four provinces – Sindh, Punjab, Khyber Pakhtunkhwa (KP), and Balochistan – and the northern Gilgit-Baltistan region.

“Almost 50% of Pakistan’s population is increasingly becoming vulnerable to climate change, which may trigger another wave of mass migration”, Saleem, who has specialization in climate change communications, observed.

The ministry has no official statistics, but Saleem believed 15% to 20% of the country’s total 210 million population had moved to big cities from rural areas from the four provinces since 2010 floods.

“[The] last nine years have been the worst period for Pakistan in terms of natural disasters like floods, drought, a decline in rains and heatwave. Over the years, these disasters have destroyed or damaged hospitals, schools, roads, sources of livelihoods in different parts of the country speeding up influx from rural to urban centres,” Saleem said. “A few years back, the rural-urban population ratio was 40-60. Now it is fast becoming otherwise.”

Amar Guriro, a Karachi-based analyst who regularly writes on climate change and environment, supported the view putting the numbers of climate migrants at 30 million in the last 10 years.

A lingering dry spell, he said, had gradually shrunk the agriculture and herding in southern Thar desert and several districts of southern Punjab and southwestern Balochistan provinces, propelling a mass migration to the big cities in recent years.

“The three regions are more vulnerable because they totally depend on agriculture and herding, which depend on the weather, and the weather is marred by climate change,” Guriro told Anadolu Agency.

“Prolonged summers, drought, a decline in rainfall, extreme weather patterns and frequent heat waves, have become a new normal in several parts of the country damaging the local economy and demography”, he opined.

A combination of sea erosion and intrusion has submerged several Indus river delta islands, mainly in the Thatta, Badin and Sajawal districts of the southern Sindh province in the last few decades compelling local communities to migrate to the nearby districts or the port city of Karachi, the country’s commercial capital.

Keti Bandar, once a port city on the Arabian Sea near Thatta district, is one of the glaring examples of how climate change has affected the local communities.

The city, which had had its own municipal corporation until 1921, has been relocated four times in the last 40 years due to rising sea levels.

“A consistent sea erosion has engulfed nearly three million acres of land, apart from submerging scores of villages in Thatta, Badin and Sajawal in the past 40 years,” Mohammad Alsi Shah, who heads Pakistan Fisherfolk Forum, a non-government organization that works for the advancement of the fishermen community, told Anadolu Agency.

“And the phenomenon is accelerating day by day due to rising sea levels,” he added.

According to Shah, more than one million people from the coastal areas of the three districts moved to Karachi and other cities because of sea intrusion and erosion in the past four decades.

Construction of dams and diversion of river water, he said, had further added to growing sea intrusion already sprawling more than 124 miles (200 kilometres).

Normally, rains mitigate impacts of dry spells, however, instead of giving relief, unseasonal rains have prolonged the drought-like situation in several areas.

“The unseasonal rains [in November] – a direct result of climate change — instead of bringing some relief to Tharis, have further added to their miseries not only in terms of destroying the standing crops but also their investments,” Guriro said.

“Now, it’s not only drought but also unseasonal rains, which may force many Tharis to move to adjoining districts,” he observed.

Thar desert, which forms a natural boundary with neighbouring India, spans a region of 124,000 miles (200,000 kilometres), has a population of 1.5 million and is ranked by the World Food Program as the most food-insecure region in the country.

In the northern scenic Gilgit-Baltistan region, which borders China, landslides and glacier lake outburst floods (GLOF), which are the outcome of global warming, have submerged scores of villages and destroyed infrastructure, forcing local communities to move to other areas.

Thousands of people were displaced after a massive landslide blocked the River Hunza creating a natural lake, Attabad, in 2010.

The rising water immersed scores of villages, farmhouses and a 12-mile stretch of Karakorum Highway, which connects Pakistan with China.

“Melting glaciers and landslides have posed a serious threat to the local population, and infrastructures in several parts of Gilgit-Baltistan region,” Zahid Hussain, a Gilgit-based environmentalist told Anadolu Agency.

The melting of glacial ice, in particular, he said, had already created artificial lakes in different parts of the region displacing thousands from their ancestral places.

“On a safe side, I am quoting the figures [of displaced people in the region] in thousands because the government authorities have no official statistics in this regard,” Hussain said.

Northern Gilgit-Baltistan region is home to the six peaks of more than 26,200-foot (8,000-meter) altitude, including the world’s second tallest peak, K-2.

In addition to that, the region has over 5,000 large and small glaciers and more than 100 lakes, which jointly make up the world’s largest freshwater reservoir.