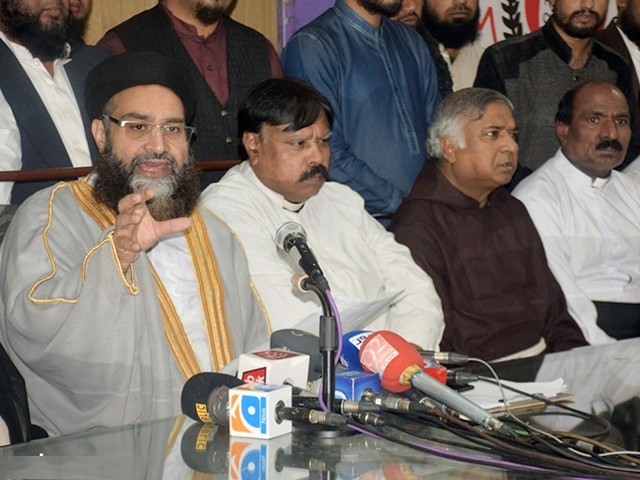 Scholars belonging to different religions and Islamic sects joined hands on Sunday to condemn a recent incident of desecration of Holy Quran in Norway and demanded effective legislation at world level to ensure sanctity and honour of all religions.

Addressing a news conference after attending an inter-faith conference in Lahore on Sunday, Allama Tahir Ashrafi, flanked by scholars of Muslim, Christian and Sikh faiths, said that elements having extremist mindset do not represent any religion.

He demanded of the government and leadership of European Union, United Nations and Organisation of Islamic Cooperation (OIC) to take action on rising Islamophobia around the world.

Ulema and religious scholars also lauded the Muslim youth, identified as Umer Ilyas, who prevented a far-right leader from desecrating the Holy Scripture in the Norwegian city of Kristiansand last week. However, Lars Thorson, the leader of Stop the Islamisation of Norway (SION) group, threw it in a waste container in the presence of a police contingent.

Ilyas, who was arrested by the Norwegian police at the site, is being hailed as hero by Muslims worldwide after a video clip showing him attacking Thorson went viral on social media.

The religious scholars also urged the world leadership to take effective steps to promote interfaith harmony, adding that desecration of religious places and scripture cannot be allowed in the name of freedom of expression.

“Islam is a religion of peace and harmony. Teachings of Islam and Quran-o-Sunnah advocate annihilation of extremism and terrorism,” Allama Ashrafi said. He also demanded of the world community to expose elements doing propaganda against Islam and Muslims.

The religious leadership also lauded impromptu stance of DG ISPR and Foreign Office for summoning the envoy of Norway to register the country’s protest over the incident.

Responding to a query, Allama Ashrafi said the burning issues of Muslim world including Kashmir and Palestine could be settled with unity and stability of Muslim Ummah.

He also lauded the responsible role Prime Minister Imran Khan and Chief of Army staff (COAS) General Qamar Javed Bajwa were playing to unite the Muslim world and to bridge the differences of Arab world with Iran and Turkey.

The conference also condemned brutal lockdown of Indian Occupied Jammu and Kashmir. Hafiz Tahir Ashrafi also underlined that peace and stability in the world could be ensured with peace and settlement of Kashmir and Palestine issues.

He regretted that the religious minorities in India were facing the worst human rights crisis. Babri Masjid verdict has exposed the extremist mindset of the Narendra Modi government.

Ashrafi, the chairman of Pakistan Ulema Council and president of Wafaq-ul-Madaris, also announced that a similar conference followed by an important press conference at National Press Club will be held in Islamabad on Monday.