Such action­s cannot be justif­ied in the name of freedo­m of expres­sion, says Foreig­n Office­
By Our Correspondent
Published: November 23, 2019
Tweet Email 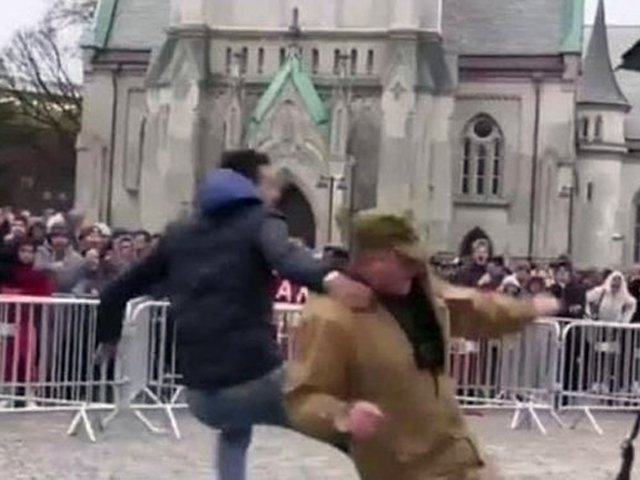 A Muslim man could be seen jumping into the barricaded circle to save the holy book from being desecrated. SCREENGRAB

ISLAMABAD: Pakistan summoned Norway’s ambassador to the Foreign Office on Saturday to express “deep concern” over the recent desecration of the Holy Quran in the Norwegian city of Kristiansand.

Last week, the head of Norway’s extreme right-wing group, Stop the Islamisation of Norway (SION), held a protest against Islam and attempted to burn a copy of the Holy Quran.

A Muslim man, identified as Umer Ilyas, prevented Lars Thorson from desecrating the Holy Scripture, but the group’s leader threw it in a waste container in the presence of a police contingent.

Ilyas, who was arrested by the Norwegian police at the site, is being hailed as hero by Muslims worldwide after a video clip showing him attacking Thorson went viral on social media.

“Pakistan’s condemnation of the action was reiterated,” said the Foreign Office in a statement. “It was underscored that such actions hurt the sentiments of 1.3 billion Muslims around the world, including those in Pakistan,” it said, adding that such actions could not be justified in the name of “freedom of expression”.

The chief military spokesperson took to Twitter to “salute to brave Ilyas” for his courage. “Salute to brave Ilyas for displaying courage to stop an absolutely deplorable action,” DG ISPR Major General Asif Ghafoor wrote on his personal handle.

“Such Islamophobia-based provocations only promote hatred and extremism. All religions are and must stay respectable. Islamophbia is threat to global peace and harmony,” he said.

Salute to brave #Ilyas for displaying courage to stop an absolutely deplorable action. Such Islamophobia based provocations only promote hatred & extremism. All religions are and must stay respectable. Islamophbia is threat to global peace and harmony.#TheGloriousQuran#Norway pic.twitter.com/CRahq5mazf

Minister for Religious Affairs and Interfaith Harmony Noorul Haq Qadri said Pakistan would lodge its protest with the Norwegian government on the matter. The minister stressed that Western countries should take steps towards checking such shameful acts.

Renowned religious scholar Mufti Taqi Usmani urged the Muslim nations to raise the issue at international level and called for the release of Ilyas.

Mufti Usmani, in a Twitter post, said the West that lectured the Muslim fraternity on tolerance had reached the lowest level of cowardice by holding rallies to desecrate the Holy Book of 1.3 billion Muslims. The cleric said it was a duty of Muslim states to raise the issue globally and work to ensure that Ilyas was released.

Despite a large Muslim population in Kristiansand, Norway, authorities not only permitted the violent rally by the avowedly anti-Muslim group but also did not stop Thorson from committing the sacrilegious act. Muslims across the world, including Norway, while condemning the act have called for registering a case of hate crime against Thorson.

Prime Minister Imran Khan had eloquently raised the issue of growing Islamophobia in his speech at the 74th session UN General Assembly. “Islamophobia since 9/11 has grown at a pace which is alarming,” he said and blamed certain Western leaders for it.

He also addressed the issue of religious satire, and the strong reactions it elicits in the Muslim community, and said the perception that such reactions are exaggerated stems from a lack of knowledge and understanding of the way people think about religion.

“When I first went to England, there was a comedy film on Jesus Christ. That’s unthinkable in Muslim societies,” he said, adding that any kind of criticism or mocking of the Prophet (PBUH) generates emotional pain amongst his followers. So he asked to be sensitive toward this, rather than assume that all cultures accept the same standards.

“In human communities we have to be sensitive towards what causes pain to other human beings,” he said. “In the Western society, and quite rightly, the Holocaust is treated with sensitivity, because it gives the Jewish community pain. That’s all we ask: Do not use freedom of speech to cause us pain by insulting our holy prophet. That’s all we want.”

‘A Muslim cannot teach us our religion’: Sanskrit professor goes into hiding in India