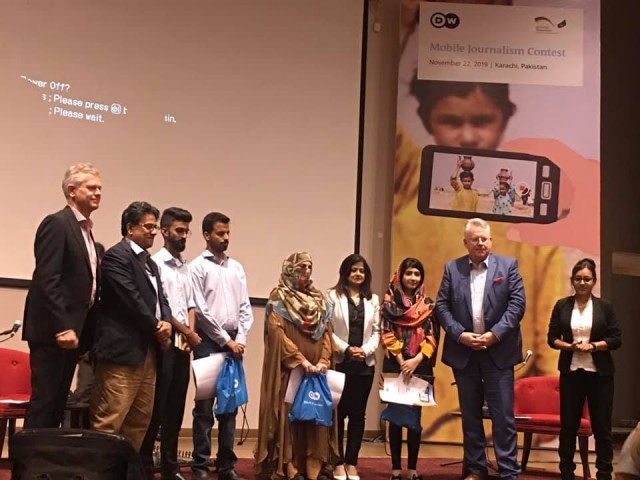 KARACHI: Journalists in Pakistan continue to face immense challenges in the quest to seek the truth. From receiving death threats to reporting in perilous, war-torn regions and facing censorship issues, the prolonged list of challenges is a ghastly reality that haunts the future of journalism in the country.

Pakistan is among the states where journalists get murdered, ranking 142nd out of 180 on the World Press Freedom index. The issues have even more severe implications when there are rural and tribal areas in question due to the social dynamics and various limitations.

Aspiring citizen journalists from the rural areas were rewarded for their exemplary storytelling abilities at a ceremony held at the Institute of Business Administration.

Part of the ‘Mobile Journalism Contest’ organised by Germany’s international broadcaster Deutsche Welle (DW), media development organisation, DW Akademie and partners Individualland, Media Training and Research Centre and Tribal News Network, at least 36 participants, comprising 23 women, took part in the competition. Out of the 12 finalists, Sameera Latif was chosen the winner followed by Razia Mehsud on the second spot and Nusrat Abbas on the third.

Addressing the event, Limbourgh said that the DW can help and contribute in matters pertaining to censorship and freedom of speech and encourage people who are trying to get closer to the truth. “Freedom of expression is something very crucial and I know we have cultural differences, but I think this is a worldwide phenomenon that we see freedom of opinion is under pressure,” he said.  “It’s important that we in the West do not forget Pakistan.”

The award ceremony also had a brief panel discussion that shed light on the relevance of mobile journalism in today’s age and other issues pertaining to freedom of speech.

Chairing the discussion, former information minister, senator and author, Javed Jabbar, said that he does recognise that freedom of expression in Pakistan is under perhaps unprecedented pressure, yet out of the 56 predominantly Muslim countries, he believes, Pakistan today has the highest, most robust level of freedom of speech.

“We need to struggle and protect the liberty and freedom but it is not all gloom and doom,” said Jabbar, as he started the conversation.

Talking about the growing trend of mobile journalism, Tayyab Afridi, the director of Tribal News Network, said that mobile journalism has empowered individuals but its implementation in the areas that are inaccessible is quite different from the cities.

Gulmina Bilal, the executive director of Individualland – a consultancy and advocacy group – was of the view that mobile journalism is the ‘only tool’ for media practitioners and citizen journalists. “Ask the journalists as to how many times have they resorted to at least thinking about mobile journalism as their only avenue to express themselves,” she said.

“It is not just a sense of empowerment, I am a little concerned about it too because it [mobile journalism] also spearheads misinformation,” continued Bilal, as she stressed that there is a need to differentiate between mobile literacy, mobile usage and journalism.

Dr Shah Jehan of the Media Training and Research Centre, while talking about young people practicing mobile journalism, underscored that the tragedy of the region is that they weren’t aware of journalism ethics.

“I think we should train and educate them [youngsters] even at the school level. Mobile journalism should be included in the syllabus,” said Shah Jehan, as he presented the solution to the issue of self and social regulation.