With the growin­g popula­tion of stray dogs becomi­ng a menace for citize­ns, Edhi steps up once again
By Sameer Mandhro
Published: November 20, 2019
Tweet Email 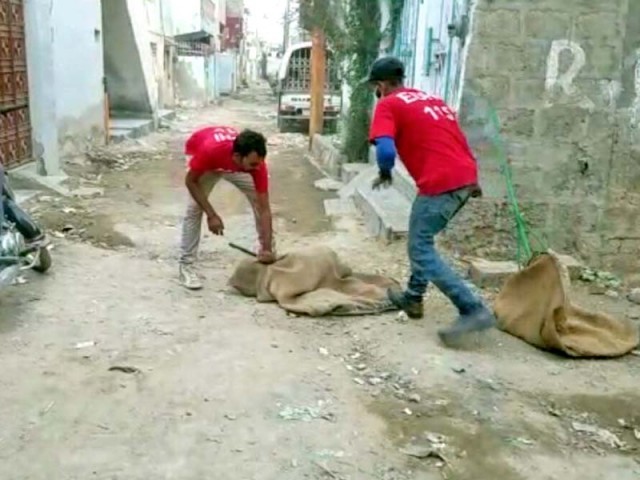 With the government machinery unable to control the growing population of stray dogs, Edhi workers have sprung into action and are visiting areas across the city to catch them. PHOTO: NNI

KARACHI: Not all superheroes wear capes. In Karachi, you will find them in red shirts with ‘Edhi’ written in large bold letters across the front. But even if they are not extolled for everything that they do for the people of Karachi, they continue doing their jobs silently, not expecting a word of gratitude or appreciation in return.

With the large gaping void left by the Sindh government, it is institutions like the Edhi Welfare Foundation that have kept the city functioning thus far. Be it the world’s largest ambulance service, the cemetery for unclaimed or unidentified bodies, the orphanages or the welfare homes, the EWF has quietly helped the city stay afloat in the absence of political will and apathy.

The latest in their acts of benevolence is the rescue operation initiated by the EWF to get stray dogs off the streets. Over the last couple of months, EWF workers have rescued over 3,000 stray dogs from different areas of the city. “A couple of months ago, we received some calls regarding stray dogs and that is then we decided to start this campaign,” the EWF spokesperson, Muhammad Bilal, told The Express Tribune.

Currently, said Bilal, they were receiving around 30 calls from different parts of the city. “There are 12 dedicated workers who catch stray dogs round-the-clock,” he added. “The workers have to visit the entire city. It’s not an easy task for these boys but they have to address public complaints. And they do it properly,” he added.

For years, the Edhi workers have been collecting injured and sick animals from different parts of the city. The animals and birds they rescued included donkeys, horses, cats, crows and black kites. But dogs were a whole new experience. In the beginning, some of the workers were injured as it was the first time they had attempted to catch stray dogs – and that too, without any training. “They learnt how to handle stray dogs with the passage of time,” he explained.

Once caught, the dog is transported to the Edhi Animal Hostel located on the Super Highway near the Toll Plaza. The injured and sick are treated and neutered before they are let go in open spaces around the main highways. “The healthy ones are also released after 24 to 48 hours,” said Bilal, adding that the EWF did not have the capacity to keep all the animals for a longer period of time.

But what if Karachiites didn’t have the EWF to count on and had to pin their hopes on the government machinery to which they pay their taxes. When The Express Tribune contacted officials of various government agencies and departments to ascertain whose job it was to control the population of stray dogs, there was only confusion.

“It’s not our responsibility,” said Dr Syed Saif-ur-Rehman, the Karachi Metropolitan Corporation’s Metropolitan Commissioner. “There is bit of confusion, but we don’t deal this matter,” he clarified.

Explaining the complex system, Dr Rehman said that the District Municipal Corporations (DMCs) are responsible for controlling the population of stray dogs in their respective areas. “Our job is to handle municipal services, including looking after parks, roads, hospitals, libraries and other such activities,” he added.

For his part, an official of the local government department said that the system is neither confusing nor complex. “The officials at the ground level are not clearly briefed on whether they should kill the stray dogs as has been done in the past or a new method is being adopted to control the population,” he added.

The official said that some animal rights activists had raised a hue and cry over the inhumane way of culling dogs and had forced to abruptly stop the old system, without coming up with a formula of dealing with the growing population of stray dogs. “When nobody comes forward, Edhi workers step up to help,” said the official.

Role of the DMCs

There is no helpline set by either the provincial, city or district governments where citizens can register their complaints regarding stray dogs. “I was wondering who to call to catch stray dogs roaming outside my street,” said Muhammad Usman, a resident of Baldia Town. “And the only answer I got was to dial 115 [Edhi’s number].”

Usman said that he had lodged a complained at the Edhi helpline a couple of days ago and hopes that a truck will some come and catch at least a dozen stray dogs from his neighbourhood. He added that he had also sent a message to his Union Committee member, but had received no response.

The DMC chairpersons seem confused too. “There is a technical issue in the way we are now being told to control the population of stray dogs,” commented Jan Muhammad Baloch, the chairman of Malir DMC. “We were told not to kill stray dogs. Look at the growing population now,” he remarked.

“Yes, it’s our job to control the growing population of dogs in our areas,” admitted Baloch. “The drive was halted but we have recently decided to restart it. I have told the boys to bring Gulaab Jamun [a traditional sweet], add a capsule [of poison] to it and feed it to the dogs,” he said, adding that citizens normally call him on his cell phone if they have any complaints. “The uniform system of complaints doesn’t exist here,” he said, adding that residents have to approach their public representatives directly.

Like other DMC chairpersons, Baloch is unsure if the new method would be effective in controlling the population of stray dogs. The plan Baloch referred to was devised by the Sindh government on the directives of the Sindh High Court and involves vaccinating stray dogs and neutering them. The plan, according to the local government secretary, Roshan Sheikh, will ensure that there are “no stray dogs in Sindh after five to eight years”.

Baloch, however, is not too optimistic. “We have been hearing about these kinds of methods for years but nothing has happened,” said Baloch. “Such plans are never implemented. Let’s see what’s going to happen with this one,” he laughed.