PAF museum opens a new galler­y on Wing Comman­der Abhina­ndan whose jet was shot down in a dog-fight in Februa­ry
By Reuters
Published: November 13, 2019
Tweet Email 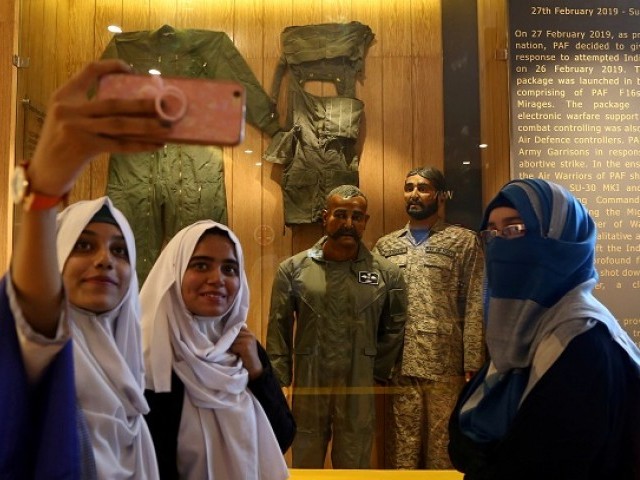 Students take selfies with a mannequin, representing Abhinandan Varthaman, after his Mig-21 fighter aircraft was shot down on February 27, at a gallery 'Operation Swift Retort' at the PAF museum in Karachi. PHOTO: REUTERS

KARACHI: The crude waxwork figure isn’t much to look at, although it does feature the famous moustache.

But Pakistan’s new museum exhibit on an Indian pilot captured when the two nations came close to war earlier this year is causing ire across the border.

Pakistan Air Force on Wednesday opened a new gallery in its museum on Wing Commander Abhinandan Varthaman, who was shot down in a dog-fight in February.

Abhinandan became the face of the crisis after Islamabad released a video of him drinking tea with Pakistani officers while in captivity.

He politely refused to answer questions in the video, but proclaimed the tea offered to him “fantastic”.

That tea cup, along with the pilot’s flight uniform and other items from the skirmish, are now displayed in the museum in Karachi.

A large effigy of the pilot, dressed in a copy of his Indian uniform, is also on show. During the crisis Indians rushed to barber shops to emulate Abhinandan’s trademark handlebar moustache, while the capture of the pilot become a symbol of pride for Pakistan.

“When Abhinandan tried to attack he was arrested and within two days he was returned as a goodwill gesture to give a message of peace,” said Hamna Shaikh, a college student visiting the exhibit.

“All his belongings are now here on display, it felt very good today seeing all these articles.”

The new exhibit is less popular in India, however, with footage of the display going viral on social media and sparking heated arguments online between Indians and Pakistanis about past wars.

Abhinandan, who was injured in the crash, returned to flying in September.

Officials from the Pakistan Air Force attending the opening of the gallery declined to comment on the exhibit. A spokesperson for the Indian Air Force did not respond to a request for comment.