CEO says more needs to be done as income is being spent on debt servic­ing
By ​ Our Correspondent
Published: November 13, 2019
Tweet Email 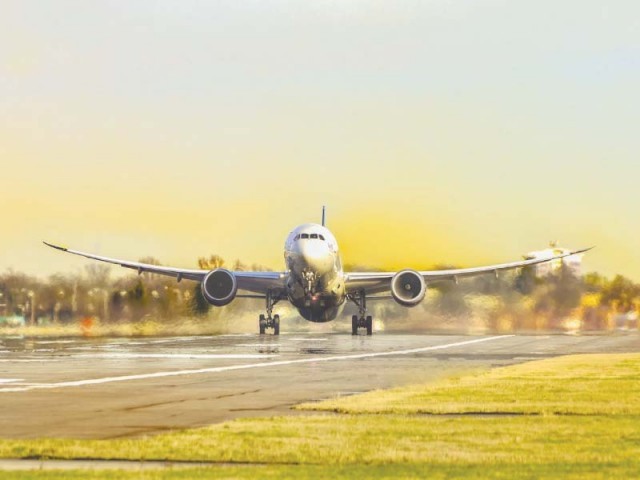 “The reduction in operational losses became possible only due to day and night efforts of the PIA team, comprising those officers who have been working in PIA for the past many years,” Malik said during a visit to the Karachi Chamber of Commerce and Industry (KCCI) on Tuesday.

“However, a lot more still needs to be done to deal with PIA’s liabilities as whatever is earned by the airline is mostly spent on debt servicing.”

PIA has a fleet of 31 aircraft, of which 23 were able to fly earlier. But “now 29 aircraft are in the air and only two are on the ground due to efforts of the PIA staff, particularly its engineering team”, said the CEO.

In order to expand the fleet, PIA has leased an aircraft (Airbus 320) from its own resources, which will arrive on November 14 while another aircraft will reach in December.

Three to five wide-body aircraft will also be added to the fleet next year, which will certainly facilitate those members of the business community intending to take direct flights to Canada and London.

“PIA has the potential to grow but unfortunately due to poor policies and management style the issues faced by the airline were largely ignored over the past 10 to 12 years, which resulted in overstaffing and excessive liabilities,” he said.

“All the policies and decisions were dictated in the past but it is not the case anymore as all decisions are now purely taken by the management keeping in view the business and commercial viability,” he emphasised.

Referring to PIA’s cargo operation, Malik said only 20% of the available capacity was earlier being airlifted, which had now been improved to 80% because of cooperation from the business community.

“The airline needs support and we will reduce our cargo rates as compared to the market rates if people choose PIA’s cargo facility,” he added.

Turning to Hajj flights in 2019, the PIA CEO stressed that it was for the first time that the entire Hajj operation was solely carried out by PIA. About 83,000 pilgrims were facilitated without leasing any aircraft while Sukkur and Quetta stations were also made operational for the Hajj pilgrims this year.

He also directed the PIA official concerned to make arrangements for signing a memorandum of understanding with the KCCI by next Monday for setting up a PIA office in the chamber premises, which would provide extra services and facilities to the business community.

Speaking on the occasion, former KCCI president Siraj Kassam Teli suggested that PIA should carry out an evaluation of the number of employees as it was a well-known fact that the airline was overstaffed mainly due to hiring on political grounds in the past.

He pointed out that a lot could be done by PIA to promote tourism in Pakistan and in that regard the air carrier needed to improve its flight schedule in coordination with travel agents.

Earlier, KCCI President Agha Shahab Ahmed Khan, in his welcome address, recalled that PIA had a very splendid past, back in the 60s and 70s, when the airline was booming and was even providing training to other carriers. However, unfortunately with the passage of time, PIA’s performance continued to decline and it was now facing a severe financial crisis and overstaffing issues.

“We have to look at the entire timeline and analyse what went wrong during this period and accordingly take steps to make PIA a profitable organisation,” he suggested.