Sindh govt has propos­ed the consti­tution of a 20-member task force, which would includ­e animal rights activi­sts
By ​ Our Correspondent
Published: November 8, 2019
Tweet Email 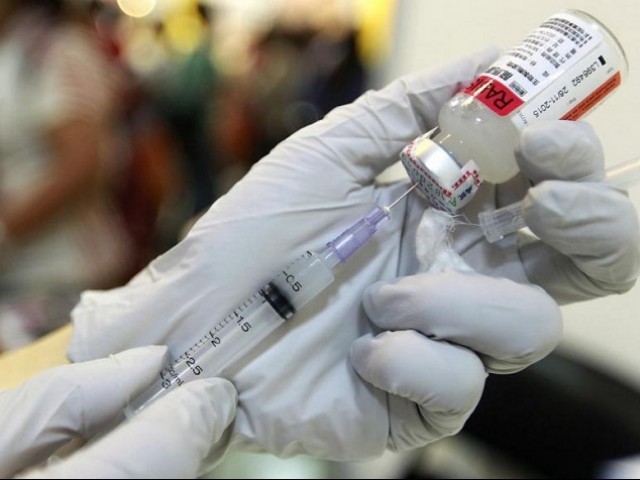 A veterinarian prepares a dosage of rabies vaccine. PHOTO: REUTERS

KARACHI: The Sindh High Court (SHC) ordered on Thursday the Sindh government to issue the notification for the formation of a task force to check the rising incidence of rabies cases and the growing population of stray dogs in the province.

The order came on a plea pertaining to the non-availability of Anti-Rabies Vaccines (ARVs) in public hospitals and the growing population of stray dogs across the province.

A two-member bench, comprising Justice Muhammad Ali Mazhar and Justice Agha Faisal was hearing the plea filed by Advocate Tariq Mansoor. During the hearing, the additional local government secretary, Zahid Ali Khemito, presented the department’s response which included the names of 20 persons who would be part of the proposed task force.

The task force, according to the government’s response, would be headed by a special secretary of the LG department and would comprise the CEOs of cantonment boards, administration officials of housing societies and other civic agencies as well as animal rights activists such as Zain Mustafa, Ayesha Chundrigar and Ariana Magsi.

Man dies due to unavailability of rabies vaccine in Karachi hospital

LG additional secretary Khemito added that the provincial government would issue the notification regarding the formation of the task force today (Friday).

The LG department, in its written response, has also stated that the PC-1 for the project, ‘Fight against Rabies and Population Control of Dogs’ has already been sent to the chairperson of the Planning and Development Board for approval. At this, the court gave a 15-day extension to the government for the approval of PC-1.

Meanwhile, the other respondents including the Karachi Metropolitan Corporation, Sindh Health Department and other relevant agencies also submitted their replies.

According to the health department’s report, there are 13,483 vials of Anti-Rabies Vaccine (ARV) available in public hospitals across the province.

At this, Justice Mazhar remarked that they had recently been informed that the Abbasi Shaheed Hospital (ASH) didn’t have the vaccines. The KMC’s Senior Health Director said, however, that ASH does have the vaccine.

The petitioner argued that the vaccine was not given to a citizen, Saleem, at the ASH and he had died six months later at the Jinnah Postgraduate Medical Centre.

The KMC director reasoned that this was an old case. The patient hadn’t visited the hospital for a follow-up, otherwise, the vaccine would have been provided to him. He added that they were now registering details of patients so that they could be called for follow-up visits.

Reports regarding the operations against stray dogs in Central and West districts were also presented before the court, as were replies by the Clifton and Faisal cantonment boards. Meanwhile, the counsels representing the Karachi Port Trust and the Karachi Cantonment Board sought an extension for the submission of replies.

The court ordered all the parties to take full-fledged action to control the number of stray dogs in the city and remarked that no specific law was required to protect the citizens from stray dogs, therefore the relevant agencies should make ad-hoc efforts.

The bench also ordered the Additional Advocate General to make the task force operational and get the PC-1 approved as soon as possible, adding that the chief secretary would be summoned if there was no progress in the next 15 days. The hearing was adjourned till December 4.