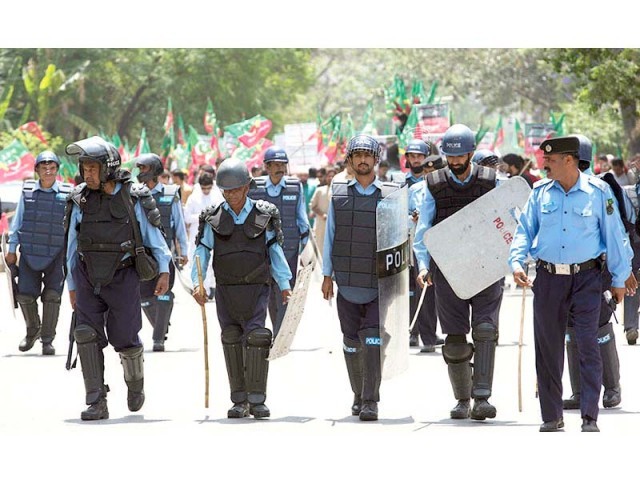 ISLAMABAD: Anti-riot police force clashing with the protesters is a common sight. These officers are routinely organized, equipped, and deployed to confront crowds, protests, and riots all over the world. But as Islamabad gears up to receive its largest congregation of protesters, it once again seems to be short on the number of anti-riot police officers.

The federal capital, which has witnessed several protests in the last few years, only has 600 dedicated anti-riot police officers. Backed by 7,000 members of the capital police, the handful group of the anti-riot unit will serve as the front line force as Jamiat Ulema-i-Islam-Fazl (JUI-F) chief and thousands of his supporters begin their demonstration in the federal capital this week.

According to details, the Pakistan Muslim League – Nawaz government plans to upgrade the federal anti-riot force with an addition of 2,000 officers. However, like most promises, the plan was shelved and left for the next administration.

With the economy running into headwinds and most promises made during the fiercely contested 2018 polls, unfulfilled, the JUI-F party led by Fazl-ur-Rehman, plans to camp in the federal capital. To mount political pressure on the fledgeling government, tens of thousands of protesters are on their way to the capital, calling on the prime minister to resign.

While the participants of the anti-government march have been restricted to Islamabad’s H-9 area, protests of this nature and magnitude tend to spiral out of control.

To prevent any mishaps, the federal police force had requested the government to keep the demonstrator away from the capital. However, acting against the advice, the government has allowed the protesters to camp 9 kilometres away from the Red Zone, which is peppered with key federal buildings.

Islamabad is not new to such political showdowns. In 2014, Imran Khan and Tahirul Qadri staged the longest sit-in against the Nawaz Sharif government. At one point during the demonstration, thousands of anti-government protesters swarmed towards the parliament, cutting through the barricades designed to keep them away from the most sensitive areas of the capital city. The clashes with police resulted in some deaths.

Putting up a brave face this time, the federal police force claims to be prepared to handle the protesters. In its efforts to maintain law and order in the capital, the primary capital law enforcement force will rely on additional support from other paramilitary forces. More than 10,000 Frontier Constabulary (FC) and Punjab Constabulary personnel will guard parts of the federal capital to prevent protesters from causing trouble.

In addition to the paramilitary forces, army units have been deployed to protect key government buildings.