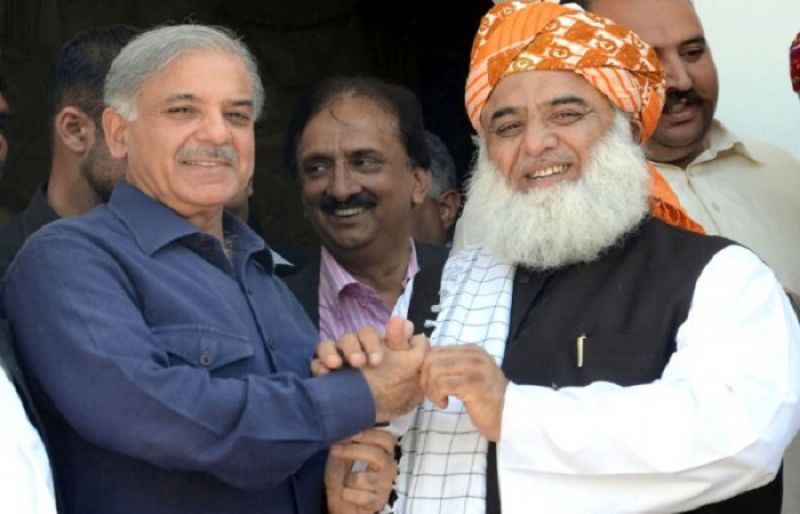 Jamiat Ulema-e-Islam-Fazl (JUI-F) chief Maulana Fazlur Rehman has prayed for early recovery of former prime minister Nawaz Sharif, who was taken to a hospital after his health deteriorated in the National Accountability Bureau’s custody in Lahore last night, in a telephonic conversation with the latter’s brother Shehbaz Sharif.

Nawaz is expected to undergo a platelet transfusion on Tuesday as the vital blood cell count dropped further after being shifted to Services Hospital.

Maulana Fazl, who is leading an opposition march on Islamabad to topple the “illegal and selected” government of Prime Minister Imran Khan next week, expressed concern over a sudden decline in Nawaz’s health, Express News reported.

“The government is using institutions for political victimisation,” he was quoted as saying during the telephonic conversation. The JUI-F chief demanded best possible medical treatment for the three-time premier at the Lahore hospital.

Dr Adnan Malik, Nawaz’s personal physician, had said the former premier’s platelet count fell due to “multiple pathologies”, but the NAB blamed a blood-thinning medication for the drop in the platelet count.

Nawaz’s son Hussain, on the other hand, claimed on Twitter that the reason for his father’s deteriorating health could be “poison” too as it is known to reduce platelet count.

Meanwhile, Shehbaz after visiting his brother at the hospital expressed grave concerns over his fast deteriorating health condition. “I am gravely concerned and worried on his fast deteriorating health condition. The government must shun its apathy and attend to his serious health issues. I appeal to the nation to pray for Mian sahib,” he wrote in a tweet.

Visited my brother Nawaz Sharif in hopspital earlier today. I am gravely concerned & worried on his fast deteriorating health condition. The government must shun its apathy & attend to his serious health issues. I appeal to the nation to pray for Mian sahib.