Khalil­zad in Kabul for first time since deal with Taliba­n collap­sed in Septem­ber
By Kamran Yousaf
Published: October 28, 2019
Tweet Email 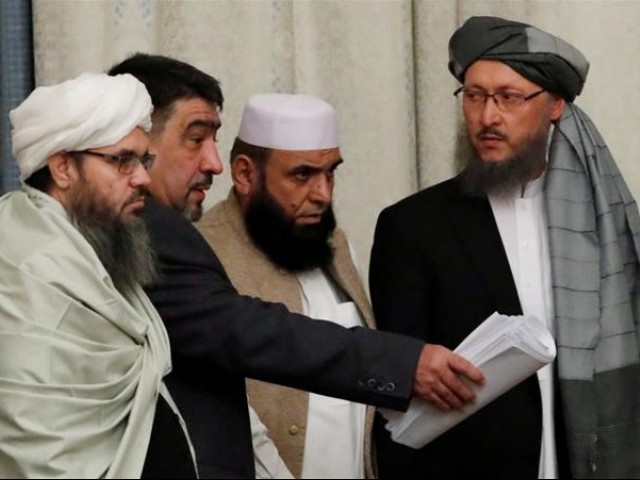 ISLAMABAD.: Peace talks between the United States and the Afghan Taliban are expected to resume soon after hectic behind-the-scene efforts, involving Pakistan and certain other players, which seek an end to the 18-year conflict through negotiations, officials familiar with the development told The Express Tribune here on Sunday.

The US and the Afghan Taliban were close to striking a deal last month but President Donald Trump pulled out of the peace process, citing insurgent group’s continuous attacks on the American forces.

Efforts, however, were being made to bring the two sides back to the negotiating table. Pakistan has been at the forefront of seeking an early resumption of the reconciliation process.

On Friday, Pakistan joined Russia, China and the US in Moscow to discuss the stalled peace process.

A Foreign Office official, who was briefed on the four-party talks in Moscow, told The Express Tribune that US Special envoy Zalmay Khalilzad indicated that Washington was mulling to return to the negotiating table.

However, Khalilzad, who previously held a series of meetings with Taliban representatives in Doha to break the stalemate, said the US wanted reduction in the level of violence before resumption of talks with the Taliban.

Pakistan, Russia and China also agreed that all parties should reduce violence in order to create conducive environment for the revival of peace process.

The representatives of these three countries also urged the US to return to the negotiating table as they believed that the Afghan war could only end through peace process.

But the major stumbling block is believed to be Taliban’s unwillingness to commit to a ceasefire or reduction in violence.

Pakistan, China, Russia urge US to resume talks with Taliban

The possibility of a ceasefire or at least reducing the level of violence was discussed when Afghan Taliban delegation led by Mullah Abdul Ghani Baradar and Ambassador Khalilzad met in Islamabad earlier this month.

The two sides had since been in touch to find a way out of the current deadlock in talks, said the official.

On Sunday, President Trump’s top negotiator for Afghanistan was in Kabul to brief the Afghan president on peace efforts on his first trip back since Trump ended talks with the Taliban aimed at ending America’s longest war.

The visit by Zalmay Khalilzad comes after a flurry of low-key meetings that he has held, including with the Taliban this month in Pakistan.

“The aim of his visit is clear, to report to President Ghani on his recent visits and meetings in some countries regarding the Afghan peace process,” an official in Afghan President Ashraf Ghani’s office said.

The Taliban have refused to talk to Ghani’s government, denouncing it as a US puppet.

Khalilzad had been pressing the Taliban to declare a ceasefire with Afghan government forces and make a commitment to power-sharing talks. The Taliban said that would follow a deal on the withdrawal of all foreign forces.

The Taliban were ready to stand by the tentative agreement struck before Trump cancelled the talks.

The Taliban, who met other Afghan groups in Moscow and are set to engage in intra-Afghan dialogue in China, have refused to engage with Kabul administration calling it a US puppet. The group, nevertheless, insisted that they would talk to other Afghan players once the deal was struck with the US regarding the timetable for troops’ withdrawal.