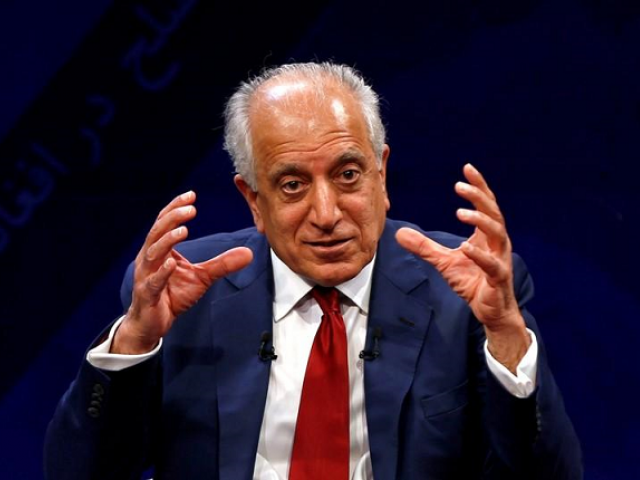 US envoy for peace in Afghanistan Zalmay Khalilzad speaks during a debate at Tolo TV channel in Kabul, Afghanistan April 28, 2019. PHOTO: REUTERS

KABUL: US President Donald Trump’s top negotiator for Afghanistan was in Kabul on Sunday to brief the Afghan president on peace efforts on his first trip back since Trump ended talks with the Taliban aimed at ending America’s longest war.

The visit by Zalmay Khalilzad comes after a flurry of low-key meetings that he has held, including with the Taliban this month in neighbouring Pakistan.

Pakistan, China, Russia urge US to resume talks with Taliban

“The aim of his visit is clear, to report to President Ghani on his recent visits and meetings in some countries regarding the Afghan peace process,” an official in Afghan President Ashraf Ghani’s office said.

Talks with the Taliban on a plan to withdraw US troops from Afghanistan in exchange for Taliban security guarantees were halted by Trump last month following the death of a US soldier and 11 other people in a Taliban bomb attack in Kabul.

Before the US-Taliban talks broke off, both sides said they were close to reaching a deal, despite concerns among some US security officials and Afghan government officials that a US withdrawal could bring more conflict and a resurgence of militant factions.

The Taliban have refused to talk to Ghani’s government, denouncing it as a US puppet.

Khalilzad had been pressing the Taliban to declare a ceasefire with Afghan government forces and make a commitment to power-sharing talks. The Taliban said that would follow a deal on the withdrawal of all foreign forces.

The Taliban were ready to stand by the tentative agreement struck before Trump cancelled the talks, according to Pakistani officials and militant group sources, who said the insurgents were eager to resume negotiations.

Trump too, despite calling off the talks, is keen to end US involvement in Afghanistan, which began weeks after the Sept 11, 2001, attacks on the United States.

The United States has about 12,000 troops in Afghanistan.