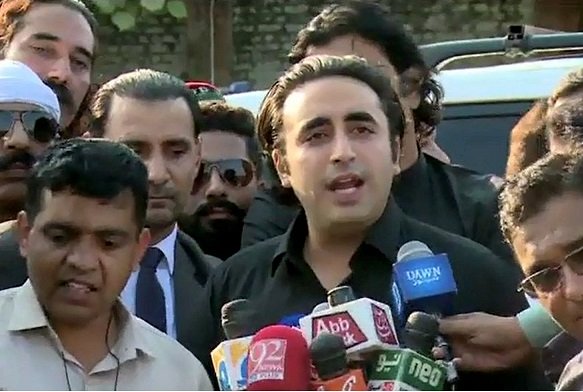 The remarks by the PPP chairman – while speaking to the media – come at a time when the government is gearing up to face a protest in Islamabad led by the JUI-F with the support of other opposition parties.

“With his [prime minister’s] resignation, all issues in Pakistan would be resolved,” said Bilawal.

Lamenting that no attention was being paid to Asif Ali Zardari’s ailments, Bilawal claimed that the government is trying to pressurise the PPP by using such tactics.

Referring to the ruling PTI’s protest in 2014, the PPP chairman reminded the prime minister of his first address in Parliament and said: “In his first address to the Parliament after taking office, Imran Khan had said if any party wants to protest, his government will provide food and containers for the protest.”

“Unfortunately, the government itself is now locking down the capital amid JUI-F’s Azadi March. This does not happen in a democracy that one pressurises the NAB and the judiciary to intensify a crackdown against opponents.”

Bilawal also reiterated his pledge to overthrow the government and send it home.

“Prime Minister Imran Khan is a hurdle when it comes to the restoration of democracy, economic revival and media freedom. He is the biggest problem in Pakistan. That is why; he should resign and spare the lives of the people. Every issue can be resolved after his resignation.”