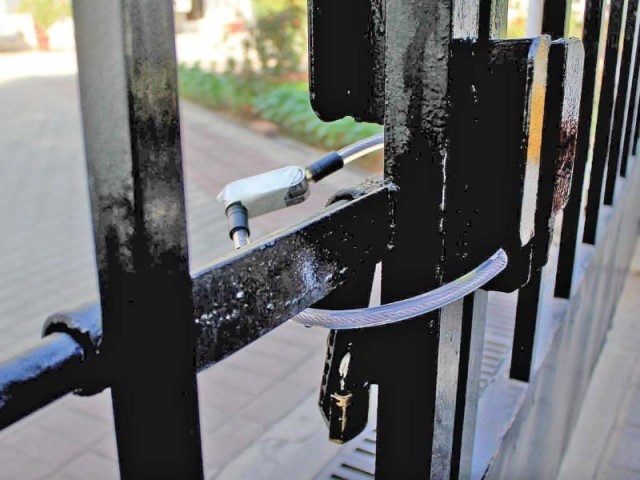 The main entrance of PMDC wired locked after council was dissolved. PHOTO: NNI

ISLAMABAD: A day after the federal government abruptly dissolved the apex regulator of medical colleges and doctors in the country before replacing it with a medical commission through an ordinance, employees of the Pakistan Medical and Dental Council (PMDC) protested against the dissolution of the council.

The protest was arranged on a call of the Pakistan Medical and Dental Council (PMDC) Employees Movement, members of which also staged a sit-in in front of the council’s locked headquarters.

The protesters said as many as 220 employees of the body had lost their jobs overnight owing to the government decision, adding that they will continue their protest until the government reverses their decision to dissolve the body.

The federal government had dissolved the PMDC and established the Pakistan Medical Council (PMC) for the regulation of the medical profession in the country.

An official of the health ministry said that a new ordinance titled Pakistan Medical Commission Ordinance 2019 had been signed by President Dr Arif Alvi to regulate and control the medical profession by establishing a uniform minimum standard of medical education and training and recognition of qualifications in medicine and dentistry.

“The commission will give preference to sacked PMDC employees in the recruitment process,” the official further said.

The new PMC will comprise nine members while its head will be called the president. It will include three members each from the civil society and those with a medical background, one with the dental background. The members from the medical and dental background will have 20 years’ experience in their respective field. Other members will include a surgeon general from armed forces’ medical service and the president of the College of Physicians and Surgeons Pakistan (CPSP).

PMC has been allotted the powers of issuing and renewing licences of doctors while all records of PMDC, including accounts commission, have been moved to the new body.

The new commission is expected to start work this week.

Separately, the Supreme Court (SC) on Monday issued notices to the federal health secretary, Attorney General for Pakistan (AGP) and the executive director (ED) of the Pakistan Institute of Medical Sciences (Pims) in a contempt of court petition filed over the service structure of hospitals operated by the federal government.

The notice was issued by a two-member bench of the SC, comprising Justice Gulzar Ahmad and Justice Munib Akhtar.

During Monday’s proceedings, Advocate Iftikhar Gillani, the counsel for petitioner Dr Shumaila, contended that on February 13, the apex court had granted the health ministry three months to create service rules.

Justice Ahmad remarked that the condition of hospitals in Khyber-Pakhtunkhwa and Punjab are quite poor with doctors are on strike in both provinces.